In a blockbuster move that shocked the league, the New York Knicks traded their rising superstar, Kristaps Porzingis, to the Dallas Mavericks. 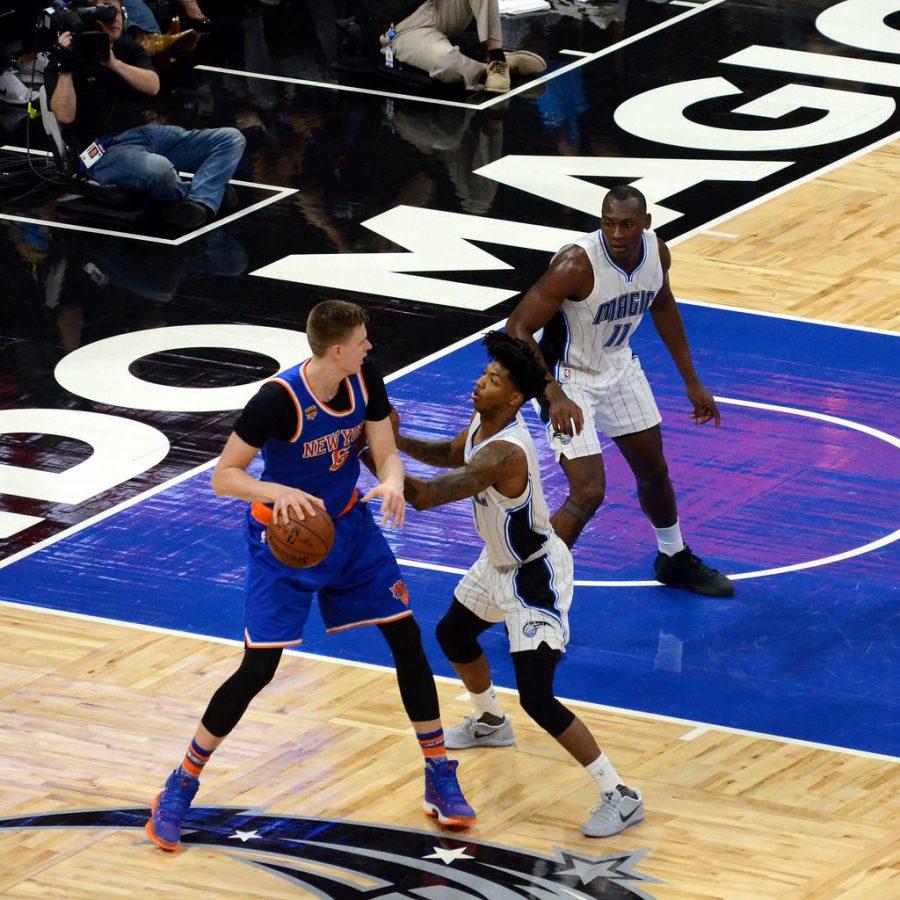 Former Knicks forward Kristaps Porzingis was traded to the Dallas Mavericks following a tense meeting with the organization on Thursday. (via Flickr)

And just like that, the Knicks’ superstar has left the Big Apple.

With the NBA trade deadline approaching, the biggest basketball news of the week came at the expense of the New York Knicks, who traded their franchise cornerstone, Kristaps Porzingis, to the Dallas Mavericks. The full trade included a package of Porzingis, Tim Hardaway Jr. and Courtney Lee from the Knicks, and Dennis Smith Jr., DeAndre Jordan, Wesley Matthews and two first-round picks from the Mavericks.

Porzingis was supposed to be the player to build around in New York for years to come. Drafted fourth overall in the 2015 NBA draft, Porzingis proved in his freshman season as a pro that he was an upcoming star in the league after finishing second in the Rookie of the Year voting that season. With a 7’3” frame, Porzingis earned the nickname “Unicorn” for his ability to shoot the deep ball and his agility for a seven foot man

For Knicks fans, calling this trade a shock is an understatement. Porzingis is already an established All-Star after earning a berth last season at only 23 years old. Porzingis has also voiced his love for the city in the past and his intentions to remain with the Knicks in the long run. While he expressed his loyalty to the city, he has preached that winning is a huge priority for him, something the Knicks have failed to do since he entered the league. Over the past three seasons, the Knicks have amassed at least 50 losses each season and are currently at 10-41 heading into the All-Star break.

From New York’s perspective, the Porzingis deal was a salary cap dump — in other words, the Knicks used Porzingis as an incentive for the Mavericks to take on the large salaries from Hardaway Jr. and Lee’s contracts. In return, the Knicks received one-year contracts in Jordan and Matthews, as well as a promising young point guard in Smith Jr. While the trade appears to be a huge win for the Mavericks, who obtained the best player in the trade, it is a confusing one to ponder from the Knicks’ point of view.

Dealing Porzingis on the final year of his rookie deal is baffling enough. After this season, he could have been a restricted free agent, meaning the Knicks could have matched any other team’s offseason offer to retain their superstar. The Knicks are also the team that could have offered him the most money.

Given that Jordan and Matthews have expiring contracts, it is likely that they are both either bought out of their contracts this season, or they play the rest of the season in New York and are not brought back next season. Essentially, this means the Knicks swapped Porzingis for Smith Jr. while dumping salaries onto the Mavericks. While Smith Jr. is a good player, the Knicks could have drafted him eighth overall in the 2017 NBA Draft. Instead they went with point guard Frank Ntilikina, who has yet to blossom. Smith Jr. was selected ninth overall by the Mavericks.

The fact the Knicks made the Porzingis trade a salary dump trade only means one thing — they plan to cash out in free agency this offseason. Some of the most notable upcoming free agents are Kevin Durant, Kyrie Irving, Jimmy Butler and Klay Thompson, all of whom are All-Stars. With the contracts they dumped on the Mavericks, the Knicks cleared up about $72 million in cap space to spend on not just one, but two max contracts. This means it’s possible for the Knicks to sign two of the most prominent free agents this offseason. After all, New York is a huge market and, no matter their record, will always attract free agents.

The Knicks committed to this offseason by dealing their franchise star, but if the Knicks fail to sign at least one high-value free agent this summer, the losing culture may continue in New York, and they will have lost their best player for virtually nothing.

A version of this article appeared in the Monday, Feb. 4, 2019, print edition. Email Zach Han at [email protected]