NYU recently issued a statement discussing the mounting criticism of NYUAD, maintaining that academic freedom is protected at the campus. 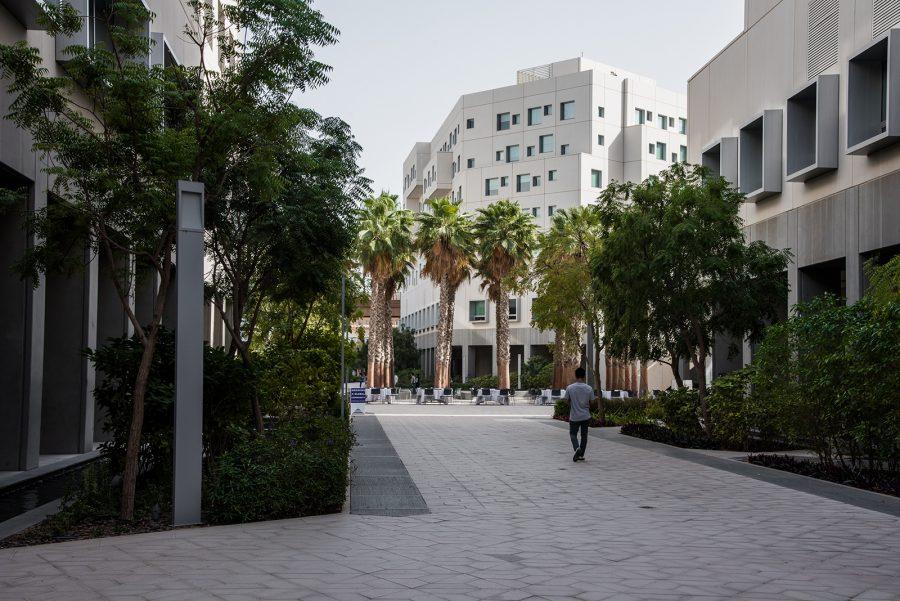 A student walks through the NYU Abu Dhabi Campus. NYU spokesperson John Beckman recently made a statement regarding the campus, which has been at the center of controversy during its decade of existence. (Photo by Sam Klein)

“Our years of successfully operating comprehensive liberal arts research university campuses outside the US have demonstrated the reverse of what the critics claim: that day in and day out, our students and faculty can carry on a full and unfettered academic program without concern,” Beckman said.

Since former President of NYU John Sexton first announced the creation of the Abu Dhabi campus in 2007, the university has mainly released statements in response to specific controversies on a case-by-case basis. The recent comment by Beckman is one of the first to express the university’s reasoning and philosophy in regards to NYUAD since Sexton.

“In the 21st century, higher education confronts two choices: engagement with the world, or disengagement,” the statement reads. “NYU has made a choice: we’re going to engage the world. We have made a choice to educate students and conduct research in countries that have customs and laws different from those in the US, where NYU was founded nearly 200 years ago.”

Beckman’s statement continued to discuss the university’s mission to provide a liberal arts education in countries with different laws and cultures, and also addressed the experiences of Social and Cultural Analysis Professor Andrew Ross, who was denied entry to the United Arab Emirates in 2015 after openly criticizing labor conditions in the country.

The statement suggests that NYU was not aware of Ross’ plans to travel, and so his subsequent denial is not representative of NYUAD. Ross says the reason he did not alert NYU channels was because his research was on a sensitive topic.

“They were very much aware of what they were doing in denying entry to an NYU professor,” Ross said. “If you’re doing research that involves sensitive areas, and in the UAE, labor research is one of those, then your duty is to protect your subjects. So, I wouldn’t be letting any authorities know that I was coming to interview workers in Abu Dhabi.”

While teaching in Abu Dhabi, NYUAD Professor Lauren Minsky had books for her course seized at customs during the 2017-2018 academic year. She claims that the director of NYUAD’s bookstore told her the books were censored. After administrative intervention, the books were finally released. The university’s statement also mentioned this experience but did not consider it a case of censorship at NYUAD, citing the fact that Minsky did eventually receive her books.

Minsky expressed that she felt the university’s statement created “a sort of them and us,” painting those who may criticize NYUAD as being against the concept of a college in a country with different societal values. However, the professor said she supports the aims of the university but has criticisms regarding some of its practices.

“I thought it was an interesting twist because I worked there for eight years, and I’m not against the liberal arts in the UAE,” Minsky said. “What I am against is an institution that’s operating a campus with a regime that has developed since the Arab Spring in 2011, an expansive and extremely paranoid state security services, which really operates at its own discretion.”

Recently, NYUAD has come under increasing scrutiny after the arrest of Durham University doctoral student Matthew Hedges, who was then sentenced to life imprisonment on spying charges. After Hedges’ arrest, 224 faculty members signed a petition urging NYU President Andrew Hamilton to condemn Hedges’ arrest. The UAE pardoned Hedges shortly after his sentencing, but faculty members were still concerned over academic freedom at NYUAD and held a forum in December to discuss these concerns.

Along with Ross’ denied entry to the UAE in 2015, Professors Mohamad Bazzi and Arang Keshavarzian have also been barred entry into the country in 2017. Bazzi and Keshavarzian have attributed their denials to their religious affiliations and research. Eventually, the Arthur L. Carter Journalism Institute severed ties with NYUAD in light of these entry denials.

Bazzi believes that NYUAD and academic freedom at the campus will continue to face more scrutiny as the UAE “becomes more repressive.”

“[The statement is] an attempt to respond to this increasing criticism, especially more frequent criticism from NYU faculty and faculty from the world-at-large over the Matthew Hedges case,” Bazzi said.

A version of this article appeared in the Monday, Jan. 28, 2019, print edition. Email Meghna Maharishi at [email protected]