NYU spoke out against a resolution less than a week after it was passed by student government and before it reached the University Senate. 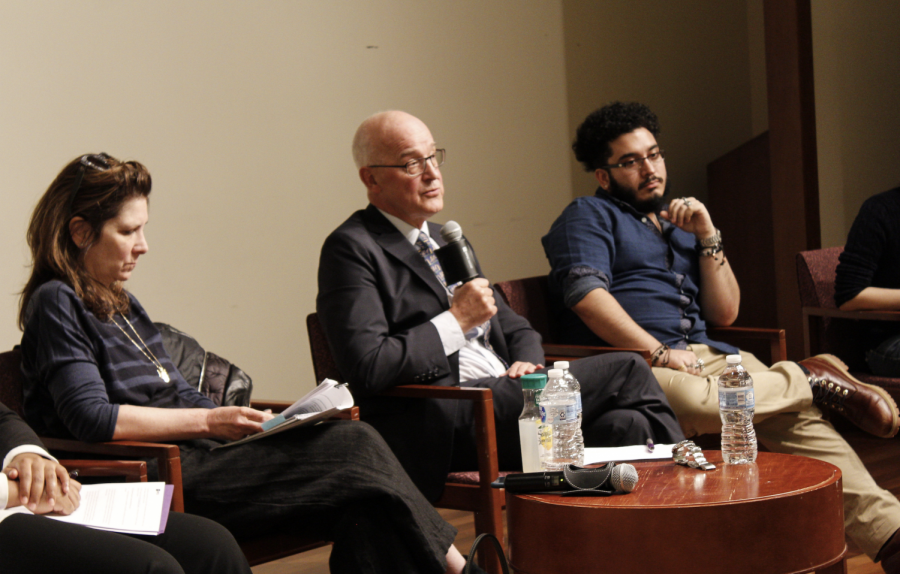 At a public town hall in April, NYU President Andrew Hamilton denounced the Boycott, Divestment and Sanctions movement as against the principles of academic freedom.

Thirty-two votes in favor were needed for the “Resolution on the Human Rights of Palestinians” to make it out of the student government assembly; on Dec. 6, it received 35 and passed. Now it’s headed to the University Senate, but a statement released by NYU on Wednesday that preemptively opposed the resolution makes it is unclear if it will even make it to the floor.

“[The resolution] is at odds with the Trustees’ well understood position that the endowment should not be used for making political statements,” the statement reads. “The University will not move forward with these measures.”

At a town hall in April, NYU President Andrew Hamilton denounced the Boycott, Divestment and Sanctions movement which is associated with the resolution that senators said seeks to use the Israeli-Palestinian conflict as a “case study” of human rights violations. Hamilton said this was due to his belief that boycotts are against the principles of academic freedom.

This may make NYU’s stance unsurprising, but the university does not often publicly oppose a student government resolution before it reaches the University Senate.

Senators-at-Large Rose Asaf and Bayan Abubakr and Alternate Senator-at-Large Leen Dweik worked together on the resolution that would have NYU divest from three companies associated with the Israeli military, which they feel is complicit in human rights violations against Palestinians. It would also institute a “socially responsible” investment policy like the one Yale University has had since 1972 or that Georgetown’s Board of Directors approved in 2017.

NYU opposed the bill on the basis that it is a boycott of Israel — a sentiment senators have pushed back on — and that it “would be a challenging proposal to enact.”

Dweik specified that it is a divestment bill, not a boycott bill, and that the difficulty of enacting the bill should not influence whether or not it is passed.

“[Administrators] don’t care what our money goes to, they just want more of it,” Dweik wrote in a message to WSN. “It’s a disgusting and shameful practice to turn a blind eye to injustice and throw your hands up and say, ‘Oh but changing policy will be hard to do!’”

Prior to the announcement, Asaf said that she felt it would be hard to get the bill to a vote in the University Senate, foreshadowing the university’s disapproval.

“The executive committee for University Senate is the body that will decide whether or not it gets on the agenda, and that will be an uphill battle itself,” Asaf said.

CAS first-year Asma Bawla, who attended the student government meeting where the resolution was passed and supports the bill, said she felt upset over the university’s statement.

“Ever since I’ve started at NYU I [realized] that this school cares more about the money than its students and it’s not afraid to show it,” Bawla wrote in a message to WSN. “By doing this they’re creating a very thick wall between the students and the people who control their tuition money.”

LS first-year Abby Hofstetter was also at the meeting, in opposition to the bill. Hofstetter told WSN that she felt the statement by the university did not seem to be a condemnation of BDS or support of Israel.

She said that, due to the differing reasons for Hamilton opposing BDS and this recent statement, she felt the administration was being dishonest about its reasons for its opposition.

“As a Jewish Zionist, I’m happy that NYU isn’t supporting BDS, but as an NYU student, I’m much more concerned that the administration isn’t being honest with its student body,” Hofstetter wrote in a message to WSN.