The Incarceration to Education Coalition ended their 155-hour long occupation in Bobst and Kimmel after NYU agreed to meet some of the organization’s demands, but NYU said “the University cannot make pledges that bind its actions in future years.” 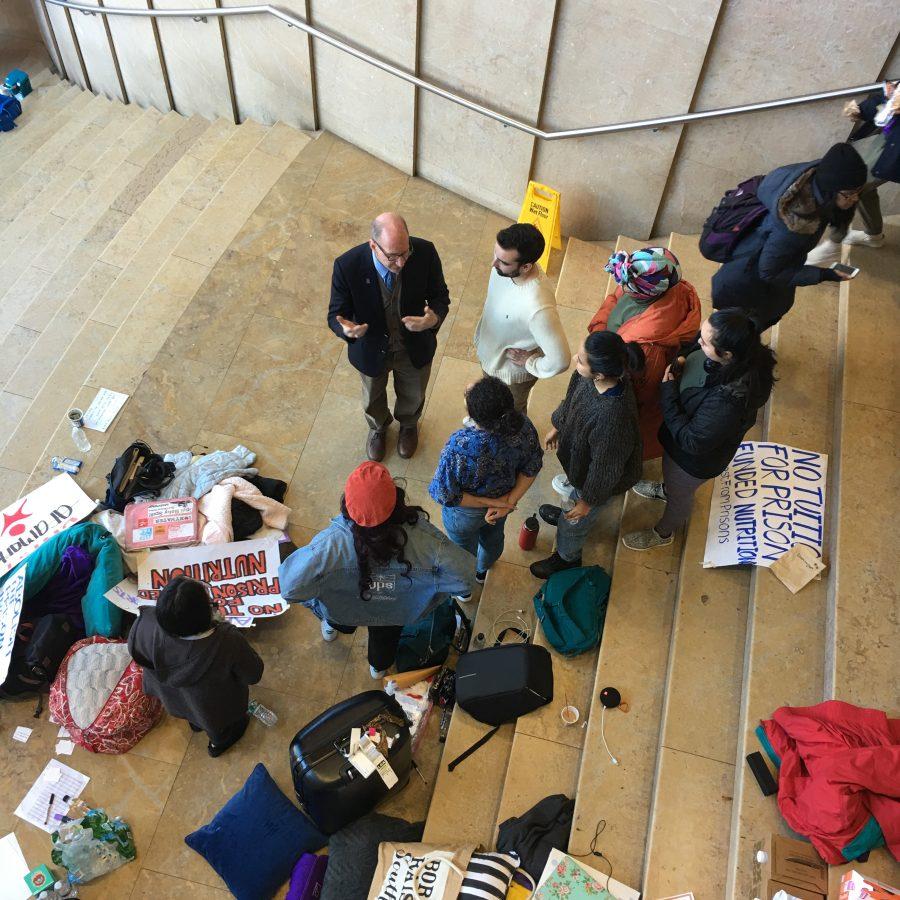 NYU has agreed to meet some of the Incarceration to Education Coalition’s demands after the organization ended their 155-hour long occupation in the lobby of the Elmer Holmes Bobst Library and the main staircase of the Kimmel Center for University Life.

The IEC occupied Bobst and Kimmel for nearly a week to urge the university to divest from food service providers that contribute to the prison industry. The IEC’s demands included a written guarantee from the university to shift to self-operating their dining services and the creation of a new committee that will monitor NYU’s transition to becoming an independent food service provider.

Protestors ratcheted up the intensity of their occupation on Friday morning by chanting phrases like “How do you spell racist? N-Y-U,” at tour groups coming through Kimmel. The university agreed to meet some of the IEC’s demands on Saturday night on the condition that the IEC vacated Kimmel, however NYU did not guarantee that they will transition to self-operating their dining services in the future.

While the university has agreed to a few of the IEC’s demands, Senior Vice President for Student Affairs Marc Wais said that the demands will not impact the current course of the bidding process.

“The current [bidding process] will continue and end with the awarding of a contract and that the University cannot make pledges that bind its actions in future years,” Wais wrote.

NYU agreed to support dining employees and to create a working group in the University Senate which will focus on how the university addresses mass incarceration, but university operations such as dining are not part of this committee. The Student Government Assembly will also select another student member – preferably an IEC representative – for the panel that will hear Aramark’s and Compass Group’s presentations in the bidding process on Dec. 14.

During March and April, NYU Divest and the Student Labor Action Movement used similar tactics, protesting the absence of student representation on the Board of Trustees, the administration’s lack of transparency and the university’s investment in fossil fuels. SLAM’s occupation prompted the university to threaten disciplinary action, and their protest ended after 36 hours. The IEC’s most recent occupation is one of the longest occupations in NYU’s history.

In a press release sent out on Sunday, the IEC said that it was “thrilled” with the outcome of the occupation, but lamented that the university threatened the organization with disciplinary action.

“Our occupation was yet another example of how NYU hypocritically claims to support student activists but privately uses intimidation tactics to suppress their peaceful protests,” the IEC wrote in their press release.

The IEC hopes that the new committees will eventually allow the university to divest from any food service provider or other companies that have ties to the prison industry.

“We are optimistic about the impact that these committees will have in our fight for ethical dining services,” the IEC wrote. “They will give us an opportunity to prove the feasibility of never contracting with a third-party corporation again.”