The 2018 Mexican Oscar entry is Alfonso Cuarón’s first film since winning an Oscar for directing “Gravity.” 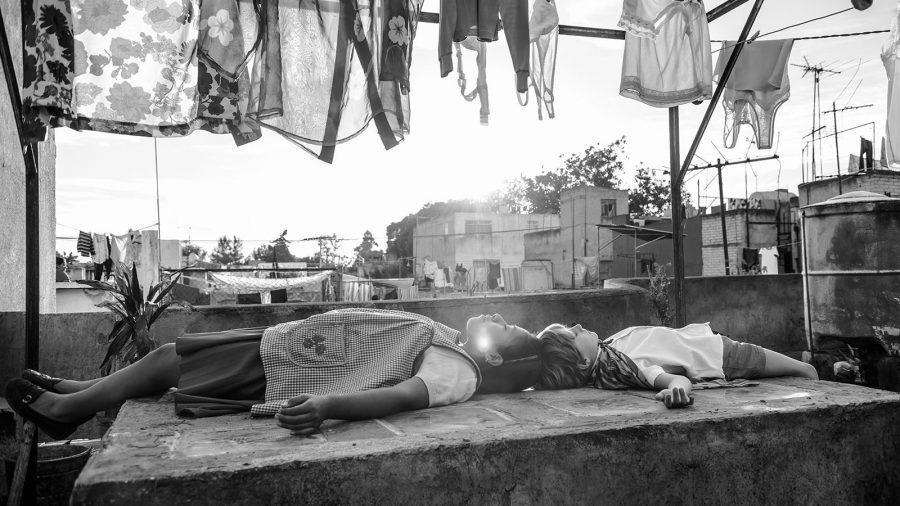 Yalitza Aparicio and Marco Graf in a scene from "Roma." (Courtesy of Netflix)

“I like being dead,” utters housekeeper Cleo (Yalitza Aparicio) in one of her few lines, while laying on the roof next to Pepe (Marco Graf), a child of the family she works for.

The camera rises and a sweeping pan reveals the roofs of surrounding houses, all of them with housekeepers like Cleo washing and drying clothes, just as she was before Pepe came.

Cleo works for Sofia (Marina de Tavira), who is forced to inhabit a two-faced life, putting on the performance of a happy, stable mother for her four children while quietly deteriorating due to the neglect from her workaholic husband, Antonio (Fernando Grediaga). Tavira gives the most heart wrenching performance in the entire film, far surpassing Cleo as the most interesting character.

Antonio leaves on a work trip in the beginning — shortly after returning from another — and Sofia goes to hug him goodbye while they stand next to his car. They smile as they embrace but when Antonio tries to pull away Sofia suddenly tightens her grasp, quietly begging him not to leave. Antonio pays no attention to her or their strained marriage. Sofia returns to the house and snaps at Cleo for not cleaning up after the dog, and later profusely apologizes. She failed in her act. Sofia is often on the verge of a breakdown, occasionally letting out her grievances at her family in short bursts — once even hitting her children — but it only takes a split second for her to get back into her faithful mother role. After all, she can only count on her family and Cleo to save her from completely losing her mind.

Director Alfonso Cuarón conveys how Cleo’s daily frustrations are shared by many, and yet all these hard working women have no choice but to keep pushing forth with their lives despite everything that’s thrown at them. This is an enduring image, one that makes Cleo’s words all the more heartbreaking: if dead, she would be at peace rather than having to face the endless burdens on her shoulders.

“Roma,” the latest film from streaming giant Netflix, is a black-and-white, semi-autobiographical Mexican drama based on Cuarón’s upbringing — vastly different from his most recent Oscar winning film, the sci-fi blockbuster “Gravity.” In the vein of “The 400 Blows,” Cuarón has made a film so personal and specific that the work inversely becomes a universal story on family and the hardships of being a mother. Alongside directing, he also wrote, shot, produced and co-edited the film.

While the film’s themes are relatable to any viewer, the way in which Cuarón tells the story may not be. “Roma” is a film that has to grow on its audience. It opens with credits playing over a tight shot of soapy water washing over a diamond pattern in a garage. After a few minutes, the camera pans up to reveal the mostly silent Cleo. This singular shot prepares the viewer for the patience they will need to have throughout the rest of the film. It takes a while before arriving at an incident — Cleo getting pregnant — and the filmmaker uses several long takes to showcase mundane things like Cleo cleaning up the house, her home life or the bustling streets of Mexico. His deliberation is initially frustrating and seemingly aimless. The last hour was definitely the most engaging of the entire film, but that is only because Cuarón had patiently dived into each of the characters and the world of the film at its start, making the viewer as familiar with them as possible for when the real drama kicks in.

Cuarón is known for making heavy films, but his filmography suggests that he is really a humanist filmmaker in the way he approaches the errors and potential of both the individual and society at large. “Children of Men” is mostly drowned in pessimism but ultimately offers a symbol of hope amid overwhelming futility: a baby girl is born after two decades of human infertility and cynical protagonist Theo has redeemed himself by getting the mother and daughter to a peaceful refugee group. “Harry Potter and the Prisoner of Azkaban” is noted for a darker tonal shift in the overall franchise, but ends with the boy wizard gaining self confidence and mastering the Patronus charm while realizing that he still has a real family left in his godfather Sirius Black. The ending scene of “Gravity” finds Dr. Ryan Stone swimming to shore after crash landing from space and taking her first steps back on land, which is symbolic of the biological evolution of humans as well as religious rebirth.

Humanity’s resiliance against adversity persists in all of his films. “Roma” is no different, but the way it tackles this theme feels more depressing because of how unrealistic it is. A scene of Cleo in a hospital during an earthquake shows debris falling in the baby room, which she treats with striking normalcy as if to accept that this is the way the world is: unbearable and ripping apart. This feeling is reinforced later when Cuarón recreates the 1971 Corpus Christi massacre in a scene where Cleo and Teresa (Verónica García), Sofia’s mother, are in a furniture store. During the frenzy, Cleo’s water breaks and her rush to give birth is juxtaposed — and nearly hindered — with the chaotic loss of life around her. Despite all these harsh circumstances, Cuarón still builds towards an ending that proclaims that life can improve, mainly through the support that the family and Cleo are constantly providing one another to survive each day.

The Netflix film is having a short theatrical run, but it is likely many people will later watch it on their laptop — that would be a grave mistake. “Roma” stands as one of the most visually beautiful films of the year, surpassing even the grand visuals of a colorful blockbuster like “Avengers: Infinity War.” It needs to be seen in the theater. Cuarón achieves an interesting memory-like effect with several sweeping pans and epic landscape shots that look like they came straight out of a dream, but the film’s black-and-white aesthetic is really used to signify an unbiased reflection of his past.

“Roma” is a challenging watch but ultimately a necessary one. Cuarón explores the daily sociopolitics of early 1970s Mexico, breathing energy into a past era of the country. But beneath this gloomy period piece exterior is a personal narrative that provides a message on how family members can save one another in times of strife.

A version of this article appeared in the Monday, Dec. 3 print edition. Email Guru Ramanathan at [email protected]