Protestors gathered on a rainy Monday afternoon in Long Island City to protest the impending arrival of Amazon's new headquarters. 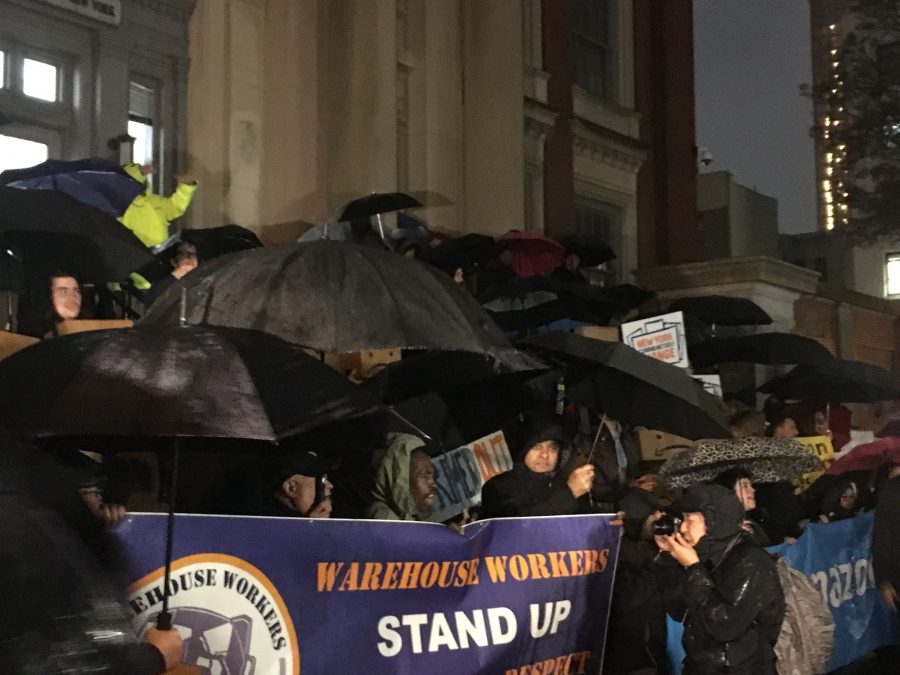 Protestors assemble outside the steps of the Long Island City Courthouse. (Staff Photo by Victor Porcelli)

Around 80 people shielded themselves from the pouring rain, huddling under umbrellas or inside raincoats as they yelled “G-T-F-O, Amazon has got to go,” to the rhythm of the raindrops on the steps of Queens County Court House on Monday.

On Nov. 13, Amazon announced that it had reached a deal with New York City: for $2.8 billion in subsidies, Amazon promised 25,000 new jobs for residents of Long Island City, Queens, where the e-commerce giant will build its second headquarters. However, at Monday’s protest in the chosen city hosted by 19 different activist organizations, both resident and non-resident attendees voiced concerns about the deal. Namely, that none of the new jobs would go to them, and that the construction would instead result in further gentrification of their city.

Antonio Alarcon, 24, has lived in Jackson Heights, Queens for his whole life. When asked if he was concerned about the effect of wealthier, whiter residents moving into Long Island City in response to the deal, Alarcon said the gentrification process began well before Amazon’s impending residence.

“If we think about Long Island City a couple of years ago, this was a particular community of colors, now we see a lot of white folks moving into the neighborhood,” Alarcon said. “So imagine bringing Amazon into this community.”

Many protestors brought up the topic of gentrification. Bob Roberts, 58, came to the protest to support residents he felt would soon fall victim to a phenomenon that he himself experienced. Roberts recently inherited his mother’s rent-controlled apartment in the Upper West Side. In 2007, Columbia University expanded into the area. Roberts says that the university made promises to preserve local housing and business that they did not fulfill, citing the fact that his mother’s apartment now houses many Columbia students.

“What went from a very mixed, interesting neighborhood is just becoming the academic zone, and what’s happening here is going to be so much worse,” Roberts said.

Brent O’Leary, who is running for City Council in District 26, which includes Long Island City, was also at the protest. Criticizing the amount of subsidies given by the New York government, he said that as Long Island City is the fastest growing neighborhoods in the United States, subsidies should not be necessary to attract businesses.

Rather than help citizens of the city, O’Leary believes this will displace them.