Wrestling Tallies a Win Against a Ranked Opponent 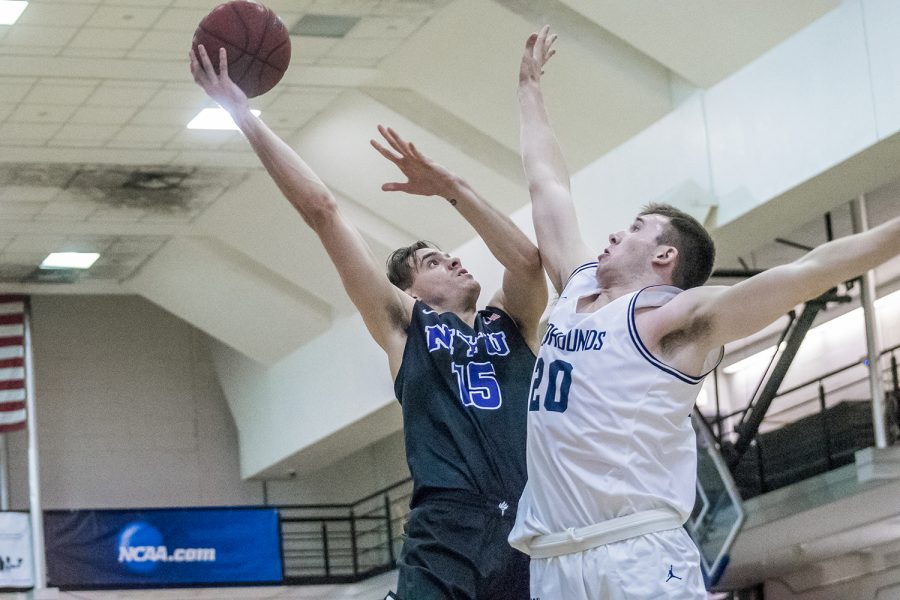 Oscar Argemi Gonzalez takes a layup in a game against John Jay on Nov. 20, which NYU won. (Photo by Sam Klein)

After winning the 165-pound title at the New York State Collegiate Championships on Nov. 18, Tandon sophomore James Murdoch was named UAA Athlete of the Week. Murdoch became the second-ever NYU wrestler to win his weight class at this event and now has a 13-2 record for the season. This is Murdoch’s first honor of his career.

Following the New York competition, NYU wrestling held its own against 24th-ranked Stevens Institute of Technology on Nov. 25, winning seven of 10 bouts en route to a 28-13 win.

This was NYU’s first win against Stevens since the 2014-15 season.

The wrestling team with travel to Maine for the Ted Reese Invitational hosted by the University of Southern Maine on Dec. 1.

Men’s basketball went 1-1 this week after defeating John Jay College and falling to The College of Staten Island.

The Violets demonstrated their defensive prowess in their game against John Jay College on Nov. 20, winning 63-51. John Jay was held to just 29.8 percent from the field and 18.2 percent from three-point range thanks to NYU’s stifling defense. Fifty-one points is the lowest amount of points the Violets have allowed in two years since they defeated John Jay by a similar score of 63-50. The Violets also played efficient offense, shooting 61.5 percent from deep. SPS junior Jimmy Martinelli led the way offensively for the Violets with a game-high 17 points, 13 rebounds and five three-pointers. SPS senior Jule Brown pitched in 16 points and three three-pointers.

On Nov. 21 the men lost their defensive spark they had in their last game, losing to The College of Staten Island by a score of 87-67. NYU never led in the contest.

NYU started the game with 16 turnovers in just the first half, leading to a 39-27 deficit. The team could not pull much closer in the second half, mustering up as much as a 9-3 run, which was later trampled by a 9-0 run by Staten Island. NYU ended the game with 26 turnovers and a less-than-efficient 36.4 percent from the field and 14.3 percent from deep. CAS junior Dom Cristiano posted a double-double in the loss with 15 points and 11 rebounds; Stern first-year Cade Hoppe and CAS junior Cameron Moore added 10 points each.

The Violets return to action when they host Rosemont College on Nov. 27.

Nursing first-year and diver Cole Vertin was named UAA Athlete of the Week on Nov. 19 after winning both the one-meter and three-meter dives at the United States Merchant Marine Academy on Nov. 17. He scored 308.50 and 310.25, respectively. This is the third time Vertin has been honored this season

A version of this article appeared in the Monday, Nov. 26 print edition. Email Zach Han at [email protected]