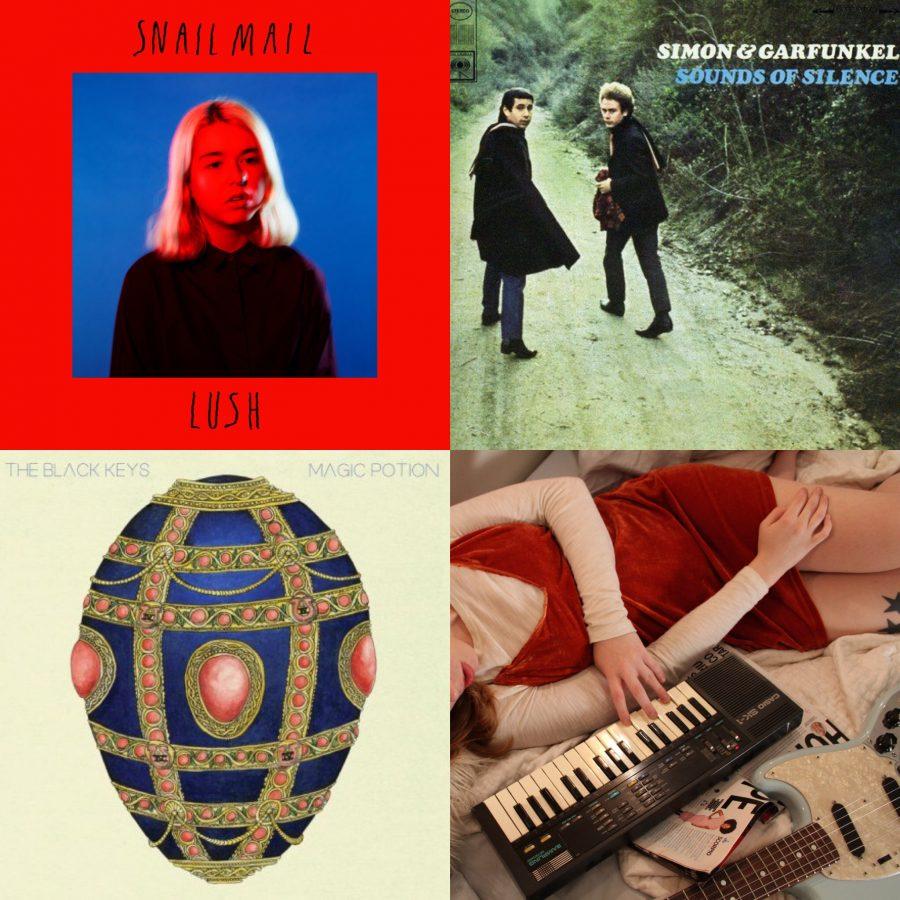 From left to right, clockwise: “Lush” by Snail Mail, “Sounds of Silence” by Simon and Garfunkel, “Magic Potion” by The Black Keys and “Collection” by Soccer Mommy. (via spotify.com)

I am not going to lie: I fell in love with the album “Lush” when I discovered Snail Mail early last spring. I was lucky enough to witness the 19-year-old Lindsey Jordan in a South Congress Street dive bar as part of the South by Southwest Festival in Austin, TX. The voice behind the moderately successful indie hits “Thinning” and “Static Buzz,” Jordan’s gargantuan talent is finally backed by more robust studio production in the debut studio album. Songs like “Stick” were given a makeover and nine new tracks like “Full Control” create of a perfume of nostalgia, reminiscent of anyone’s happy place, which for me, is New York City in the fall. “Lush” is truly the soundtrack of fall. Songs like “Golden Dream” and “Deep Sea” represent Jordan’s growth since her raspy alto days on YouTube and Band Camp. The band’s lyrics –– “the morning bleeds into the golden dream” –– provide a compelling accompaniment for early morning strolls through Washington Square Park as the sun pierces the rapidly changing sycamore trees that throughout the park. For stagnant morning walks braving early winter wind chill, songs like “Pristine” and “Heat Wave” add some bounce to your chilly, lethargic step. Lyrics like “And we can be anything, even apart and out of everything, it doesn’t have to be this hard, I could be anyone” are pure poetry and elevate a vanilla Monday to the level of a leave encrusted Autumn strolls as seen in classic New York films like “When Harry Meets Sally.”

“Sounds of Silence” by Simon & Garfunkel

Autumn is a bittersweet season; it’s the transition from the warm summer rays to the cool winter winds. There’s no better album to bask in this passage than the folk stylings of Simon & Garfunkel’s “Sounds of Silence.” Many of the duo’s melodies are imbued with melancholy, but perhaps none more so than the record’s first track, “The Sound of Silence.” The poignant lyrics lament the loss of human interaction in the face of superficiality. They sing, “People talking without speaking, people hearing without listening” to signify that in this artificial and commercial world, people have forgotten how to communicate with one another. The words were written more than 50 years ago, but hold true now more than ever. In “Leaves That Are Green,” the track most explicitly reminiscent of fall, Simon & Garfunkel present the inevitable passing of time. Green leaves will turn brown, another year of life will pass, love will fade away and everything will eventually end. It’s a simple tune, but the weight of its lyrics pervades your body to the bone. The final song “I Am a Rock” is a fitting close to an album that wades through sadness. The speaker has “built walls” around himself, shielding himself from the pain that feelings bring. The duo sings “I won’t disturb the slumber of feelings that have died, if I never loved I never would have cried.” Simon & Garfunkel’s “Sounds of Silence” is a harrowing album no matter the season, but listening to it as you walk down streets riddled with fallen leaves as the brisk autumn air stings your cheeks elevates the profound state of sadness.

About the same time that I break out the scarves and heavy coats from the back of my closet, a telltale sign of the upcoming brisk weather, I break out my folk-rock Spotify playlists. From Bon Iver to Bob Dylan to Ben Howard, there is something so very autumnal about an acoustic guitar and a powerful voice. Yet, the album that immediately screams both fall and nostalgia would be Fleet Foxes’ second release, 2011’s “Helplessness Blues.” With songs like the vibrant opener “Montezuma” and the fiddle-infused “Bedouin Dress, the album is chock-full of iridescent harmonies and lavish guitar instrumentation. However, my favorite track on the record remains the penultimate “Blue-Spotted Tail,” an acoustic track with tranquil vocals that blend together into a beautifully simplistic ballad. As vocalist Robin Pecknold hums through the track, followed by gentle guitar strums, the listener is painted a vibrant picture of hanging lights in the night sky. It is the intricate themes of nature and subdued vocals, paired with earthy instrument textures and organic harmonies, that make this the ideal fall record. As you exchange your T-shirts for sweaters and swimsuits for parkas, I urge you to listen to this Fleet Foxes masterpiece. Fall might just not be complete without it.

“Elephant” by The White Stripes

From that opening riff on “Seven Nation Army,” The White Stripes’ “Elephant” album is a heart-pumping, foot-stomping, fist pumping rock and indie fusion. As temperatures drop, the winds pick up and leaves turn color, autumn often signifies an era of new beginnings for me, particularly because it coincides with the start of a new school year. While a fresh start is exciting, I need some good music to help me tackle new challenges. An album I often turn to is “Elephant.” All the songs on this album are great to jam to but also give me the unique feeling of getting ready to conquer the world. It makes me feel confident and comfortable and also ready to pick up an electric guitar and rock out. “The Air Near My Fingers” and “Hardest Button to Button” are especially evergreen rock classics that are extremely underrated in the White Stripes oeuvre.

This mini-album by Nashville native and Steinhardt dropout Soccer Mommy is exactly what I need as the days get shorter and the temperature falls. Its lo-fi aesthetic and lowkey vibes — a simple, gentle guitar line, her voice soft and tinged ever so slightly with sadness — are perfect for the season. As the leaves start to change hues and drop, the sweaters come out of storage and we sip warm cider, our thoughts shift inward, hopefully, to new beginnings. The singer-songwriter (Sophie Allison) is known for her work that’s sensitive, tender, and thoughtful, but there’s also an an emotional complexity there, an edge that makes room for bitterness and anger alongside the sadness. It’s perfect for this time of year, one that can be lonely and dark, but also cozy and comforting.

“Magic Potion” by The Black Keys

Music by The Black Keys is the type that makes you want to throw on a vintage leather jacket, chain smoke hand-rolls and maybe buy a motorcycle. And whether or not I’ve ever actually achieved that fall aesthetic, it’s definitely how I picture myself when I walk through the streets in November jamming to “Magic Potion.” Throughout the album, the guitar is bluesy, jolting and injects enough energy into the tracks to shake you out of your sleep-deprived stupor on the way to class in the morning. Dan Auerbach’s crooning but fuzzed-out vocals give the album a haunting edge of winter feel, especially on softer tracks like “The Flame,” an anxious, slow  song underscored by heartbreak. “Magic Potion” stays true to distinctive Black Keys sounds with a more somber finish perfect for the weather.