At a fireside chat with administrators, Hamilton cited a large number of students already in Los Angeles as why Los Angeles makes sense to be NYU's next site. 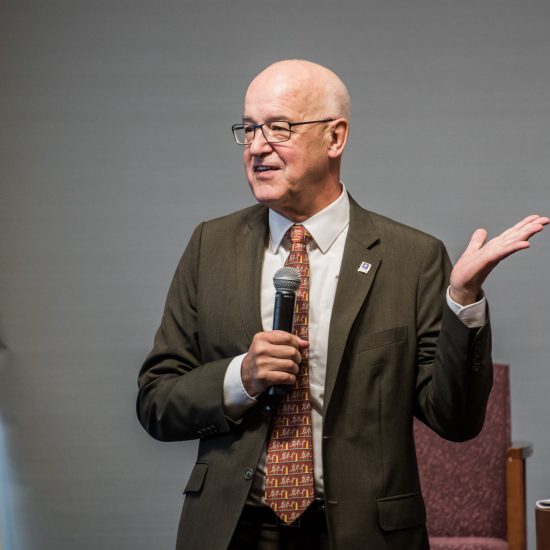 NYU President Andrew Hamilton speaks at a Fireside Chat event in Kimmel on Nov. 6, 2018. Hamilton announced at the event that NYU will open a new campus in Los Angeles.

NYU President Andrew Hamilton revealed on Tuesday that Los Angeles could be the university’s newest study away site. The announcement was made to a group of around 200 administrators at an Administrative Management Council Fireside Chat.

University spokesman John Beckman confirmed that NYU would be opening a campus in Los Angeles and said the university will work to provide opportunities to students across schools interested in music, film, media and more.

“What we’re thinking of is building on that base by having a program that will combine classroom work with an internship experience,” Beckman said in an email. “It would be focused on those students who want to pursue careers in all things media, including both the creative community and the business community.”

Beckman also said that NYU is in the process of looking at real estate to house academics, alumni activity and student residences.

Hamilton cited a significant number of students in Tisch School of the Arts, Steinhardt School of Culture, Education and Human Development and Gallatin School of Individualized Studies already studying in Los Angeles. Those pursuing careers in the film or entertainment industries often intern and work in the city.

Tisch already offers Los Angeles as a study away site during the summer and January term, and the city hosts a mentor program for recent graduates.

In addition, Hamilton said the Stern School of Business is also interested “in being part of an increased emphasis on Los Angeles.” Stern has their own stake in Los Angeles’ industries, with a new Fashion and Luxury master’s degree and involvement in the business and management side of music and film. This is why Hamilton feels an increased presence in Los Angeles would be beneficial to a variety of students.

Hamilton said academics play the greatest role in the university’s decisions on where to open new sites, clarifying that neither students’ preference nor the appeal of the location should be deciding factors. With many students’ academic pursuits leading them to Los Angeles, Hamilton suggested the city would be a place to watch.

Update, Nov. 6: Updated to include a statement and information from John Beckman, who confirmed NYU will be opening a Los Angeles campus. The headline and the article have been modified to reflect the new information.