From ‘Front Runner’ to Political Pariah

Politics and celebrity collide in “The Front Runner,” which tells the story of 1988 presidential hopeful Gary Hart, whose campaign was derailed by rumors of an extramarital affair. 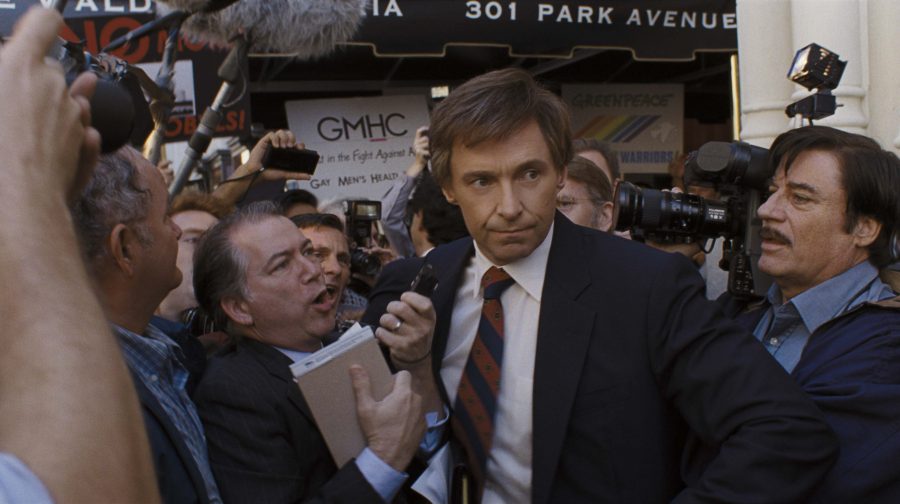 Hugh Jackman as Gary Hart in "The Front Runner." (Courtesy of Sony Pictures)

In 1987, “Fatal Attraction” was the second-highest grossing film. “Miami Vice,” the show that popularized cocaine cowboys and pastel-colored suits, was rounding out its third season. Sex, glamour and crime saturated the culture of the ’80s, and the political stage was no exception.

“The Front Runner,” based on Matt Bai’s book “All the Truth Is Out,” chronicles the meteoric downfall of Senator Gary Hart’s 1988 presidential campaign following rumors of an extramarital affair with then-model-and-actress Donna Rice. As Bai’s book suggests, the media traded legitimacy for fleeting entertainment. This wasn’t a reflection of what politicians and journalists were willing to do but a reflection of the public and what it had allowed to happen. “The Front Runner” successfully shows how three pivotal weeks in 1987 reshaped both political media and journalism forever.

With the opening scene, director Jason Reitman catapults the audience into the chaos of 1980s political campaigns. The year is 1984, and Hart’s hopes of cinching the Democratic nomination have been uprooted by Walter Mondale. Outside his hotel, the streets are flooded with reporters, news anchors and cameras flashing. Reitman sets this landscape of a media jungle that “The Front Runner” uses to expound Hart’s inevitable downfall.

At the core of the film is Hugh Jackman’s impeccably nuanced portrayal of Hart. Hart is a complex man whose private tendencies could prevent an actor from sinking his teeth into the nucleus of the character. But Jackman deftly balances the integrity of a man who remained steadfast in his beliefs, even as his world collapsed around him. J.K. Simmons plays Bill Dixon, Hart’s campaign manager, delivering an exceptional performance as the voice of reason to Hart’s unrealistic expectations of privacy. Among a heavily male-driven cast, Vera Farmiga shines as Lee, Hart’s wife, who is unfairly dragged into the frenzied whirlwind.

Political films can easily tread into propaganda, but “The Front Runner” tells a story that urges viewers to think for themselves. It’s as if the film presents the concrete facts of the Hart scandal, refraining from commending or vilifying anyone, and the audience is the jury, tasked to come to their own conclusion. The film does not devote all of its attention to Hart; instead, it moves between perspectives of journalists and political aides to understand the pandemonium that erupted in the wake of scandal. There are no heroes that emerge, only different people trying to find their stance on a transformative event in politics of which no one could make sense.

The film depicts a battle of conflicting morals among journalists. Tom Fiedler, a reporter for the Miami Herald, was the one who broke the story of Hart’s affair and who famously confronted Hart in an alleyway behind his Washington, D.C. townhouse. A.J. Parker, a young, timid reporter for the Washington Post, serves as a character who grapples with a sudden penchant for salacious reporting by the most respected media outlets. “The Front Runner” relates Fiedler and Parker as opposing sides of a moral quandary: should politicians’ private lives be shielded from the public and exempt from pageantry, or is the responsibility of reporters to call into question a leader’s character, even if it means succumbing to sensationalism?

In his speech withdrawing from the 1988 presidential race, Hart paraphrased former president Thomas Jefferson: “I tremble for my country when I think we may, in fact, get the kind of leaders we deserve.” That’s the final thought “The Front Runner” leaves us to consider. The unraveling of Hart’s campaign in three short weeks paints a striking portrait of what politics would become: a gossip and celebrity-driven platform where the deceitful who know how to play the game succeed and the honest wither away.

“The Front Runner” opens in New York theaters on Nov. 6.

A version of this article appeared in the Monday, Nov. 6 print edition. Email Daniella Nichinson at [email protected]