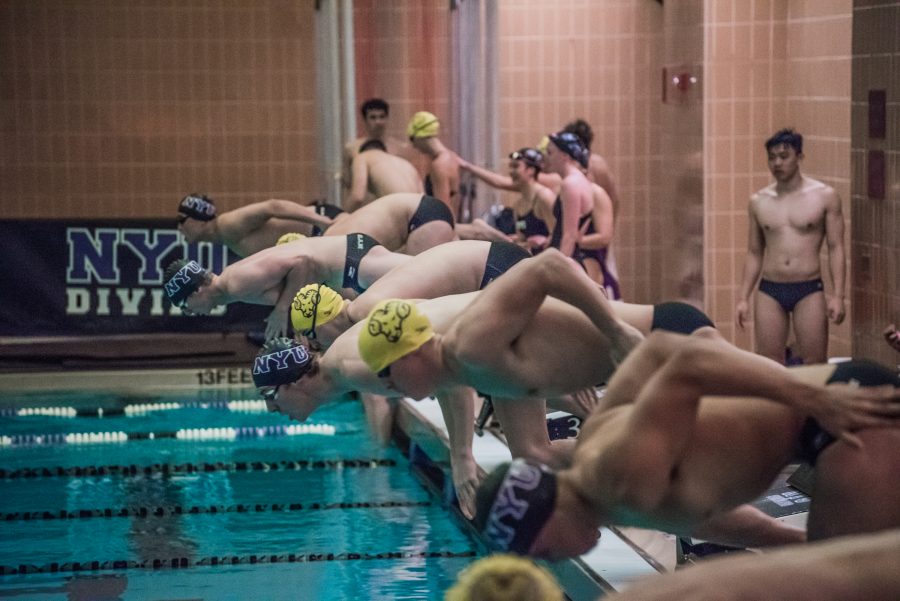 NYU Swimmers during a meet on Oct. 6. First-year swimmer Graham Chatoor set conference and NYU records to earn national berths in the 1650-yard and 500-yard freestyle. (Photo by Sam Klein)

NYU Swimming and Diving stayed close to home when it added 2016 NYU graduate Krista Traub to its coaching staff in early October. Traub, who spent four years on the swimming and diving team from 2012 to 2016, was hired to be the new assistant coach under Head Coach Trevor Miele.

Traub has a rich history in competitive swimming, first participating at her local YMCA during elementary school and then later in high school and college. Swimming runs in her family, so this was only natural.

“My parents met when they were on the swim team in college,” Traub said. “They went to the University of Maine. And both my brothers swam as well, so we’re just one big swimming family.”

A big reason why Traub decided to come back to NYU to coach the team was because of his experience as a student athlete.

“[My time swimming at NYU] was definitely challenging but extremely rewarding,” Traub said. “I think I gained a lot, not just from swimming and the structure of swimming and how it challenges you, but also just from the team itself and the friendships and relationships I made on the team. I think the people made it worth it, and I obviously love the sport.”

Traub was a big part of the culture that the swimming and diving team cultivated, as she served as team captain in the last two years of her collegiate career.

“I think being captain for two years was the most rewarding [accolade] out of all of it,” Traub said. “Just being a part of a team that was growing and developing and being able to lead that and help [Head Coach] Trevor Miele bring out the team he wants.”

Traub also served as an athletics transition coach and on the Student-Athlete Advisory Committee during her tenure at NYU. As an athletics transition coach, she was paired with new student athletes to help them adjust to life as a student athlete at NYU. While serving on the SAAC, she worked on events such as promoting sports events and volunteering with athletes from other sports.

She had a noticeable presence on the team as a swimmer, on-campus as a student athlete and a strong relationship with Head Coach Miele. It comes as no surprise that Miele reached out to her inquiring about the assistant coach position, considering she even hinted at the possibility while she was on the team.

“I had a good relationship with Trevor since day one that I got to NYU, and we stayed in contact since I graduated,” Traub said. “It was something I used to joke about with him when I was a swimmer on the team, but when the opportunity arose, he reached out to me and I accepted.”

The opportunity to return to familiar grounds as a coach, especially at the request of her former head coach, is something that she finds difficult to express through words. Needless to say, she is excited for the season.

“I’m really excited about it and really proud that he asked me to come back,” Traub said. “I guess it just means a lot and to be able to contribute again to the team but in a different way. I’m excited to see how it works out.”

Since joining the coaching staff, she has set goals for herself to leave her mark on this team as a coach, like she did when she was a student.

“For myself, I want to see if I can at least help one person,” Traub said. “I think that would be considered a success in and of itself.”

She hopes to emphasize team relationships and an enjoyable experience first because a good foundation in those aspects will result in a successful season.

“Trevor doesn’t make it easy,” Traub said. “The practices are definitely hard, and the practice schedule is really rigorous and it can beat you up. If the majority of them can enjoy swimming and enjoy going to practice and look forward to it and competing, then I think that is a success.”

Outside of the pool, Traub graduated from the College of Nursing and is currently working as a fertility nurse at the Reproductive Medicine Associates of New York LLC. It seems like helping others is just second nature to her.

The swimming and diving team has been off to strong start to its season. The men are currently undefeated at 3-0, while the women bounced back from a loss in their opener to a record of 2-1. Traub and the team look to continue this momentum through the rest of the season.

A version of this article appeared in the Monday, Nov. 5 print edition. Email Zach Han at [email protected]