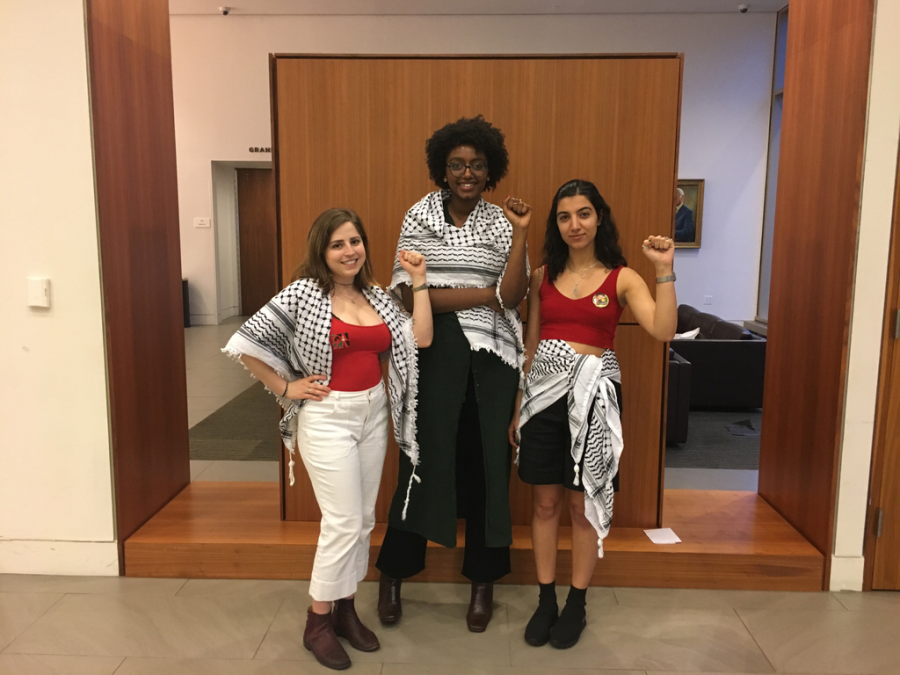 The “Resolution on the Human Rights of Palestinians,” which would have NYU divest from companies associated with the mistreatment of Palestinians, was presented to the Student Senators Council on Thursday. The resolution will be voted on by way of secret ballot, a security precaution critics of the resolution worry will impede accountability on the part of the senators.

“As a Palestinian student, I believe the university has a responsibility to me and to other Palestinians, to stop investing in companies that directly contribute to human rights abuses of Palestinians,” Dweik said.

General Electric supplies engines to Israel’s navy and air force, as well as a gas firing engine to NYU Langone. Caterpillar Inc. provides the Israeli military bulldozers — one of which was used to kill American activist Rachel Corrie — as well as diesel engine generators for NYU’s Central Power Plant. Lockheed Martin sells fighter jets to the Israeli military, used in an invasion of Lebanon in 2006 that killed civilians — they are also listed as partners of Tandon School of Engineering and the NYU Center for Urban Space and Progress.

Six students for and against will speak about the resolution in another meeting on Dec. 6, which will also be open to all NYU students, after which the council will put it to a vote by secret ballot. According to Asaf, Abubakr and Dweik, this is intended to keep senators safe. All three of the students said they had been threatened in the past for publicly supporting Palestinian rights.

Students for Justice in Palestine is targeted by a Facebook group called SJP Uncovered, which posts inflammatory comments about members of the club, saying things like NYU student government “perpetuates hate against Jews by entertaining an anti-Semitic BDS resolution.” Additionally, the site Canary Mission has a profile of her saying she has “spread hatred of Israel” and lists her social media handles.

Dweik said she had been similarly targeted, and that is why the vote would be by secret ballot.

“It’s very much an everyday thing where, as we exist as people advocating for Palestinian human rights, we are getting targeted specifically with our names and our faces,” Dweik said. “We wanted to make sure that the people in this room were not subjected to the same thing that we are, because we’ve signed up for this but they haven’t.”

Some students fear a secret ballot will make it impossible to hold student senators accountable for their votes. President of NYU Realize Israel Adela Cojab mentioned that, with senators representing students who may have different opinions on the issue, it is important to know how they vote.

Additionally, Cojab said a lack of public accountability on the resolution and meetings has caused her to lose trust in the body. She mentioned the fact that, although the 23 school senators are elected, 14 senators-at-large are appointed by school senators from the previous year. This self-selection of the body, combined with aforementioned issues, are reasons she feels that the student body needs ways to be held accountable.

“We always talk that the Board of Trustees at NYU makes decisions behind closed doors and there’s no transparency and there’s no accountability … and that is very much what I feel with this body,” Cojab said.

Among those on student government, only Asaf has the Jewish community listed among their constituencies. This has left pro-Israel Jewish students, who are often at odds with Asaf, feeling that they are not represented. Several of these students attended the meeting concerning the resolution which they see as having a significant impact on them.

“We don’t currently have a voice on student government, and this resolution greatly affects our community,” President of NYU TorchPAC Rebecca Stern said. “We came today to show that we care, and we want to be a part of this.”

Another community the resolution may affect is Tandon students. Three of the corporations this resolution demands NYU cut ties with have good relationships with NYU Tandon. Not investing in them could hurt the job prospects of Tandon students who often find themselves employed by these companies according to School Senator for Tandon Joel Urena.

“Our relationship with these corporations are made worse by these steps,” Urena said.

Later, he clarified that Asaf had reached out to him about working with Tandon students when enacting this resolution if it were to pass, which he appreciated. Although he is not an engineering student himself, he recognizes that his constituency certainly includes them.

“I am a bit dismayed that it’s exclusively engineering companies,” Urena said.

Asaf said the university’s relationships with corporations that harm Palestinians, engineering-focused or not, is hypocritical to the school’s values.

“We will not stand for our institution, in the guise of being a progressive, liberal university, actively funding war and human rights violations,” Asaf said.