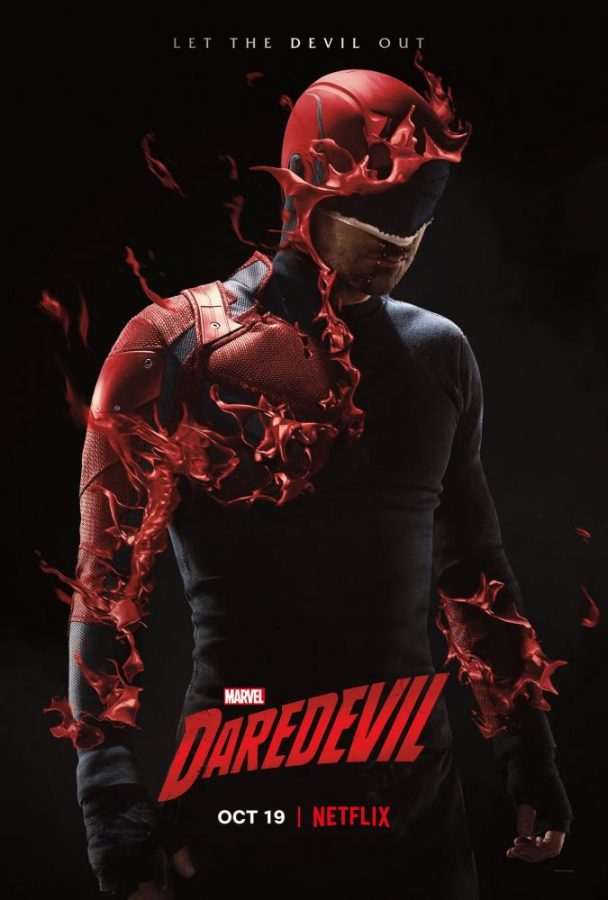 A promotional poster for the third season of "Daredevil." (via Facebook.com)

Heavy shadows, high-contrast lighting, conflicting moral compasses, violent mysteries and an unrelenting examination of law and order: all elements of a film noir well done. They are also aspects that make up the Netflix series “Daredevil,” which just released its third season. Coming two years after the second season and a year after “The Defenders” crossover series, “Daredevil” returns to elements that made their first season excellent, while adding new touches which elevated the third season to one of the best seasons of any TV show produced this year.

While recovering from the fight at Midland Circle in “The Defenders,” former lawyer and vigilante Matthew Murdock (Charlie Cox) learns that the criminal Wilson Fisk (Vincent D’Onofrio) is taken out of prison by the FBI in exchange for intel on various crime syndicates. The Devil of Hell’s Kitchen gets desperate to stop Fisk at any cost, even if it compromises his morals, but the criminal mastermind remains one step ahead.

What makes “Daredevil” so special and unique from other superhero stories is its ability to lean heavily into its comic book source material in a realistic way. Murdock is a blind man whose senses have been enhanced by radioactive waste and dresses up to beat bad guys to a pulp. But he has also grown up an orphan, and enters this season believing the justice system is crippled — while also constantly dealing with personal religious quandaries and mental instability. While his missions are over the top, his motivations are grounded in a mature, emotional foundation that consistently make him a compelling hero to follow. Because of his newfound detachment to his Catholic upbringing, the show is able to explore a messy moral territory that was not completely realized in the previous season and also tell a compelling backstory.

Murdock is constantly tested and outmatched by Fisk, whose return to the show as the main antagonist is the season’s biggest highlight. D’Onofrio once again gives an award-worthy performance, stealing every scene he is in with his subtle, menacing impressions and deep, haunting voice. Although physically intimidating, Fisk is often seen using his intelligence to outmatch his opponents. His strength is a secondary tool to him, and often he is able to manipulate his way into achieving the objective at hand.

As the season progresses, Fisk’s plan is slowly peeled back, showing the character is stronger by virtue of his conniving nature. His intricate plotting is one of the show’s strengths, the overall story being the show’s most complex and successful arc. It puts the vigilante back on the gritty streets of Hell’s Kitchen, but Fisk’s plan to take over the city raises the stakes in a manner that is realistic and a solid improvement over some of his more generic plans in the first season.

Two of his biggest power plays come in the form of manipulating the two new additions to the cast, FBI agents Rahul “Ray” Nadeem (Jay Ali) and Benjamin “Dex” Poindexter (Wilson Bethel). Next to D’Onofrio, Ali gives the best performance, stealing every scene he is during the last few episodes. In a way, he is the most real out of any of the characters, facing financial debt, wanting to prove himself as a father to his son and frustrated as a below-average federal agent. Nadeem has one of the best arc’s, desperately giving in to his pride and corrupting himself to improve his image and help his family. But towards the end of the scene he becomes starkly quiet, and Ali uses small expressions to indicate the intense guilt that pierce Nadeem’s psyche.

Character work is a big reason why this season really excels. There are so many sequences, short and long, that are beautifully visualized and structured to building out the characters, such as a chilling black and white vignette into the backstory of Dex. Or, several scenes where Matt imagines talking to Fisk, but the camera is directly focused on Matt while Fisk is in the background and blurred out — a consistently clever illustration of how the villain has infiltrated the hero’s damaged mind.

The show is not without its phenomenal action, aided partly by innovative cinematography. The sequences are thrilling but are used to build character, not just entertain and spread blood everywhere. Notably, an 11-minute one take in a prison and a critical fight inside a newsroom were some of the show’s defining scenes, used as a way to test Murdock’s physical and mental prowess as Daredevil while also indirectly exercising Fisk’s immense power.

The third season of “Daredevil” boasts a number of positives that frankly could take up an entire essay. Aside from a few minor nitpicks, the season is a perfect action noir that features phenomenal performances and stunning cinematography. Because it puts as much emphasis on character and story as it does visuals and action, it is able to fire on all cylinders and sets a new standard for superhero television.