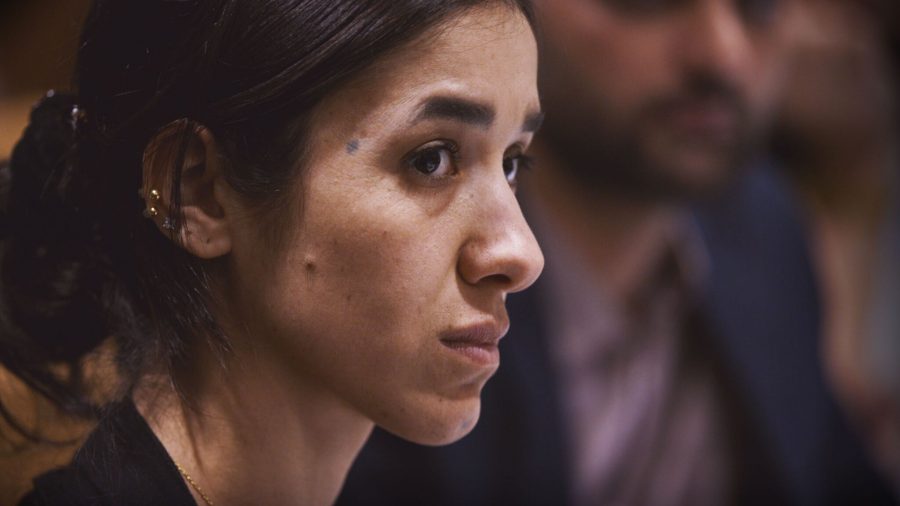 Nadia Murad, Yazidi refugee and activist, subject of documentary "On Her Shoulders." (Courtesy of Oscilloscope Laboratories)

The Yazidis are an ethnoreligious group of about a half a million from Iraq’s Kurdistan region. In 2014, the Yazidis were subject to a genocide at the hands of the Islamic State. Now spread across the globe — many in refugee camps — their communal bond remains unbroken as they rally around a leader, Nadia Murad. Only 23 years old, Nadia is a survivor of sexual slavery at the hands of ISIS. The documentary feature “On Her Shoulders” follows her campaigns through Europe and North America for recognition and justice for the Yazidi people. Undaunted by its tragic backdrop, the film is as courageous as its main subject.

Director Alexandria Bombach tells this decidedly personal story despite its lofty implications. More than anything, the film is about a woman who finds herself shouldering, as the title suggests, the struggle of her people. Through her remarkable courage, Murad becomes a leader in the strive for justice for the Yazidis. Insisting throughout that she is “just a girl from a village,” Murad, separated from her loved ones, finds a family in her allies. Chief among them is Murad Ismael, executive director of Yazda, a Yazidi nonprofit based in the United States. An interpreter, manager, guardian and friend all rolled into one, he and Murad are like siblings, leaning onto each other when the journey becomes too daunting.

What happened to Murad is horrific, but the details of her suffering, which she recounts time and again in interviews, are never actually heard in the course of the film. Set against a pitch-black set, Murad admits that she would rather the world know her as an “excellent seamstress… athlete… [or] farmer.” But she courageously assumes the role of representing her people. She does so on behalf of those still suffering as she did, at home and in refugee camps.

Murad marches with her countrymen in Berlin, attends a Yazidi gathering in Ontario and visits her people in refugee camps throughout Greece, continuously petitioning these governments and the United Nations to hear their voices. When she waivers under the pressure, a man reminds her of something important.

“They’re all getting their strength from you. If you cry, they’ll cry too.” She presses on.

Alexandria Bombach balances the importance of Murad’s mission and the unique way in which she embodies it. Bombach frequently uses footage of protests and testimonies to illustrate the human consequences of the atrocities Murad is speaking out against. Simultaneously, she depicts the true leadership of this soft-spoken and unassuming young woman. Murad sits among her people and absorbs their words, listening as a young boy sings about abandoning his home. She brings them joy through the hope she inspires, holding those who are distressed as they weep, and whispering words of encouragement to the strong.

“On Her Shoulders” draws to a close with much of young Nadia Murad and her people’s story left unwritten. Though ISIS has been driven from their home, it is still severely damaged. The Yazidis are in diaspora, and their advocates are only capable of so much. The content of this documentary is proof enough, Nadia Murad is a symbol of unity and peace, to a very fractured people.