What the Cruff Is up With Stuffed Ice Cream? 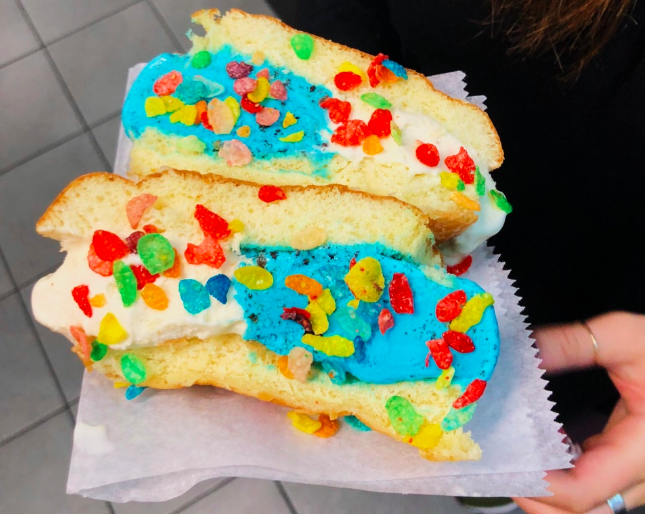 One particularly chilly night in the East Village, I decided to brave the cold for the only delicacy that would draw me out from the warmth of my apartment. On the way to retrieve my beloved Dumpling Man dumplings, I stumbled upon a familiar storefront: Stuffed Ice Cream. It seemed like a place I had seen on Instagram and upon closer inspection, my suspicions were confirmed. The signs on the glass door boasted reviews from Buzzfeed, Time Out New York, Food Network and NBC, just to name a few. Despite the near icy temperature, I just knew I had to try the frozen treat everyone was raving about.

Stuffed Ice Cream sells ice cream in every form you could imagine, like ice cream scoop bouquets and ice cream cake. But the most Instagram-worthy option — and the reason this store is different from other bougie ice cream parlors is the cruff, scoops of ice cream sandwiched between two glazed doughnuts. Confused by the name? Stay confused because there’s no clear explanation. Whether or not it has meaning, it sounds like every dessert lover’s dream.

The menu is also differentiated by unique flavors like “Thai Kwon Dough,” consisting of Thai Tea and Vietnamese Coffee-flavored ice cream topped with almonds and condensed milk, and “Cereal Killer,” a combination of Fruity Pebbles and Cinnamon Toast Crunch ice cream topped with Captain Crunch cereal and caramel sauce. Arguably, the most Instagram-friendly flavor of them all is cheekily named “Unicorn Poop.” This deliciously named cruff is made with white chocolate lavender and Thai tea ice cream, garnished with Fruity Pebbles cereal and condensed milk. There is also a build-your-own option, where you can choose from a variety of ice cream flavors and toppings to create a personalized sweet treat.

I opted to build my own cruff, sacrificing several hard earned cents for another flavor of ice cream. I chose the salted caramel pretzel and cookie monster flavors, budget be damned, and topped it with Fruity Pebbles. Looks-wise, the rainbow-accented blue and white beauty did not disappoint — fulfilling my mission to create the most Instagram-worthy dessert.

However colorful my cruff was, I found that the flavor fell flat. While the salted caramel pretzel was delicious, it was nothing mind-blowing, and I wished it had more pretzel pieces mixed in to liven up the texture. The bright blue cookie monster was basically just vanilla ice cream with food dye and a few measly crumbs of chocolate cookie mixed in. Again, I wished for more crunch in my bite.

The donut that held the cruff together was also subpar. I found it to have an almost mealy texture, and the glaze on the donut was barely noticeable. It felt like I was eating ice cream sandwiched between two brioche rolls which, albeit tasty, was not providing the sugar rush I so desperately craved.

My cruff was only redeemed by the Fruity Pebbles, primarily because they can do no wrong, but it also added a lovely burst of artificial fruit flavor and a much-needed crunch.

Although my dessert did look beautiful on my Instagram story, I had to ask myself: Was the $7.25 really worth it? Should I really have to spend extra just for a second flavor of ice cream? What is technology doing to us? Who am I? What is life? While I don’t have the answers to all these questions, I do know that I was thoroughly underwhelmed by Stuffed Ice Cream’s cruff.