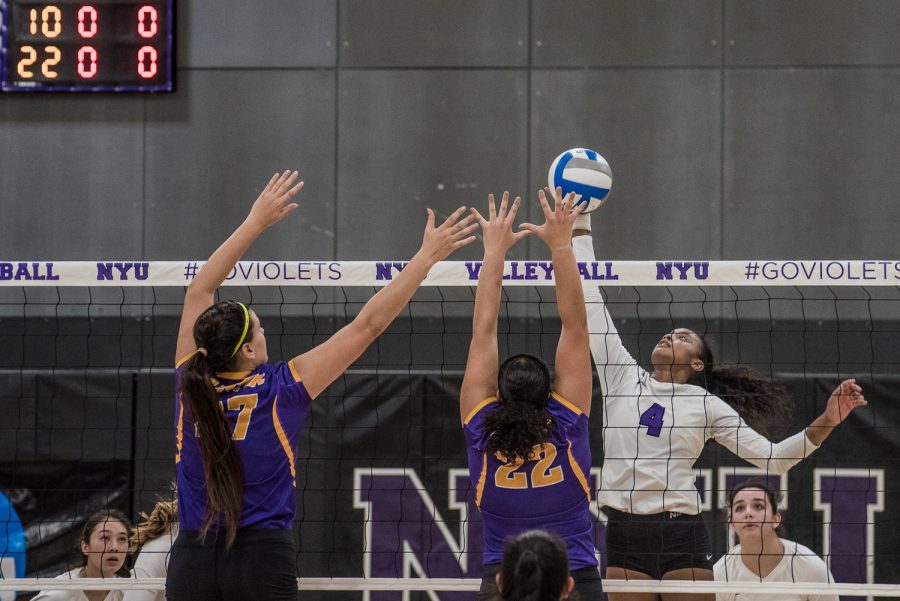 Nazzarine Waldon spikes the ball in a home win over Hunter College on the team’s Senior Day. (Photo by Sam Klein)

Men’s and Women’s
Swimming and Diving

Both NYU men’s and women’s swimming and diving came out of Palladium Athletic Facility with wins against Rowan University on Oct. 20.

The men’s team posted a final score of 177-115, dominating the butterfly, freestyle and diving events en route to its second straight win. Stern sophomore Elan Oumarov showed out in the 100-yard and 200-yard butterfly, winning first in both events with times of 51.35 and 1:53.58, respectively. SPS senior Nianzhong Liu took first in two events as well, posting a time of 20.98 in the 50-yard freestyle and 46.09 in the 100-yard freestyle. In diving, Nursing first-year Cole Vertin won the three-meter dive with a score of 340.81 and Steinhardt junior Nick Lemieux took second place in the one-meter dive with a score of 293.70.

With the men’s team off to a 2-0 season start and the women’s team bouncing back to even with a 1-1 record, NYU swimming looks strong going into the NYU Fall Invitational on Nov. 2-3 during which it will host the Stevens Institute of Technology.

After the disappointing double overtime loss to UAA rival Rochester last week, men’s soccer got back in the win column blanking Lehman College 2-0.

The game appeared to close as both teams remained scoreless at halftime. The defense by CAS senior Grant Engel and Stern sophomore Andrew Ashley was flawless as the NYU goalies combined for four saves overall and allowed no goals. It wasn’t until the second half when NYU’s offense ignited. Stern sophomore Santiago Huertas scored the first goal of the game off of an assist from CAS senior Alexander Dano. Stern first-year and NYU’s leading goal scorer Oliver Kleban doubled the Violets’ score when he hit the back of the net off of an assist from CAS senior Robert Shellow. The Violets outshot Lehman College 17-4 for the game.

This win was NYU’s 11th of the season, with the possibility of reaching 12 during an upcoming visit to UAA rival University of Chicago on Oct. 26.

Women’s soccer avoided a loss this week after drawing with Farmingdale State College on Oct. 18 when both teams failed to find the back of the net.

Despite Farmingdale outshooting NYU 14-10 overall and NYU having more shots on goal (6-5), Stern sophomore and goalkeeper Meghan Marhan and Farmingdale’s goalkeeper stood as staunch defenders, barring any shots from passing by. This marked Marhan’s fifth shutout of the season

The Violets will play in their final non-conference game of the regular season against John Jay College on Oct. 22.

Both men’s and women’s cross country showed up to compete at the Monmouth Tune-Up on Oct. 19 as they both secured second-place finishes among four teams each.

The men took on the 5K course and were only five points out of first place, finishing with 30 points behind Bloomfield College’s first-place winning 25 points. A total of five runners scored for NYU. CAS junior Yuji Cusick led the Violets with a time of 16:15.40, good enough for a third-place finish out of 50 runners. Stern first-year Chris Shirazi finished right behind Cusick in fourth place, finishing with a time of 16:24.15. Rounding out the rest of NYU scorers were Stern first-year Brandon Mayo in eighth place, Stern senior Soham Kamat in 11th place and Stern first-year Brett Asay in 12th place).

The women finished in second place with 45 total points on the 3K course, only behind Monmouth University, which had 15 total points. Gallatin first-year Valentina House led the way for NYU with a seventh-place finish (11:45.87) out of a pool of 39 runners. The rest of NYU’s runners finished consecutively behind House: Steinhardt first-year Kate Gallagher, Stern first-year Ashley Storino, CAS sophomore Noela Franco, CAS junior Isabella Steains and CAS first-year Athina Zodl.

Both NYU teams will return to action when they compete at the UAA Championship in Chicago on Oct. 28.

The women’s volleyball team finished with an even record of 1-1 this week when it was defeated in a close game with Montclair State University on Oct. 18 but ground out a victory against Hunter College on Oct. 20.

The first game against Montclair was a slugfest, as the Violets played a back-and-forth match, trading and even mirroring match victories. The game was tied at two matches apiece (25-23, 23-25, 25-18, 18-25) before the game-deciding fifth match. The Violets played their hearts out in the final match, even gaining a 13-11 lead late later on. However, they couldn’t muster up another point as Montclair scored four straight points to cement the victory in their favor. For the game, CAS sophomore Jacqueline Kupeli had a team-high 17 digs and CAS senior Daryl Mitchell totaled a team-high 26 assists.

The Violets defended home court against Hunter College as four seniors were honored in the final home game of their careers. NYU played its second five-set match of the week, but came out on the winning side (19-25, 25-23, 25-21, 23-25, 16-14). Late in the final set, the teams were tied 14-14 with only so many possessions left in the game. Tisch first-year Abby Ausmus put NYU up 15-14 with a kill and in the ensuing possession, CAS senior Nazzerine Waldon’s kill secured the victory. Waldon led the team with a team-high 13 kills and 17 digs. Mitchell led the team in assists with 25.

The regular season is set to wrap up when the Violets play a doubleheader at the New York Region Challenge on Oct. 26 against Fredonia College and Nazareth College.

After strong performances at the NYU Fall Invitational last weekend, Tisch sophomore Jessica Wu received Liberty League Performer of the Week and LS first-year Isabel Herrera received Rookie of the Week honors. Wu was NYU’s top finisher last weekend, finishing fourth out of 43 total golfers, while Herrera secured an eighth-place finish. This is the second time each of these players received these awards this season.

A version of this article appeared in the October 22 print edition. Email Zach Han at [email protected]