Some say you can't survive college in NYC without a fake — but is it true? 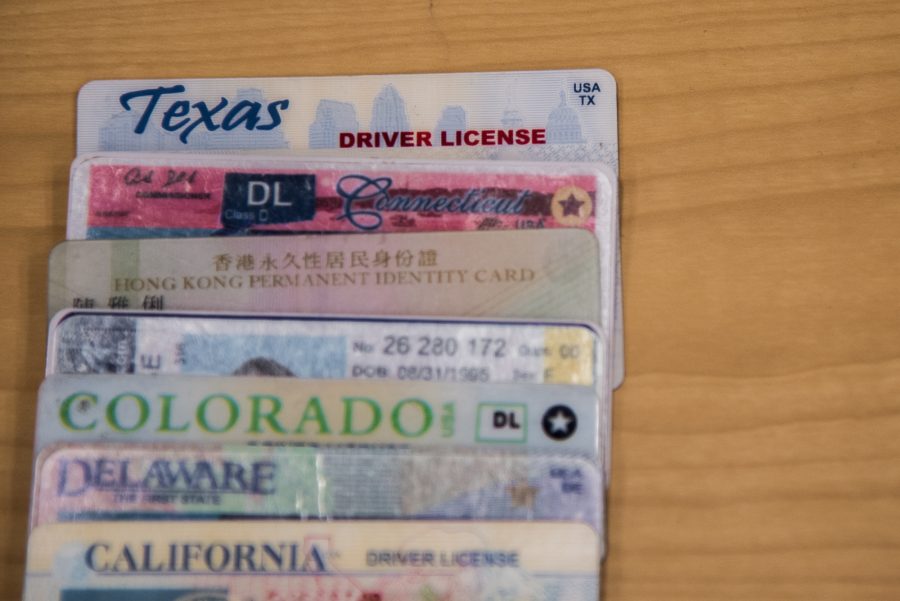 Some students elect to use fake IDs for nights out before they turn 21. (Photo by Sam Klein)

Fake IDs are a common asset among high school students and even more so amongst college students. However, in order to successfully reap the benefits of a fake, one must employ the correct strategies to obtain one.

Julia W. — a Gallatin junior — acquired her fake ID as a first-year student.

“I ordered it right before college. It was my mom’s idea. She thought it would make sense in New York,” Julia told WSN.

While most people associate fake IDs with the freedom to drink, their use extends far beyond the realm of alcohol. In New York especially, there are many concerts, clubs, comedy shows and other forms of entertainment that require proof of age to attend.

CAS sophomore Andrew S. — who wishes to withhold his last name due to the legal risk — uses his fake to get into clubs, but when it comes to alcohol, he asserts that a fake ID is too risky.

“Honestly, it’s better to get someone who’s legal who can buy it,” he said. “That’s what I like to do. I have friends who are, like, 21 and up. I’m not trying to get in trouble.”

Julia thinks the opposite, positing that a fake ID makes going out far easier. Her friend, unfortunately, did not make such an investment.

“He’ll come and hang out with us and drink with us at someone’s apartment, but then, he has to go home when we go out,” Julia said. “So, I think it’s easier to just get it. It’s worth the investment.”

When deciding to invest in a fake ID, there are are a number of things to keep in mind. One of the most important components is the state from which one allegedly hails.

“Bouncers will know the state you’re in and the states you’re around a lot better,” Julia said. “They would know New York or New Jersey or Rhode Island really well — and Connecticut. They would [also] know California really well. I’d try to get a random state but not too random.”

Julia chose to get one from the South, where’s she’s originally from. Pick somewhere random but not too random.

Andrew got his fake ID from Ohio after doing some research.

“I got the new Ohio license,” Andrew said. “We researched. [Ohio] just updated their license, and they update it, like, every x amount of years. So we were like: we want the newest one so it will last the longest.”

States are important, but selecting the perfect, nondescript homeland means nothing if your ID is of poor quality. Most students entrust the enrichment of their collegiate career to certain websites, such as ID God, which is the self-proclaimed #1 trusted fake ID website worldwide. There are several other options, however. In fact, ID God may not be the most economical option.

“Yeah, [a lot of people] get ripped off, like they’ll spend close to like $75 to $100 on two IDs, and then, they won’t work or they’ll be really bad quality and get turned down more,” Andrew said. “ID God is like not the best website, but a lot of people use that.”

He prefers idtop because of the better prices. Through idtop, two fake IDs cost only $55 However, prices vary by state.

“I got a really good price compared to all my other friends,” he said.

Are fake IDs worth the money and the risk? For many, the answer is a resounding ‘yes.’ As students of NYU, fake IDs may even be more pertinent to taking full advantage of the many opportunities the city has to offer.

“It’s necessary if you want to go out at NYU,” Andrew said. “You’re very limited if you don’t have one, unfortunately. And that shouldn’t be the case, but, it’s New York City.”

Fake IDs can indeed enrich one’s college experience — if done correctly. It is probably safest to get alcohol from someone who is at or above the legal drinking age; it is best to be smart when selecting states and quality is of the utmost importance. Perhaps it is also advisable to stick to one’s real name and birth date (not the year, obviously) to avoid the late-night, drunken confusion.