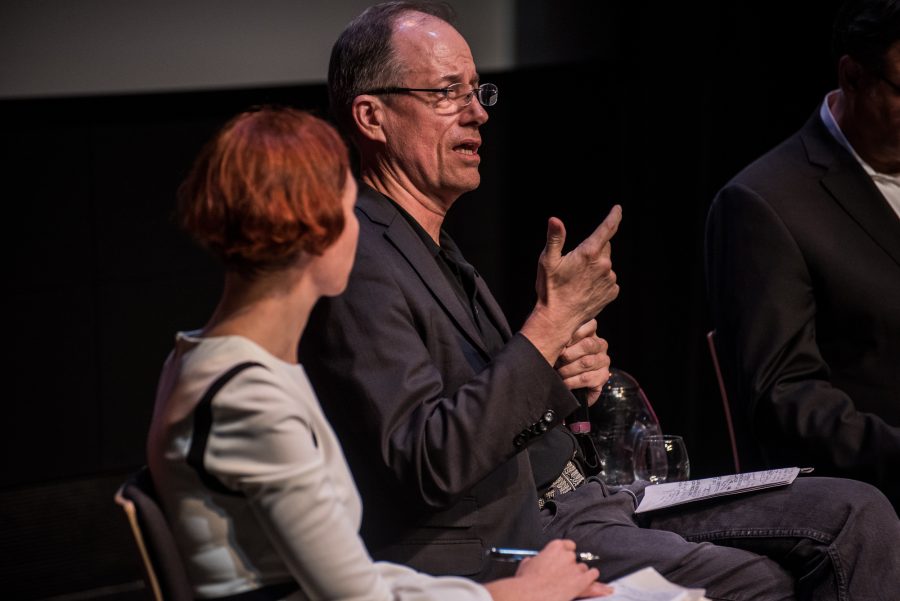 Thomas Drake, who was indicted under the Espionage Act for disclosing classified documents in 2010, speaks at a panel discussion about whistleblowing at Gallatin on Thursday. (Photo by Sam Klein)

Addressing one of the most controversial issues facing national security in the modern world, NYU held an event Thursday to discuss the merits and drawbacks of whistleblowing.

Former Central Intelligence Agency and National Security Agency officers spoke about the importance of understanding whistleblowing at a Gallatin School of Individualized Study event. The conversation centered around two panels of various whistleblowers, advocates and historians who discussed the history, evolution and impact of whistleblowing as well as its relationship to national security.

One of the panelists was former CIA Counterterrorism Officer John Kiriakou, who blew the whistle in 2007 on the CIA’s torture of suspected al-Qaeda operatives and was subsequently indicted under the Espionage Act of 1917.

“I was passed over for a promotion after expressing that I didn’t want anything to do with the torture program,” Kiriakou said. “You can’t possibly feel more alone on the day you are arrested.”

Another panelist was former NSA Senior Executive Thomas Drake, who exposed the United States government’s violations of the rights of citizens through secret mass surveillance after 9/11 and intelligence failures. He was indicted in 2010 by the Obama administration, also under the Espionage Act.

“When the FBI pulled up beside my home on [Nov. 20], 2007, I felt a lump in my throat,” Drake said. “They had what they called a ‘mole-hunter unit’ trained in tracking down spies to come after me. The government believed that what I had done was worse than what spies do and I was called an ‘enemy of the state,’ What does that say about our democracy?”

The speakers elaborated on the effect that their leaked information had on the United States public and the overall importance of whistleblowing.

“The most important impact [the leaked information] had was definitely the McCain-Feinstein Anti-Torture Amendment,” Kiriakou said. The amendment to the National Defense Authorization Act was signed into law in 2015 and offers measures to help deter torture. Preserving accountability, even if it does not result in legislation changes, was also an important factor in the officers’ decisions to leak information.

“If I had remained silent, I would be complicit in a crime against humanity,” Drake said. “The government went against the Fourth Amendment. You can’t just let them violate the law and have them get away with it.”

Drake, Kiriakou and other speakers also voiced their dislike for the Trump administration’s  disdain for journalists and others who shed a light on questionable practices in government.

“The government has no qualms about going after those who expose them because what they are doing is not in the public interest,” Drake said. “The Trump administration calling the press the ‘enemy of the people’ is chilling.”

Among the other speakers at the event were former President of the National Association of Criminal Defense Lawyers Barry Pollack and former Department of Justice National Security Counsel Brian Fleming.

“Whistleblowing is a dirty word in the Justice Department,” Fleming said. “We are heading toward more intrusions into the news media and journalism.”

For audience member Louisa Schloussen, listening in on the panel was eye-opening.

“I felt that the panels were very interesting and informative about the history and effects of whistleblowing and national security,” Schloussen said.

Though Kiriakou paid a heavy price for leaking information, he doesn’t regret uncovering the torture.

“It’s all worth it,” Kiriakou said. “As heavy as the price [of whistleblowing] is, we can’t stop. It’s one of the only ways to save our democracy.”