A recap of the NYU sports during the week of Oct 7. 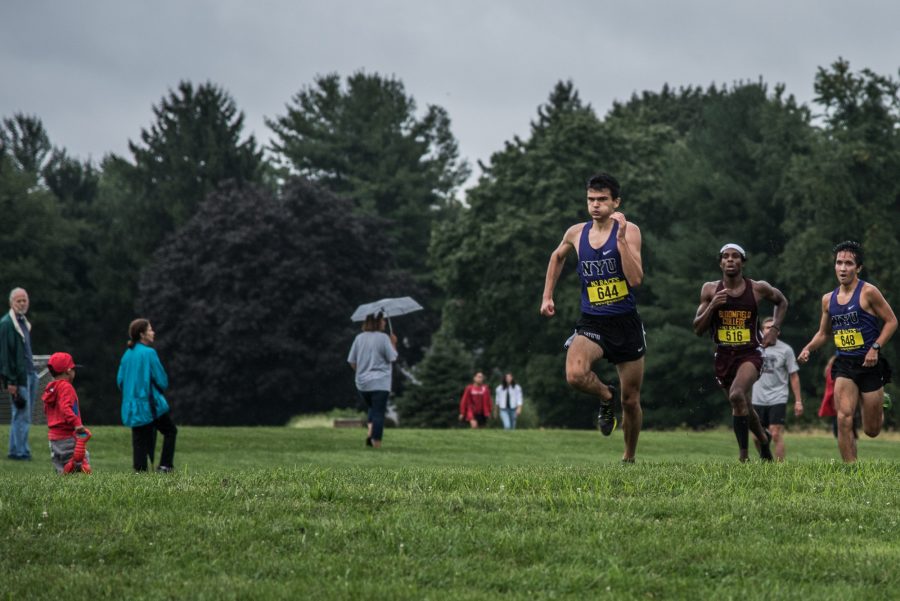 Men’s Soccer
Following a 3-0 shutout win over Case Western Reserve University, the men’s soccer team looked to start another win streak, hosting three straight games at Gaelic Park, its home field in the Bronx. Facing off against Sarah Lawrence University, the Violets dominated the entire game with five different players each scoring a goal; CAS senior goalkeeper Grant Engel earned a shutout in net, and the team cruised to a 5-0 victory.

Next, the Violets hosted Emory University under the lights on Friday night. Scoreless through the first 80 minutes, the game changed when sophomore forward Maxi Rodriguez scored the game-winning goal with under 10 minutes left, and another shutout from Engel propelled the Violets to a 1-0 win over their UAA opponent.

Aiming to extend their win streak to four, the Violets took on the University of Rochester Sunday at 11 a.m. Tied 0-0 at the end of regulation, the Violets suffered a tough 1-0 loss when they gave up the game’s only goal in double overtime. Sitting on a 10-3 record overall, the men’s soccer squad looks to bounce back as it squares up against Lehman College at home next Saturday afternoon.
Women’s Soccer
The NYU women’s soccer team looked to remain undefeated within the UAA this weekend, taking on Emory and Rochester on its home turf. Battling against Emory in a night game on Friday, the Violets found themselves down a goal with 10 minutes remaining in the first half. After being awarded a penalty shot, CAS senior Maddie Pena tied the game as the Violets’ strong defense led to a 1-1 tie.

Standing at 7-4-2, the Violets remain unbeaten in the UAA (3-0-1) and look to continue winning as they play at Farmingdale State College this Thursday.
Women’s Volleyball
The women’s volleyball team traveled to Pittsburgh, Pa. to play in two doubleheaders this past weekend, hosted by Carnegie Mellon University. Facing off against Case Western, the Violets lost 3-1 (17-25, 29-27, 14-25, 21-25) as first-year Gretchen Kincade led the Violets with 14 kills.

At 14-11, the women’s volleyball team will look for win number 15 as it plays at Montclair State University Thursday night.
Men’s Cross Country
The men’s cross country team participated in the Metropolitan Championship in Riverdale, N.Y. on Friday, a group of underclassmen led the Violets, who were the only Division III team competing. CAS sophomore Oliver Jacob placed highest among the Violets, coming in 52nd place after completing the five-mile course. Stern first-year Brandon Mayo and Tandon first-year Antonio Macabantad finished 56th and 57th place, respectively, as the Violets finished in ninth place out of 1 teams.

Competing in the Inter-Regional Border Battle on Saturday, the cross-country team had a strong performance, placing eighth out of 42 teams. The Violets were led by Tisch senior Ben Haderle, who placed 41st at 25:50. CAS junior Ben Karam finished five seconds later, and his 25:55 time earned him 50th place. In total, the Violets put up 283 points and return to action on Oct. 19th, when they will participate in the Monmouth Tune-Up in Colts Neck, N.J.
Women’s Cross Country
The women’s cross country team also participated in the Inter-Regional Border Battle on Saturday, hosted by Rowan University in Logan Township, N.J. The Violets put up 881 points and came in 30th place out of 39 teams. First-year Valentina House led the way for the Violets, placing 106th out of 347 runners in the 6K with a time of 22:39. First-year Kate Gallagher finished in 141st place with a time of 23:55.  The Violets look to continue to improve when they resume action at the Monmouth Tune-Up on Oct. 19.
Women’s Golf
The women’s golf team concluded their impressive fall season with a second-place finish at the NYU Fall Invitational in Bloomfield, N.J. this past weekend. Tisch junior Jessica Wu led the way for the Violets, coming in fourth place overall. SPS senior Patty Treevichapan finished right behind Wu with a two-day total of 157 strokes, as she tied for fifth place.

The women’s golf team returns to action on March 9, when it will compete in the UAA Championship in Palm Coast, Fla.
Men’s Golf
The men’s golf team completed its fall season with a sixth-place finish at the Saratoga National Invitational in Saratoga Springs, N.Y. this past weekend. Stern sophomore Patrick McNary led the Violets as he tied for 12th place, shooting a team-best four-over-par 76 followed by a two-over-par 72. Three Violets tied for 20th place, as Stern first-year Joseph Burlison, Stern first-year Moibhi Tyndall and Tisch sophomore Robbie Keyes all shot a 154.

The men’s golf team resumes action on March 9, as they will compete in the UAA Championship in Palm Coast, Fla.
Women’s Tennis
Two members of the women’s tennis team competed at the Oracle Cup in Rome, Ga. this past weekend. Playing as a doubles team, CAS junior Coco Kulle and Stern senior Fleura Shiyanova competed for seventh place against a doubles team from Bethel University. The NYU duo won the match 6-3, 7-5 earning them seventh place in the tournament.

The women’s tennis team returns to action on Feb. 23, opening up their spring season versus Haverford College.

A version of this article appeared in the October 15 print edition. Email Brendan Duggan at [email protected]