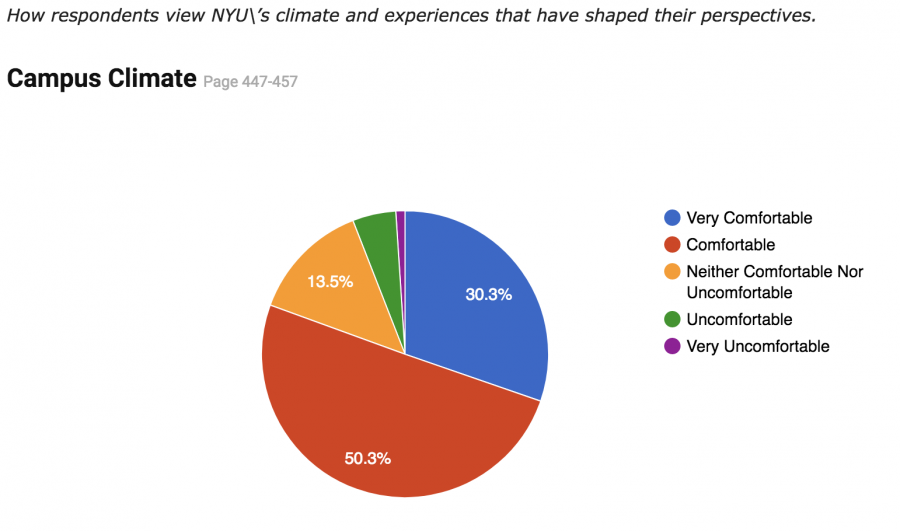 Thirty-one percent of all students, faculty, staff and administrators took the heavily advertised [email protected] survey in the fall 2017 semester, administered as a means of gauging quality of life at the university. On Monday, the survey’s findings, detailed in a 600-page report, were released to the NYU community.

Over the past several days, a team of WSN editors read the entirety of the report to identify its key findings. Below are five important takeaways.

Different constituencies responded to the survey at varying rates.

A significant number of faculty believe hiring practices are unfair.

The NYU community experiences hostility in an array of contexts.

17 percent of survey respondents indicated that they personally “had experienced exclusionary, intimidating, offensive and/or hostile conduct that interfered with their ability to work, learn or live at NYU within the past year.”

Of those who said they have experienced hostility, 44.3 percent felt it was due to their racial and/or ethnic identities, while 25.8 percent felt the hostility was a result of their gender or gender identity. 72.2 percent described the perpetrator as either a student or a faculty member.

Though many at NYU have recently considered leaving, most survey respondents felt comfortable with the campus climate.

A version of this article appeared in the Tuesday, Oct. 9 print edition. Email the WSN News Desk at [email protected]