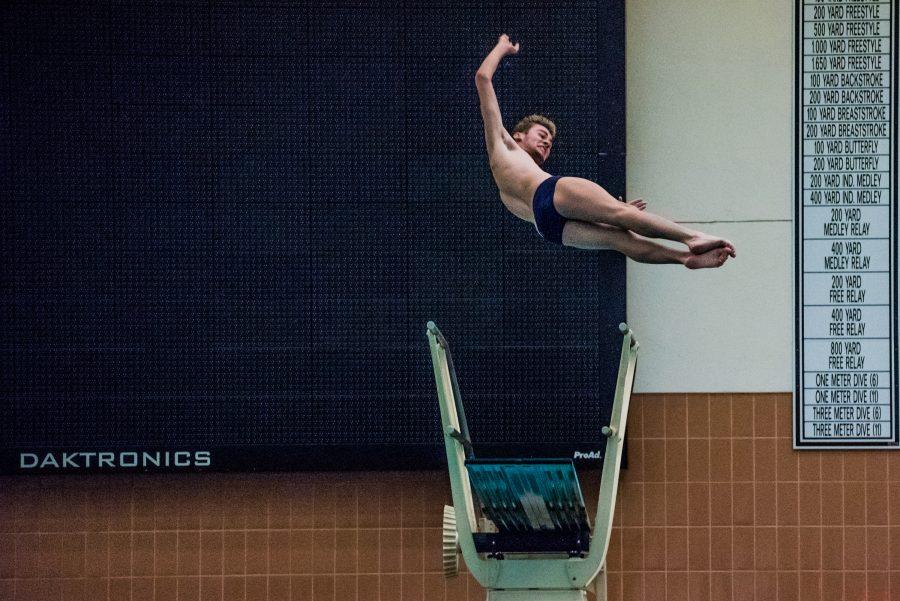 First-year Cole Vertin dives in a win against West Chester University of Pennsylvania on Oct. 6. (Photo by Sam Klein)

After taking first place at the Williams College Fall Invitational on Sept. 29-30, the NYU women’s golf team looked to add another first-place finish to its name when it competed in the General’s Invitational at Washington and Lee University from Oct. 7-8. After day one, the team ended with a team score of 302, which put it in second place behind rival Carnegie Mellon University by two strokes. The Violets stormed back in day two, snatching first place from Carnegie Mellon by five strokes with a final team score of 599.

Leading the NYU women’s golf team was CAS junior Arisa Kimura, who shot an NYU record-tying three-under-par. Her record performance earned her the individual title in a pool of 65 golfers. Other key performers for the team were SPS senior Patty Treevichaphan, who finished tied for fifth overall, and Tisch sophomore Jessica Wu, who finished tied for 16th place.

The NYU Violets are now ranked fourth in the nation after their stellar performances these past two weeks. They look to make it three first-place finishes in a row when they host the NYU Invitational from Oct. 13-14.

Coming off a disappointing loss against UAA rival Carnegie Mellon University on Sept. 29 that broke its seven-game win streak, the NYU men’s soccer team looked to come out strong against another UAA rival when it visited 21st ranked Case Western Reserve University on Oct. 6.

The Violets became gradually more aggressive on offense as the first half went on, scoring a goal late in the first half. CAS senior Alexander Dano assisted on a goal by CAS junior Owen Smith. The Violets continued that aggressiveness in the second half when Dano scored a goal only five minutes in. LS sophomore Maxi Rodriguez cemented the victory with a goal in the 84th minute, and the game ended in a 3-0 shutout. Goalkeeper and CAS senior Grant Engel was flawless in goal, rejecting all three of CWRU’s shots on goal and claiming his fourth shutout of the season.

The NYU men’s soccer team avoided falling 0-2 against UAA rivals and will take a break from UAA play when they take on Sarah Lawrence College on Oct. 7.

The NYU women’s soccer team looked to carry its momentum of a two-game win streak as it played Rutgers on Oct. 2 and UAA rival Case Western Reserve University on Oct. 6 this past week.

However, the match ended in a scoreless tie. Despite NYU outshooting Rutgers with nine shots on goal to Rutgers’s four, both goalkeepers were at the top of their games and did not let a single shot score.

In the second game of the week against Case Western, the Violets remained undefeated in UAA play with a 2-0 shutout. The defense stayed consistently strong under the leadership of goalkeeper and Stern sophomore Meghan Marhan who rejected all three of Case Western’s shots on goal. Stern junior Isabelle Turner led the offense, scoring the only two goals of the game just four minutes apart early in the first half.

The Violets look to stay undefeated in UAA play when they host Emory University on Oct. 12.

Men’s and Women’s Swimming and Diving

Despite the team loss, two athletes shone in their events which is a positive sign for the young season. CAS first-year Rachel Reistroffer had a brilliant debut, winning both the 500- and 1,000-yard freestyle, posting times of 5:10.11 and 10:26.01, respectively. CAS junior and diver Carmen White was the other silver lining in the loss, winning the 3-meter dive with a score of 277.42.

The NYU swimming and diving team with host Rowan University on Oct. 20.

It was a rough weekend for the NYU women’s volleyball team after it dropped back-to-back games against Widener University and Stockton College on Oct. 6 at the Stockton Tri-Match.

The first match against Widener tested the Violets’ resilience, but they ended up coming up short when they fell to Widener in five sets (25-19, 23-25, 25-22, 22-25, 15-12). The Violets overcame two one-set deficits during the match but eventually lost in the fifth set after Widener University broke a 5-5 tie with consecutive points and led the rest of the way. CAS senior Nazzerine Waldon led the team in kills with 13 and CAS senior Daryl Mitchell led the team in assists with 23.

Fatigue began to show after the hard-fought battle against Widener University when the Stockton College Ospreys swept the Violets in three sets (28-26, 25-22, 25-17). Waldon led the team in kills with 10, while SPS senior Katie Goyette led the team in assists with 16.

The NYU women’s volleyball team looks to bounce back when it competes against rival Carnegie Mellon University on Oct. 13-14.

A version of this article appeared in the Tuesday, Oct. 9 print edition. Email Zach Han at [email protected]