Paul Romer was honored for his work in "integrating technological innovations into long-run macroeconomic analysis." 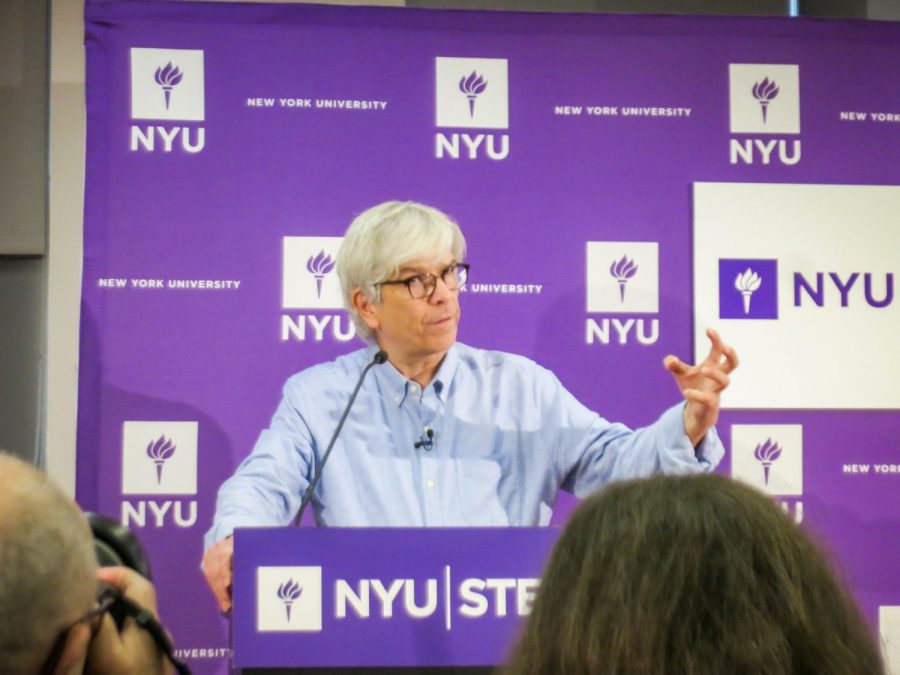 Paul Romer, a professor at NYU's Stern School of Business, won the 2018 Nobel Prize in Economics. (Photo by Victor Porcelli)

Romer is credited with applying — and highlighting the benefits of — macroeconomics in a way that serves a public good, especially in the context of urbanization. He shares the prize with Yale University professor William Nordhaus, who was recognized for his own work on the critical importance of climate change and how economics can provide a solution. Despite the more technical language used by the academy, Romer is unique in his attempts to make his research digestible for more than his fellow economic experts.

He and Nordhaus are both known for the optimistic lense through which they view and apply their work.

“In selecting doctors Romer and Nordhaus, the Royal Swedish Academy of Sciences has recognized economic research that is, in its essence, an optimistic view of the power of economic theory,” President Andrew Hamilton said in a press conference at the Kaufman Management Center. “Paul’s work in particular centers on economics as it applies to real life, and it teaches us that technology is something we can and should harness for the collective good.”

Romer taught for some time at Stanford University, becoming a prominent economist for his theory concerning the effect of ideas on growth. Previously, economic theory suggested ideas were a public good, accessible to all, and that more effort toward the creation of ideas would not result in an increasing amount of them. Romer created a more accurate model showing that when the money and resources put into generating ideas increases, the number of ideas does too, which in turn spurs the rest of the economy. This better explains why corporations, which are the primary funders of private research, often have monopolies on certain ideas like the formula for a drug or the patent for a product, and so emphasized the importance for government and universities to invest more into research to allow an increase in the number of ideas accessible to the public.

Romer took a break from teaching in 2001 to start Aplia, the educational technology company currently used by NYU and other universities to interactively teach subjects like economics. In 2007, Romer sold Aplia to Cengage and came to NYU as he was looking for a university willing to “take a risk” and apply his research in an urban setting, according to Romer. NYU was willing, said Stern Dean Rangarajan Sundaram at the press conference.

“He came to Stern in 2010 where he set up the Urbanization Project, in which they, amongst other things, studied the way cities can be harnessed to advance growth and progress and how to shape urbanization itself to better the life of humankind,” Sundaram said.

More recently, Romer was appointed the Chief Economist of the World Bank in 2016 but resigned after 15 months due to controversy after an annual “Doing Business” report ranked Chile significantly lower while under a socialist president. Romer resigned after being criticized for suggesting the lower ranking was politically motivated and promising to redo the report.

Since then, he went back to teaching, seeing the university as a way to contribute to a larger community, something he feels is of great importance.

“You can’t get drawn into the awards. You need to commit to something that’s larger than yourself, that’s what keeps you going,” Romer said at the press conference. “That sense of belonging means you can take satisfaction out of a career whether or not you happen to be the one who gets a prize for it.”

A version of this article appeared in the Tuesday, Oct. 9 print edition.