Staff Recs: Best Songs To Fall In Love To

Fall is the season when everyone wants to find in love — here are the best songs to indulge your inner romantic. 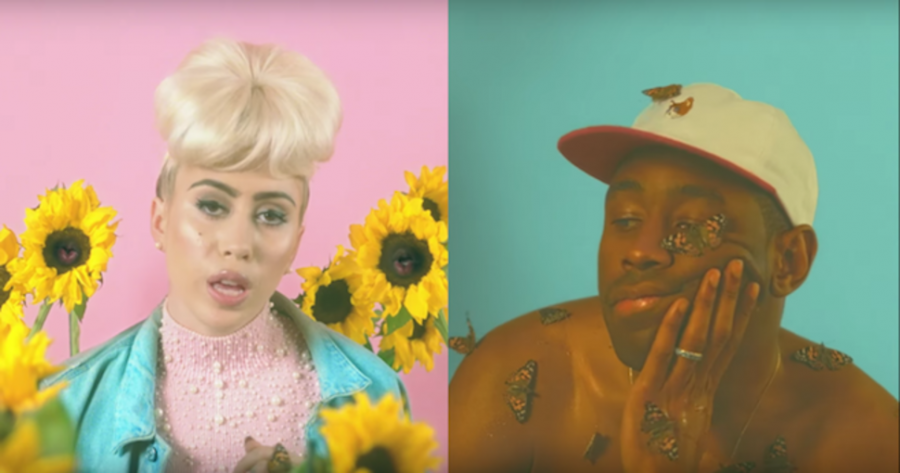 Kali Uchis and Tyler, The Creator in the "Perfect" music video.

It’s that time of year again: the sweaters are out and the weather has reached a mostly consistent 70 degrees. It must be cuffing season. Whether it be the bevy of fall rom-coms or just something in the water, students and professionals alike are searching for that significant someone and what better way to fall in love, or at least meditate on the prospect, than with a playlist of butterfly-inducing, heart-pounding pop songs. At WSN, we aren’t all in love, or even in a relationship for that matter, but if we can agree one thing, it is that we love love. So get your Pete Davidson and Ariana Grande Pinterest boards ready and let’s get sentimental with our picks for the best songs to fall in love to.

“Lover Is a Day” by Cuco
Ryan Mikel, Arts Editor

You know that scene in Darren Aronofsky’s “mother!” when Jennifer Lawrence rips out her heart and gives it to Javier Bardem? Well, that is how I feel about Cuco and his melodramatic masterpiece “Lover Is a Day.” The 19-year-old sad-boy heartthrob wrote the song in his South Los Angeles bedroom, and you can definitely feel that lo-fi, lethargic energy in the song’s seven-and-a half-minute runtime. Set against a score of synthesizers and a delicate trumpet solo, “Lover Is a Day” sees Cuco bargaining with an unidentified lover, professing lyrics like “will you love this part of me” and “I’m okay as long as you keep me from going crazy.” According to Genius Lyrics, the song is a soliloquy on Cuco’s struggle with mental illness and how that relates to his significant other. While he eventually reveals that his inability to cope with his own insecurities causes problems for their relationship, the lyrics “my lover is a day I can’t forget” is the most romantic thing I’ve ever heard, and I’d ride with Cuco until the bitter end.

“How Deep Is Your Love” by the Bee Gees
Daniella Nichinson, Arts Editor

We’re taking it back to the heavenly time when John Travolta was king of disco and a group from the Isle of Man reigned over the music scene: the 1970s. The aforementioned group is the Bee Gees and their song “How Deep Is Your Love” is not only one of their finest compositions but also a gift to your ears when you cross love’s path. Something about the sublime blend of the voices of the Gibb brothers lets the tender words flow through your veins, directly to your heart. From the soothing melody to the amorous harmonies, “How Deep Is Your Love” opens up tender feelings of endearment. Just imagine Barry Gibb serenading you with “You know the door to my very soul, you’re the light in my deepest, darkest hour, you’re my savior when I fall” and you’ll find yourself floating high in the air of romance.”

I’m going out of the country for this week’s staff recs. “Hosanna” is a Tamil song from the 2010 Kollywood romantic drama “Vinnaithaandi Varuvaaya” (“Will You Cross the Skies For Me?”), done by Indian composer A.R. Rahman. The album was released in late 2009 before the film’s release but after Rahman’s double Academy Award win for “Slumdog Millionaire.” Thus, there were almost insurmountable expectations for him. Somehow, “The Mozart of Madras” one-upped himself. Many artists have been able to thoroughly capture the longing, loss, ups, downs, twists and turns that come with being in love (and the entire album of “Vinnaithaandi Varuvaaya” does this). But there is no better song in the world that has been able to portray the feeling of when you first fall in love like “Hosanna.” From the song’s first few seconds, it’s as if you can literally feel the the wave of eye-opening passion that has washed over lead character Karthik (Silambarasan Rajendran) when he falls in love at first sight after meeting his new neighbor, Jessie (Trisha Krishnan). It’s the same passion that we have all felt when we start falling for someone. From Vijay Prakash’s boasting vocals to Suzanne D’Mello’s angelic hums and Blaaze’s peppy rap portions, all strung together by Rahman’s godly musical compositions, the song is unabashedly hopeful. The beauty of “Hosanna” is that it is able to work on so many layers that you’ll interpret it differently from the first to the hundredth listen. As we change in our own life and go in and out of different relationships, so does our perception and interpretation of “Hosanna.” There are other versions of the song (the film was also made in Telugu and Hindi), but I’m choosing the Tamil version as that is the language I speak. While most readers have most likely not heard “Hosanna,” or Rahman’s work in Indian cinema in general, they will become instant fans after hearing this wonderful song.

The entire “Flower Boy” album is a work of art; a tribute to Tyler, the Creator’s softer side he’s buried in his previous works. On his track “See you Again” featuring Kali Uchis, Tyler brings out his inner troubled romantic in a perfect little love song that’s earnest, sweet and a little sad. He raps to a lover that exists only in his head, but the love and the pain of a love that’s out of touch translates through his lyrics. Uchis’ vocals compliment Tyler’s verses with a passionate melody that elevates the track and gives it a sexy finish. A gentle keyboard harmony backs the beat and smooth flowing synthesizer, and touches of xylophone and trumpet give the song a dreamy vibe perfect for having a moment with that special someone.

Yeah, I know. This song probably isn’t what comes to mind when you think of romantic tunes. Every record by the dream-pop duo is tinged with sadness, and this one’s no different. But you can’t taste sweet without knowing bitterness. The lyrics by songwriter and vocalist Victoria Legrand are inscrutable in the best way, but Alex Scally’s instrumentation is where the song gets its most romantic. The ethereal layering of slide guitar and delicate, bouncing synths with a slow, steady drum line makes for the perfect end-of-the-night slow dance.

This being their second entry on the list, I think it’s safe to say that Tyler, The Creator and Kali Uchis are your go-to’s for falling in love or at least for daydreaming about that cute boy in your Cultures and Contexts class. “Perfect” is less of a love song and more of an outro on the longer complete single “F-cking Young / Perfect” off of “Cherry Bomb.” I find these two and a half minutes to be the most ethereal, heartstopping, butterfly-inducing seconds of any song I’ve come across this century. Backed by a doo-wop, percussion-heavy sample, Uchis croons the lyrics “Boy, I know that we could be more than friends, but you’re scared” to which Tyler responds “Girl, just say the word.” These lyrics repeat frequently throughout the next minute or so, along with sweet little testimonies like “F-ck em all, baby, it’s just you and me.”

Things then take a turn for the emo when Uchis and Tyler transition into a guitar riff-backed acoustic section. They both harmonize “You make me better and I know this don’t make sense” as their vocals echo into the next line as if to give off of the illusion that they are the only people in the world. In the accompanying music video, the pair is separated on two screens: Tyler is covered in butterflies while Uchis is surrounded by flowers. By the video’s end, the butterflies have migrated to Uchis’ side of the screen, and if that isn’t cinematic poetry, I don’t know what it is.

“There Is A Light That Never Goes Out” by The Smiths
Nicole Rosenthal, Music Editor

Ah, nothing like the sound of sweet sarcasm to woo your valentine. That is exactly what Morrisey was getting at with the 1992 alt-rock hit “There Is A Light That Never Goes Out.” Featuring such sentiments as “If a double decker bus crashes into us, to die by your side is such a heavenly way to die” it is hard to imagine the tune as a satire on love itself. Yet, a poetic quality lies hidden beneath the surface of the song, perhaps submerged between early-nineties post-punk production and the unsettling wail of Moz’s register. Despite the lyrical ironic intentions, as Morrissey himself discussed the song was about how silly it is to fall in love, the tune has a dark whimsical charm that apparently got better with age. Beautiful, mysterious and a tad unnerving, “There Is A Light That Never Goes Out” is a love song in many forms.