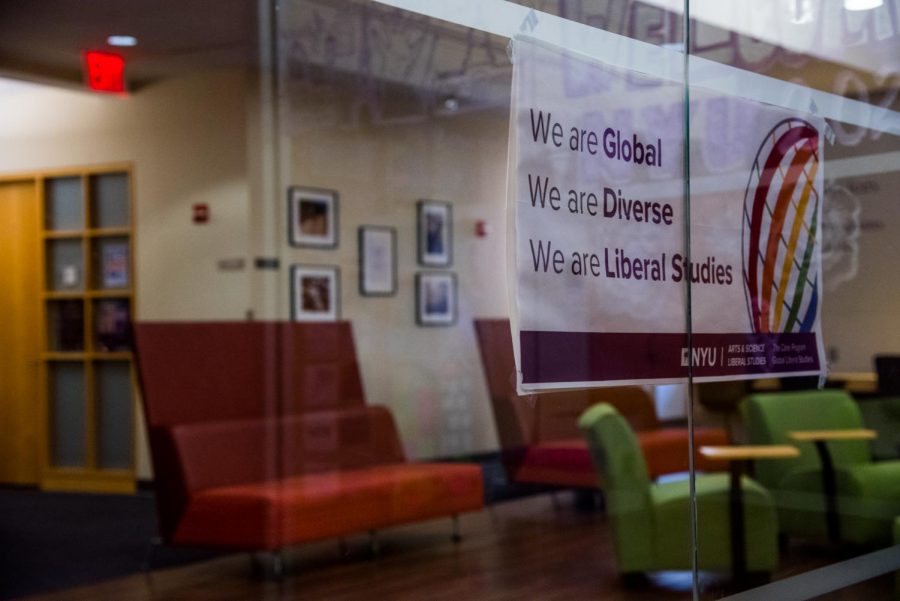 Students in the Liberal Studies class in which Milo Yiannopolous was slated to speak said they were upset to hear about his visit. (Photo by Sam Klein)

As NYU welcomed the class of 2022 this past week, first-year students could be spotted on every block of Greenwich Village donning purple lanyards and bonding, semi-awkwardly, with new friends. But not all first-year students will begin their undergraduate experiences just yet.

For the class of 2022 spring admits, the fall semester will be spent on other endeavors: from internships and jobs to taking classes at local colleges. These students will begin their studies at NYU in January 2019, and their first full academic year will end in August after a rigorous summer course load, setting them on track to complete their degrees on time.

NYU’s spring admission program debuted last year with 83 Liberal Studies students forming the inaugural class. According to Associate Dean and Director of Admissions Jonathan Williams, 341 students were admitted for spring entry in the first year, with the university expecting 75 to matriculate. This year, the program will expand —  the Tandon School of Engineering, Steinhardt School of Culture, Education, and Human Development and LS will all have spring admits in January 2019.

In the past few years, NYU has seen an increase in applicants, with more than 75,000 hoping to join the class of 2022. That’s up 12 percent from the class of 2021, which saw around 67,000 NYU hopefuls. The university has an 11-year streak of record-breaking application numbers.

And according to Williams, with the rise in applications came a shift in the strength of applicants.

“The introduction of spring admission allows us to select more of these outstanding students to be part of the NYU community,” Williams said.

There is no separate application for the spring admission program. Williams noted that any student who applies to NYU could be considered. Students accepted for spring entry can defer admission to the next spring semester but not to the following fall.

When LS sophomore Lin Ye first applied to NYU, she was placed on the waitlist. Ye was surprised when she was eventually accepted, but there was a catch: she’d be starting as a spring admit.

“When I first found out I was confused,” Ye said. “There were not a lot of us and they didn’t really give us much information — a few emails here and there over the gap semester.”

LS sophomore Lauren Roche also received notice that she was admitted for the spring semester after being placed on the waitlist. She was ambivalent toward the late start, but ultimately decided to accept the offer.

“I was extremely happy to have gotten into my dream school, but a little let down I had to wait a whole semester before I experienced it,” Roche said. “I vividly remember showing my friends the email the second I got it and when my friend brought it to my attention that it said January, a part of me was upset, but still
grateful nonetheless.”

Though the spring admits will graduate with the rest of the class of 2022, they often feel set apart because of the unique circumstances.

“A lot of my spring admit friends have said they felt like the fall kids were kind of aloof when it came to the spring admits — there was some sort of superiority they ended up feeling entitled  to because they started before us,” Roche said.

Williams hopes to posit a solution, citing that with the addition of Tandon and Steinhardt to the program, all three schools will be coordinating orientation programming — including community service and a presidential welcome reception — before the spring semester.

Another road bump was the demanding summer semester. The students took three LS Core classes — Writing II, Cultural Foundations II, and Social Foundations II — in 10 weeks. Roche added in one more to her load, a six-week Intro to Microeconomics course.

“My summer semester was by far the most academically challenging endeavor I have ever faced,” Roche said, continuing, “the workload was intense seeing as the semester was drastically condensed, and adding a fourth class on top of that was a rather bold decision on my part. It ended up being manageable, but stressful.”

Despite the rigor of the summer and other hardships that included a period of adjustment to the city and university, Roche and Ye both believe that the spring admission program facilitated positive experiences, from the gap semester to a tight-knit community.

Roche worked two jobs in her fall gap semester to save money for her move to New York. She also spent time with friends and family because she knew that when she returned home, things wouldn’t be the same.

In her gap semester, Ye moved to Los Angeles to intern at a real estate brokerage firm for four months.

“I absolutely loved it,” Ye said. “At first being a spring admit was extremely scary and nerve-wracking, but I’m extremely grateful for the opportunity because I was able to work an internship that I wouldn’t have been able to do otherwise.”

The other benefit was that the small cohort of 83 found in each other, after sharing everything from courses to residences.

“The transition was stressful but we all had each other — over time we became a small little family,” Ye said.