Sex, Drugs and the Story Behind NYU’s Reality Show 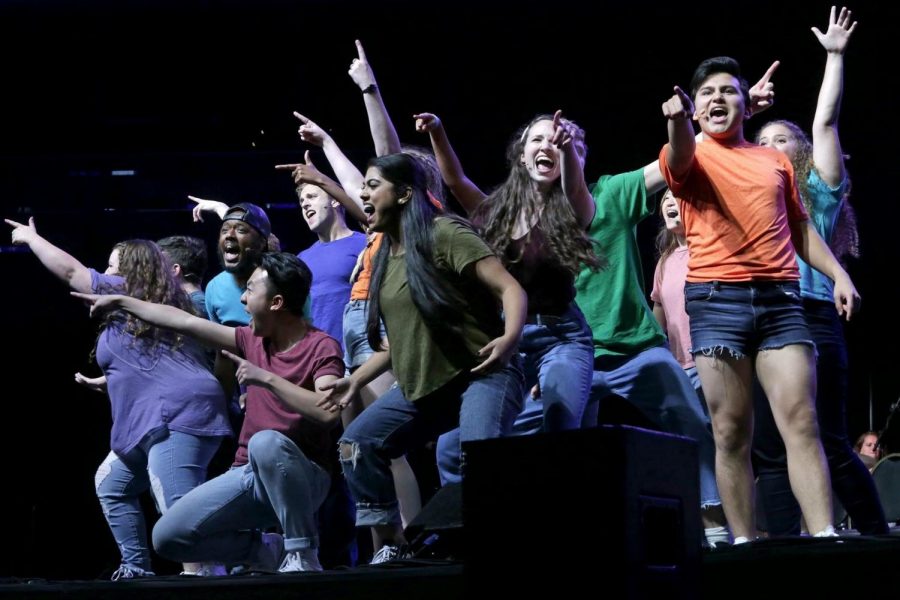 Students performing in the annual Reality Show at Barclays Center.

“Wear a condom. Don’t use drugs. Be yourself and know that that is good enough.”

Sex, drugs and identity are all topics we haphazardly discuss in a high school health class or during an awkward lecture from mom and dad. They aren’t always easy or fun to talk about, but for every fragile first-year, there is a lesson to be learned from such discussions. And at NYU, a crop of upperclassmen want to help to lighten the load.

Every year, the university welcomes the incoming first-year class with a Presidential Welcome at Barclays Center. The highlight: a half-hour variety show of songs and sketches on topics adderall, city life, mental health and online dating. Ask any upperclassmen, and they’ll remember this event — “The Reality Show” — like it was yesterday.

The annual performance got its start over a decade ago after a string of student suicides left the student body and administration in a frenzy. To facilitate to students’ safety, the Health Center implemented the Wellness Exchange Hotline, a 24-hour hotline to put students in touch with a professional to discuss day-to-day challenges and health concerns, which was replaced with a more creative alternative in the form of “The Reality Show.”

“There was no other way to get this information out besides the one time that all of the [first-years] are in a room together until they graduate: the Presidential Welcome,” Chloe Troast, a Gallatin senior and Reality Show cast member told WSN.

Working with student health services, former Experimental Theater Wing Professor Liz Swados curated the inaugural performance. Initially using professional actors, Swados eventually cast around a dozen students across all schools from a pool of over 100 applicants to bring the show to life. Now in its 14th year, “The Reality Show” is a staple of every first-year’s experience, and for rising sophomores Andrés Goldszmidt and Lisha Payne, a push to join the wellness iniative themselves.

“I found it inspiring that students were so boldly and openly talking about topics like race and sexuality,” Payne said. “It set a precedent at NYU that this is how we talk about these things. We are open to them and we are going to share them.”

After callbacks and selections are made, cast members are given a list of topics. Over the summer, they will draft sketches and musical numbers that relay this information in creative, relatable ways for the fresh faced student body. Roundtable discussions about the show’s material are periodically held with the Director of Counseling and Wellness Zoe Ragouzeos, in addition to daily rehearsals with Director Preston Martin, Assistant Director Rachel Pegram, Music Director Matthew Dean Marsh and Movement Director Flannery Gregg.

While the final product is a collaborative effort among the group, certain topics featured and themes are the products of individual members. Inspired by her own “Reality Show” experience, CAS junior Morghan Brown wrote a segment in the show titled “Resilience,” which draws from the 2016 monologue “I Am Black” by Rachel Pegram, tackling with race and identity issues. Tisch junior Gus Laughlin wrote a handful of sketches that deal with sexuality and LGBTQ issues. For Laughlin, hearing and writing these sketches proved cathartic.

“We cover sexuality in a way that has been really beneficial for me in terms of my relationship with my own sexuality and identity,” Laughlin said. “There’s a way to make it fun and casual, but also communicate the facts of it.”

A lot of sketches and ideas from the roundtables don’t make it to the final stage, but for the students involved, the creative process is important for them to understand one another and their own experiences. Even if the show satirizes or makes light of certain topics, the moments on stage are still deeply rooted

A public performance of “The Reality Show” will be held on Sept. 4 at the Skirball Center for the Performing Arts.

A version of this article appeared in the Sunday, Aug. 26 print edition. Email Ryan Mikel at [email protected]