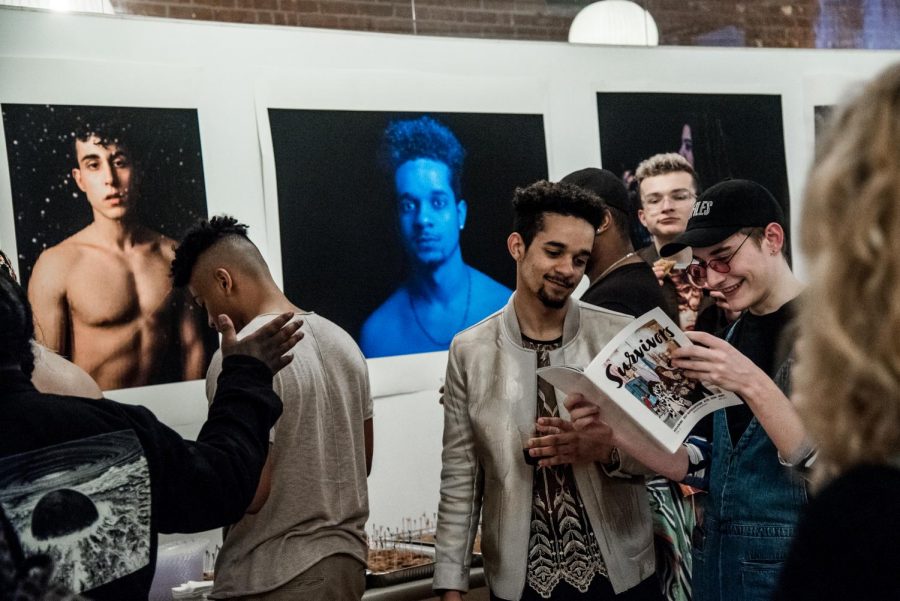 At the release party for Survivors Magazine, two attendees look over the new issue. The magazine uses photography as a way to increase awareness of sexual assault.

Rehanna Almestica’s words ring with power as she addresses the attendees of Survivors Magazine’s release party. The room, filled with survivors of sexual violence and supporters, responds with a round of snaps and ‘mhmms.’

Surrounding them, photos of survivors cover the walls, radiating beauty and confidence. Near the entrance of the gallery, Almestica looks like royalty in her portrait.

Almestica is one of 10 survivors featured in the second issue of Survivors Magazine, which was created in September 2016 by Gallatin junior Maria Polzin in partnership with NYC Alliance Against Sexual Assault. The release party for the new issue took place Friday evening in the studio of Reflections Center for Conscious Living & Yoga. There was music by artists Fih and Easy Socks, as well as poetry and speeches from survivors.

Survivors Magazine’s goal is to use fashion and photography to empower survivors of sexual violence and raise awareness of sexual assault. The magazine, which prints once a year, is run by Polzin and her team composed of NYU students and New York City area survivor supporters. The survivors chosen for this issue come from diverse backgrounds — from sexuality to religion to age — each survivor has a unique backstory.

For Polzin, continuing conversations about rape and assault is incredibly important right now, especially as these issues are receiving more attention in the media.

“As a lot of people have been talking about #MeToo and Time’s Up; it has created a media attention around sexual violence that I didn’t know if I would see in my lifetime,” Polzin said. “That’s amazing because when I was speaking at this event one year ago, I was talking about how sexual assault is so taboo that the first step is just raising awareness that it’s happening.”

While Polzin, along with the survivors, expressed how happy she is that movements like #MeToo are creating a dialogue across America, she also believes that society still needs to give survivors the space to share their own narratives, ones that aren’t retold by the media.

“There’s not that many spaces, even as the #MeToo and Time’s Up movements continue to rise, for survivors themselves to have control over their narrative and how they want to be represented to the public,” Polzin said. “What Survivors Magazine is all about is giving self-representation back to survivors of sexual violence because they lose so much power when they go through the experience.”

Each participant in Survivors Magazine had the autonomy to choose how their spread portrayed them and their stories — from the styling to the writing, they had full control. Some survivors chose to write narratives to accompany their pictures, while others chose poetry.

For NYU alumna Olivia Johnson, who graduated in 2012, having the power to control her photoshoot meant everything. She chose to take photos on the block she used to live, the place she was assaulted.

“It was an interesting opportunity to be able to go back there and reclaim some memories from that space,” Johnson said.

Survivor Nelly Bess chose to show her sexy side in the photos. In the large-scale photo displayed in the gallery, Bess and her partner are shown intertwined in each others’ arms, sharing an intimate moment.

“A lot of times, when you heal from sexual assault, you feel unattractive in your body and you deal with a lot of trauma in your body,” Bess said. “I chose to do a kink-inspired thing because my partner told me that my trauma wasn’t going to make me less desirable. I wanted to show that even as a survivor, you can be sexy, you can be intimate with your partner.”

The same message echoed through the poetry Bess performed later in the evening.

“When you go through sexual assault, you become a stranger in your own body,” Bess said. “[My poem] is basically about my body not responding when I want to be intimate with somebody I love.”

This is a problem that many of the survivors could relate to. As Bess passionately performed her poem, the crowd clapped and cheered in support.

Later in the night, Polzin delivered a speech on how society could better handle sexual assault.

“The key to prevention is consent,” Polzin said. “I feel like [talking about] consent is just as taboo as assault.”

For Polzin, consent needs to be discussed more. In order to do this, she is in the process of creating a clothing line called ‘Consent,’ which she plans to drop in spring 2019. According to Polzin, those who purchase these clothes have a social responsibility to explain what consent is whenever someone asks where their clothes are from.

“[People act] as if like, when you’re intimate with someone, you can’t ask them if they’re comfortable every step of the way,” Polzin said. “But that, to me, is sexy.”

A version of this article appeared in the Monday, April 30 print edition. Email Natalie Chinn at [email protected]