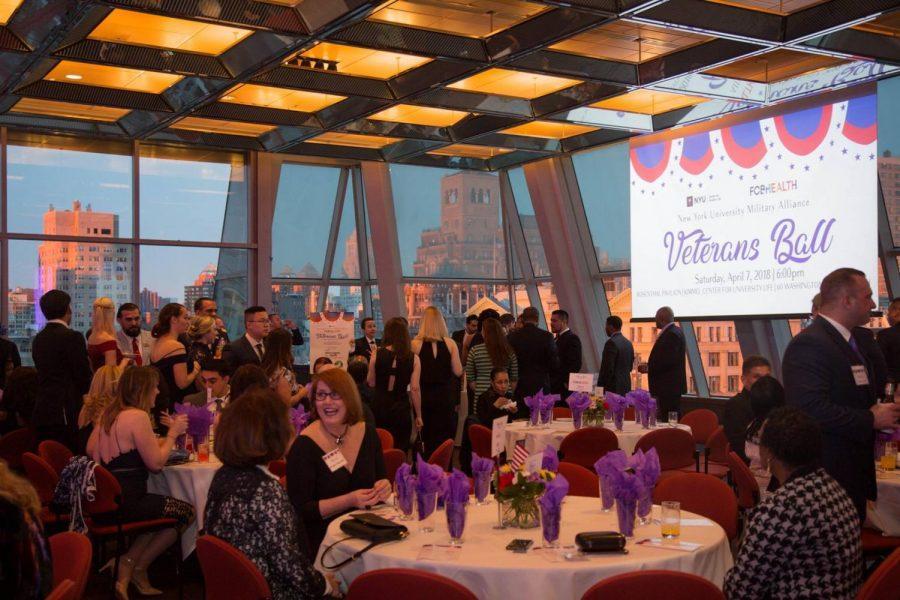 “It feels good to be remembered,” said Vernon Druses, a veteran of the First Gulf War who now works for NYU Langone, as he stood within a small crowd of mingling adults at a cocktail reception in the Kimmel Rosenthal Pavilion on Saturday, April 7. However, this group was unique from the typical fundraising crowd: awash in the slight glow of purple and surrounded by the beautiful skyline of New York City in the early evening, many of the guests were dressed in full military uniform.

Druses’ musing articulated a palpable common feeling of recognition and comradery within the hearts of those present at the NYU Military Alliance Veterans Ball. This was an event to honor the veterans in NYU’s community as well as recognize those in this year’s graduating class who are veterans or directly connected to the military.

The Veterans Ball is organized each year by the NYU Military Alliance and has continued to grow since its debut three years ago. Rollie Carencia, the assistant director of the Center for Student Life, emphasized the developing nature of the event as the Military Alliance continues to grow.

“When I first started this position, our veterans really wanted to be visible on campus,” Carencia said “They wanted to build community. They wanted to connect and engage with other veteran students. So this has been an event that has been developing for the past three years. The first year we had like a hundred people. Last year, we had maybe, we were hoping to reach 130. This year, we’re at 200.”

The Military Alliance outgoing President Mary Nadolny, a United States Navy veteran who served for 28 years, echoed Carencia’s sense of pride in the development of the organization and the event. In addition, Nadolny, who issued the Presidential Welcome speech, expressed the underlying feeling of connection.

“It is that instant relationship that being military gives you,” said Nadolny. “In a city like New York, it’s not necessarily a military town. So it kind of gives us that back, which is a real pleasure.”

This feeling of connection and a mutual past experience is what Durses had expressed eloquently and succinctly. For Durses, the event offers a recognition that so often lacks for veterans who have come home.

These experiences of feeling forgotten can be isolating, especially after facing war and building a community with other soldiers and then returning to the civilian world in which most people have never served in the Armed Forces or seen war firsthand. Druses praised the uniqueness of the Veterans Ball for drawing together so many veterans from varied generations.

This event holds great meaning to those who have served and sacrificed for their country, yet it also creates a unique space for people in and adjacent to the military, including current NYU students.

Madison Kitchen, a junior in Tisch, not only sang the National Anthem beautifully at the event but also had a personal connection; she is a military dependent. Her father has been in the military for 28 years, having deployed to Afghanistan for 15 months when she was nine. Kitchen is in the Military Alliance and expressed the necessity of the event’s inclusion of different people who have been impacted by the military.

In this way, Kitchen articulated another important aspect of the event: inclusion. The Veterans Ball glowed with the pride not only of the veterans but of those who are connected to the military by being directly related to veterans. Maj. Gen. Jack Briggs, who is retired from the Air Force, made special note of the need for inclusion within the military community by beginning his keynote speech with a round of applause not for the veterans themselves but for those in the room who were related to veterans.

While speaking, Briggs emphasized the unique skills that veterans retain when they return to civilian life as well as the need for community in order to make the transition. Briggs also praised NYU for its devotion to veterans.

In concluding his speech, Briggs challenged the veterans in the room.

The aura of patriotism and pride filled the entire room as everyone digested Briggs’ call to action to support the U.S. as staunchly as the veterans had while in uniform.

Heber Zavala, a member of the Air Force Reserve Officers’ Training Corps Detachment 560 based at Manhattan College that presented the colors at the event, explained the necessity of understanding the history of the military for guiding its future.

“It’s kind of interesting just to see because it’s like the next generation,” said Zavala. “We’re the future, and we’re seeing the past in front of us. All these great men and women in uniform who decided to serve, and now we get to be the next generation.”