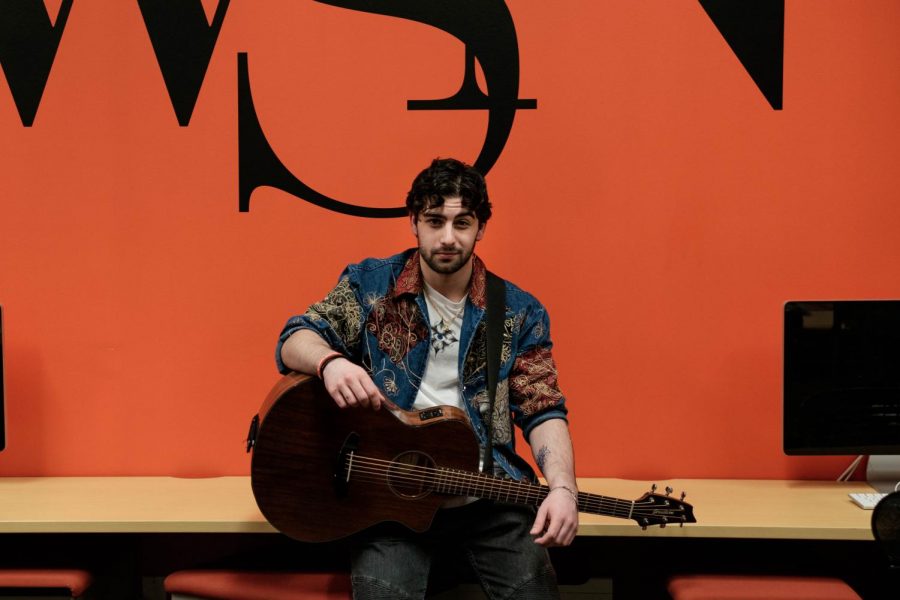 Michael Manzi is a singer-songwriter from Ardsley, New York. As a Gallatin sophomore, the musician studies the ties between art and love, and his performance at WSN was a reflection of this study in many ways. Most of his songs dwell on artfully written depictions of love and all that comes with it.

Manzi closed his TKTK session with “Hastings,” perhaps his best meditation on romance. Written about the pitfalls of love, Manzi crooned about his personal struggles with definite conviction. His vocal dynamics were great, and the confessional nature of the song was clear. It was a great example of Manzi’s potential as an artist, and was his best performance of the session.

But the theme of love or the loss of it didn’t just permeate through the final song, but rather the whole set. Given his musical interests and academic concentration, Manzi clearly has an interest in the concept of that all-powerful four letter word and its ties to art.

“My studies are based in a positive psychological theory that the mind is its most neuroplastic, its most adaptable, when you are experiencing something similar to falling in love,” Manzi said. “My studies aim to bring falling in love and that concept and the effects of that into everything we do, change it from something that could happen once in a lifetime to on a daily basis.”

Released last year, “Copper” features a slew of percussion, horns and strings tied together with Manzi’s singing. The song strives for an atmospheric soundscape, with tightly tuned reverb and the sound of rain that eases in and out of the song at various points. It takes a much more produced and layered approach compared to his acoustic live set.

“The things that I played today are more of a ‘standing in the bathroom washing my face for 30 minutes’ kind of process,” he said. “‘Copper’ came about a little bit differently. I had a really strong sense of the feeling that I wanted the song to have. I was workshopping it on piano for a long time before I realized that I really needed to bring it out of the acoustic world in order to get the kind full experience that I was looking for.”

Manzi’s music reflects this obsession with falling in and out of love. When asked about his opinion on love in the digital era of cellphones and social media, he explained the multifaceted nature of the issue, and how it relates to his music.

“I think in a lot of ways while we are disconnected from a lot of the original intentions of language, through texting and culture on our phones, we are also becoming more connected between our thoughts and our words,” Manzi said. “I think we are more able to connect our hearts to our sleeves.”