The Hilarity, Humanity and Insanity of ‘Professor Quotes Without Context’ 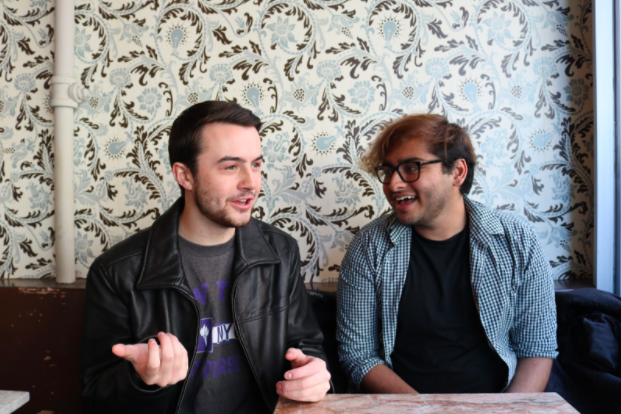 One of the great pulls of NYU is its staff of highly qualified, immensely intelligent professors — the people who have been tasked with preparing future generations. These educators lead us, inspire us and help our minds flourish, but that’s not to say that they should serve as role models 100 percent of the time.

The Facebook group “Professor Quotes Without Context” is a testament to the moments of tangential comedy or absurdity that pepper our college classes. This increasingly popular group with over 1,700 current members was created by CAS sophomores Peter Ferrarese and Nick Sawhney for students to post quotes from their professors taken out of the original context. The names of professors and classes aren’t included — only the strange, seemingly inappropriate or simply absurd utterings of our teachers.

“You all grow up being told smoking is not cool, but it is in fact very cool. I hate people who lie to children,” one post reads.

“There are so many professors that are geniuses in their field and they know that, so they can just say whatever they want without worrying about it because they know you’re still getting the information,” Sawhney said. “We’re also not in high school anymore — we’re a bunch of adults and we can handle a sex joke in class.”

The idea for the page came almost a year ago when Sawhney was in a Microeconomics class taught by Marc Lieberman. Sawhney said he would often text his roommate, Ferrarese, quotes from the professor, which they both agreed were hilarious — especially when taken out of context. From there, the group was created and gradually gained traction in the NYU community and beyond.

“It was either right before or right after Lieberman’s second midterm,” Sawhney said. “He always says really quotable things, and I was like wow, if I said that my professor said that to someone, it would be very weird.”

Lieberman was not aware of his muse status prior to WSN reaching out.

“That’s funny — I had no idea,” Lieberman said when asked about his thoughts on the page. “If I was really the inspiration for that Facebook page, then I guess I feel … honored? I always knew I’d be famous, but I figured it would be for something like ‘most typos in a single text or email.’”

The roommates had no idea that their page would take off like it has. A very active community of students from around the United States — not just limited to NYU — posts quotes regularly, with surges in use around the start of the semester and exam season. The duo has even been recognized in public as administrators of the group.

“I was in Bobst [Elmer Holmes Bobst Library] one time and I was really, really sick,” Sawhney said. “I had just come from my recitation and looked disgusting, and I was just typing. This girl from across the room just yells ‘are you the guy from the professor quotes group?’ and I just texted my friends and said ‘I can’t talk to you anymore I’m too famous.’”

As administrators of the group, Sawhney and Ferrarese are tasked with the responsibility of moderating the posts and conversations that follow. Without context, some of these quotes don’t exactly put our professors in the best light. However, Sawhney and Ferrarese said these posts, though outlandish and inappropriate at times, have never crossed the line to a point where the admins felt the need to take action.

“Something I’ve been very pleasantly surprised by is the lack of controversy in the group and the lack of fighting between members,” Ferrarese said. “It has been pretty wholesome so far.”

Spreading through tags, word of mouth and invitations to the group, people from all around the U.S. have requested to join “Professor Quotes Without Context.” The admins have started to filter out people who don’t appear to be college students, bots and even some perceived professors.

“There are some instances of people trying to join, and they look like they might be a professor,” Ferrarese said. “I want them to be able to be a part of this, but at the same time, it would be kind of weird to have a professor in this group.”

James Isaac, a first-year at William & Mary in Virginia, is one of the many users of the Facebook group since its spread outside of the NYU community.

“I found it through one of my friends who added me,” Isaac said. “I didn’t know how she knew about it though. I find the page pretty funny and entertaining. I know nothing on it can be taken seriously because it is out of context, so I feel it’s a fun way for students to connect and have a laugh.”

The mantra of not taking things too seriously was echoed by Sawhney and Ferrarese, who want the page to continue to be a hub for ridiculous quotes without judgment and unnecessary ramifications for the professors whose words are immortalized on the feed.

“They’re teachers and they are normal people,” Ferrarese said. “They’re capable of making jokes just like anyone else. It makes me like them more.”

A version of this article appeared in the Monday, March 26 print edition. Email Jemima McEvoy at [email protected]