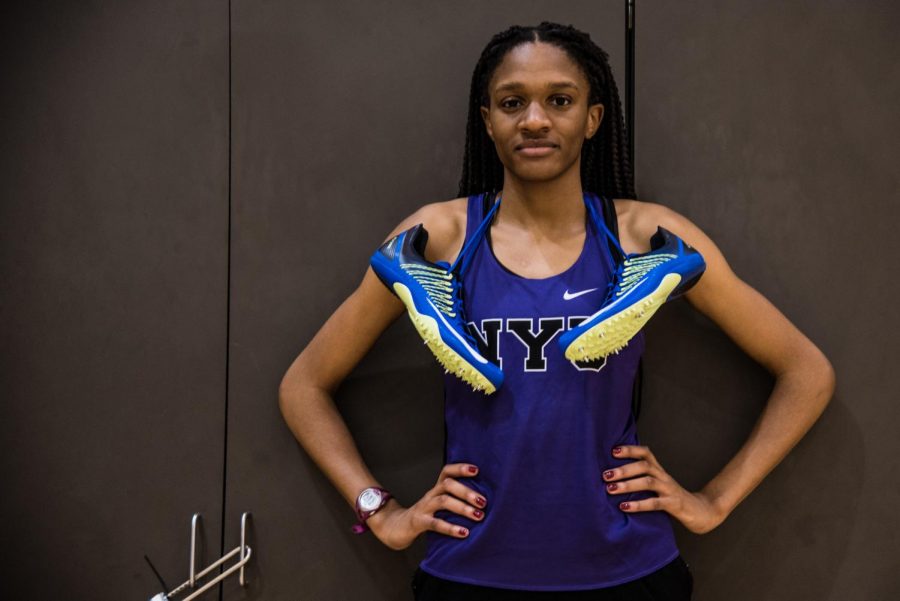 After finishing 15th at the NCAA Indoor Championships last year, Evelyn Nkanga is setting up for an impressive sophomore campaign.

Athletic excellence is the product of the countless hours athletes spend practicing, lifting weights and conditioning their bodies to hone their skills and compete at the highest level. Nevertheless, CAS sophomore and All-American track athlete Evelyn Nkanga understands that athletic success is defined as much by psychology as it is by physicality.

Unlike most collegiate athletes, the Sayreville, New Jersey native did not naturally take to sports from a young age, but rather began competing in track as a high school sophomore to fill a void of extracurricular activities. Despite the late start, Nkanga quickly proved herself to be quite the athlete by earning All-County honors during each of her three seasons on the track and field team and All-Conference honors as a high school senior while competing in both the triple jump and 4×400 meter relay.

Now in her second season on NYU’s track and field team, Nkanga continues to demonstrate athletic excellence for the Violets. The triple jump specialist has qualified twice for the National Collegiate Athletic Association Indoor Championships, been crowned both the University Athletic Association Indoor and Outdoor Triple Jump Champion and earned All-American honors as the fifth ranked triple jumper in the country.

Nkanga credits her success to her mental approach to competition. Instead of dwelling on the external pressures of the competitive environment, Nkanga competes with a placid mindset where her only competitor is herself.

“If you see me before competition, I might be doing drills, but most of the time, I’m sitting down thinking,” Nkanga said. “I just really want to be focused and I don’t try to get worried about anything. When I jump, I never look at what other people jumped during competition because I try to make sure I’m doing the best for myself and what gets me the best results.”

Nkanga also noted that her mental approach to outperform herself helps elevate the performance of her teammates in the 4×400 meter relay.

“With the 400, even though it is not my number one event, I try to be better every single time and if I am to apply that, I push my teammates to be better,” Nkanga said. “It’s all a team effort, so I’m trying to push everyone to be their best.”

In unraveling the psychology of Nkanga’s approach to competition, NYU Track and Field Coach Erison Hurtault attributed Nkanga’s success to her confidence she said. Nkanga is beginning to see how much talent and potential she possesses.

“She’s starting to understand how good she can be,” Hurtault said in a phone interview with WSN. “She is understanding the work she needs to put in to be a top four triple jumper pushing top three, pushing to be a national champion.”

With a mark of 11.86 meters and a fourth place finish in the triple jump at the NCAA Indoor National Championships on March 10, Nkanga finished the indoor season with All-American honors. However, with the outdoor season following on the heels of the indoor season, Nkanga said she will not let her indoor success thwart her mentality to continually outperform herself on route to the NCAA Outdoor National Championships.

“We have the outdoor season coming up so I’m just trying to stay strong,” Nkanga said. “The times get faster and the marks get further for everybody so you have to step up and really be there with everybody else. Last year I qualified for nationals indoor, but I didn’t qualify for nationals outdoor so it really taught me that you have to keep going and you can’t get too tired for the outdoor season. So just stay strong and keep up and hopefully I’ll be an All-American again for outdoor and have more impressive results to come.”

A version of this article was published in the Monday, March 26 print edition. Contact Warner Radliff at [email protected]