Staff Recs: Best Shows to Binge on a Snow Day 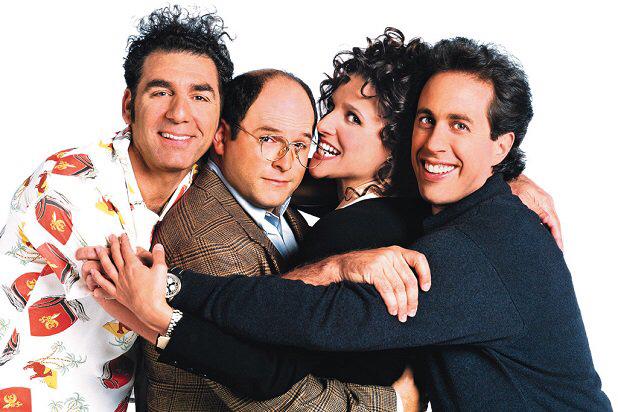 The cast of "Seinfeld".

Here at NYU, students and faculty were treated to a snow day on Wednesday and for many, at the peak of midterms season. Some of us braved the icy weather for a hard’s day work in Elmer Holmes Bobst Library, but most of us spent the blessed day behind a screen and in the sheets. Whether summer lethargy or winter blizzards are responsible for your next binge-watching stint, WSN is here with a few of our favorite television shows that are perfect for a sitting or two.

Although I didn’t binge watch any shows this past snow day, Netflix’s “American Vandal” is a must-see if you’re into crime dramas or dick jokes, two of my favorite things. I think I even skipped a class last semester to finish the eight-episode first season. First things first, Jimmy Tatro, who started on YouTube, has a weirdly calming voice — somewhere between the voice of a man who smokes two packs a day and actor/grey fox Dermot Mulroney’s voice. Maybe it’s just me. It’s probably just me. Second, you should know this is a crime mockumentary, but every actor keeps a straight face while talking about the vandal who’s been spray-painting dicks on cars in school parking lots. It’s a cinematic masterpiece, and Netflix just renewed it for a second season. So NYU bring on the snow days, or else I might have to skip another class for this one.

Because I can only watch “Black Mirror” so many times, the only show that has struck me lately is “Devilman Crybaby” –– a Netflix anime that serves as a reboot for the original and frightful anime, “Devilman.” The animation has a wild, unfinished aesthetic that nauseates as guts and blood flash across the screen. It follows young Akira, in the typical story of nerd-turned-superhuman, as he fights off the most creative-looking beasts I have ever seen. Be warned, the show flexes some serious gristle and gore — and not to mention, a lot of sex. I’m not going to lie, it’s totally a part of the appeal. So, if you have a fetish for utter destruction, you’ll be done with the first season in less time it takes to karate chop a half-headed dog-dragon.

Although “Gossip Girl” wasn’t the only reason I chose to come to NYU, it did have more sway than I’d be willing to admit. Everything about the show’s group of teenage trust-fund protagonists and their Upper East Side playground entranced me: the fashion, the exuberant wealth and the ever-escalating drama that seemed to come in a package deal with New York life. Watching from my home in England, after my parents announced our move to the United States, “Gossip Girl” was one of my first tastes of American culture. It’s certainly not an accurate depiction of many students’ lives — certainly not my own — but the show’s over-the-top plot lines and frequent NYU cameos make it a must-watch for anyone trapped by the snow with only a Netflix subscription to protect them from the storm.

“The Great British Baking Show” is by far the best Netflix series to binge watch on a cold snowy day because you can turn the show into a high-stakes game. This show is best watched with friends, however you can also watch it alone for a good time. The object of the game is to select which baker will win in the end, kind of like you would with a horse race. After the first episode, you and your friends make your picks for who is the best baker. Then, you simply watch the intense battle for the next great baker. To switch it up, you could even try to make something you see on the show! Have fun, and as the hosts of the show say, “Ready, set, bake!”

I was unimpressed when “Friends” came to Netflix, despite the majority of my friends freaking out about it as “Seinfeld” is clearly the superior of the ’90s sitcoms. “Seinfeld’s” monolithic nine-season run is perfect for any occasion — neither rain nor sleet can ruin your day so long as the show about nothing is on. You like slap bass? You like topical ‘90s references? There’s even an episode that references this very publication — “The Outing,” Season 4, Episode 7. The best part is that you can binge watch it both chronologically and out of order. Of course …

“This has got to be a mockumentary, right?” I asked my friend Cameron upon my first viewing of the Netflix docuseries. “Wild Wild Country” follows the outrageous and widely unknown ’80s Rajneesh cult — potentially a religion and somewhat a movement — and their leader, Osho. The cult — known as “Orange People” for their monochromatic, red uniforms — made waves in the early ’80s for their large following and even greater irreverence. Founded in India by Osho, or Bhagwan Shree Rajneesh, the cult focused on the unbridled celebration of life, but in a totally insane way. In “Wild Wild Country,” we see the cult transform a small Oregon town into the movement’s mecca Rajneeshpuram. Acres of farmland are turned into fields of completely sober Rajneeshees prancing about in red and crying at the sight of their Osho. Home footage from Oregon locals and interviews with original members and Secretary Ma Anand Sheela makes for an enthralling viewing experience and snapshot into a unknown chapter in history that we should be talking about more.