A Woman’s Place Is at the Top 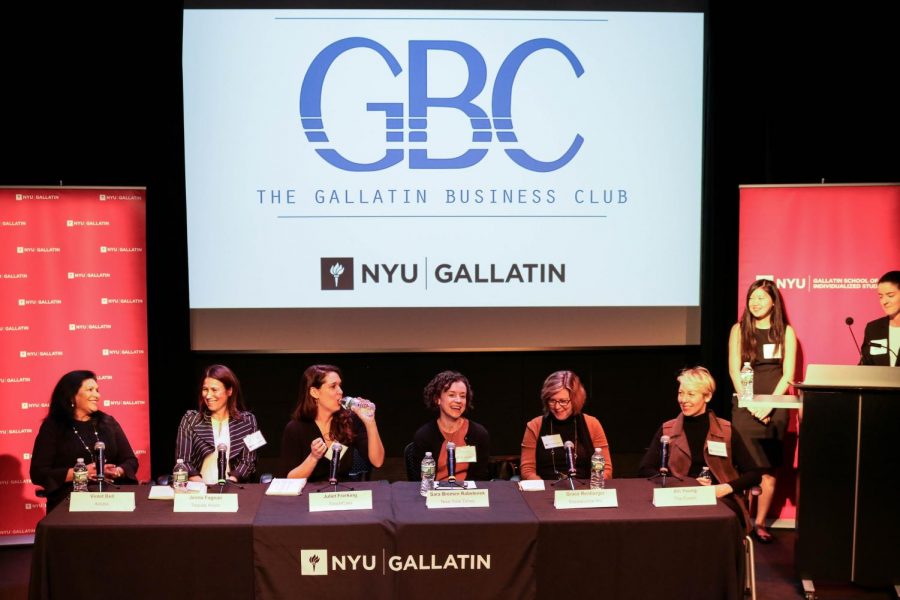 Although it seems that women are becoming more equal to men, the number of female CEOs has declined from its already paltry numbers. Last year, female CEOs made up only five percent of Standard & Poor’s 500 company list. Last month, Gallatin alumna Karina Altamirano gathered six women — many from industry-leading companies — and young women from NYU and Columbia University to discuss women in leadership roles and gender bias against women in the workplace.

After tons of awkward and daunting panels and recruitment events, Altamirano carved out a space to connect powerful, professional women with up-and-coming undergraduate, and even graduate, women. In an effort to encourage more women to take on leadership roles, Altamirano believes that when young women see and hear from women succeeding in higher levels of the business world, they can better envision their future in similar roles, considering many companies have an array of older white males in executive positions. Essentially, representation matters.

“When I was at NYU, I went to tons of internship panels and just panels in general,” Altamirano said. “It wasn’t until the end of my senior year that I had gone to an event where I met a woman from EY [Ernst & Young]. We connected immediately, and she gave me her email to meet up again. After that, I landed a job there even though I didn’t have too many internships on my resume.”

Currently, Altamirano works in transfer pricing at EY, one of the “Big Four” accounting firms. She started working there immediately after graduating with a concentration in “International Business” and traveling abroad for three of her semesters at NYU — the reason she chose Gallatin School of Individualized Study over Stern School of Business. For the past year and a half, Altamirano’s passion project has been the Women’s Professional Leadership Network, which worked in conjunction with the Gallatin Business Club for this event. The WPLN works to connect young women with women in the workforce who are succeeding in their respective fields all while balancing their personal lives.

Altamirano worked closely with Vice President of the GBC and Gallatin junior Ma Qing to host the Women’s Professional Leadership Panel since the two know each other from their ongoing partnership for the NYU Stern $300K Entrepreneurs Challenge — for which they’re now semi-finalists. The two women are one of the two teams from Gallatin among the other teams, primarily from Stern.

“Karina and I first met through the $300K Challenge,” Qing said. “She told me about this panel she had done last year and wanted to hold another one at NYU. We got sponsorship by NYU and Gallatin to host the event, but Karina had found all the panelists through her connections. It seemed like a great opportunity to meet like-minded people and successful, inspirational women.”

Panelists included Violet Bell, a senior executive at Adobe; Jenna Fagnan, the president of Tequila Avión; Juliet Frerking, the senior vice president of Operations at TouchCare; Sara Bremen Rabstenek, a product director at The New York Times; Grace Fisher Renbarger, the vice president and chief ethics and compliance officer for Bazaarvoice, Inc.; and Allison Young, the founder and CEO of The Forem.

Over the past year, Young left her job at Turn, a marketing and advertising agency, and before that, Young was at Google heading its media platform sales. She left to start The Forem, an organization focused on women in the workforce, and provide women with the tools that level the playing field against men going after the same jobs. The Forem offers programs suited to help graduates, women who are changing careers and those just looking to move up further in their respective fields.

“I realized women — many just entering the workforce or those changing their career path — don’t know how to ask for the things they deserve,” Young said in a phone interview with WSN. “I wanted to help these women feel more confident in going after that next job promotion or salary negotiation. The Forem is designed to give women that one-on-one advice and further instill confidence when going into those aforementioned talks.”

During the panel, Young mentioned from her research for The Forem that men can walk into an interview feeling 60 percent qualified for the job whereas women need at least 90 percent certainty. This unconscious bias psyches women out even before they can consider applying to certain jobs.

“We all hold our own gender biases and furthermore our own unconscious bias, where we practically single ourselves even before giving ourselves a chance,” Young said during the panel. “As women, we tell ourselves that we’re not qualified for the job even before we look at our competitors, who are often men that we’ve been conditioned to think are better suited than [us].”

Bell spoke with bravado and little mercy during the panel, firing back responses such as, “If you don’t feel respected at your workplace, leave it,” to which many of the other panelists said wasn’t a viable option for women who are in need of the income, especially at many of their first jobs. In an interview with Bell over the phone, she discussed her childhood growing up in South America and how  that influenced her current work ethic.

“My father raised me to be somewhat ‘no gender,’” Bell said. “He didn’t constrict me to the conventions of what we think it means to be a woman yet alone a man. I’ve carried the same mindset into the workplace. When I was at my former job at Max Factor Canada, I had picked up how to code and asked one of my male bosses if I could start working on more tech-related work to which he replied ‘no’ with little explanation. Later, I found out from another colleague that my boss thought my heels would click too loud over the tech grates. To which, his wife immediately replied, ‘That’s sexist. Now give her the job.’”

Frerking, who works at a healthcare startup, went to Stanford University for International Relations and Arabic. She never stepped foot in the healthcare realm but came to find her place quickly.

“I never thought I’d end up here, and like Allison said before, us women think we have to have all the skill sets going into our next job,” Frerking said. “In all honesty, if you have the foundational requirements, confidence and the will to learn, you can easily pick up the parts of the job you’re not so familiar with — like I did with healthcare.”

Our interview transformed into a conversation about her passions outside of work since she can’t always have her mind on the corporate world. Frerking told me about her love of cooking and traveling and how young people, like myself, miss out on their free time, preoccupied by getting the perfect internship that really won’t matter when they’re in their mid-30s.

Many attendees of the panel spoke with the panelists following the hour-and-a-half long panel to discuss their personal goals, ask further questions and hopefully walk away with an email address or another connection on LinkedIn. As a panel veteran, I noticed many of the young women going in groups — much like a trip to the bathroom — to speak to these seemingly powerful women and to avoid awkward silence.

“I didn’t get to talk to as many of the panelists as I would have liked,” Qing said. “I wanted to make sure all the other girls had a chance since I already met many of the women before the panel and can easily contact them afterwards. I’ve learned that as long as you’re genuine and not too pushy, you can try to ask anyone out for coffee and just wait and see what happens.”

I told Frerking as a journalist, I often walk a thin line between asking questions for my own personal interests and for articles — much like this one. I referred to our four-person management team, comprised of three women and one man, and how we each approach interviews. My conversations lately had been on the basis of mutual benefit that I couldn’t seem to escape, so I looked to Frerking for advice. She looked at me and said, “You’re welcome to ask any questions that you personally want the answers to, but I can almost guarantee your male colleague would have never asked me that nor would have ever worried about such a thing.”