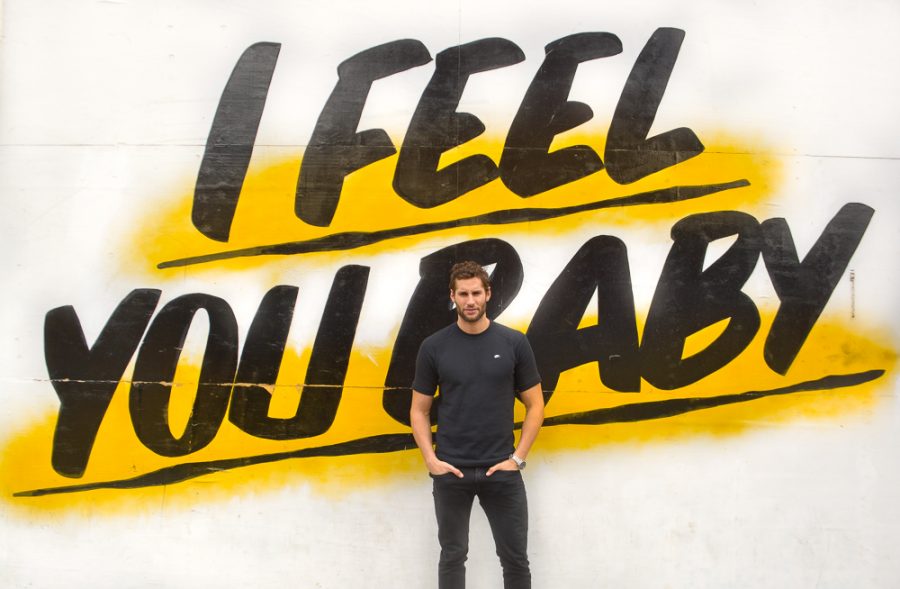 Chef Franco Noriega outside his restaurant, Baby Brasa in West Village in front of a mural that is part of his art collective “The New Allen.”

The start of a new series, Chef, welcomes an impressive profile on the talented Franco Noriega.

Swimmer. Model. Chef. Entrepreneur. Singer. Is there anything the multi-faceted Peruvian Franco Noriega can’t do?

Noriega rocketed to fame after a video of him in his underwear preparing chia pudding went viral to the point that Ellen DeGeneres called him as a guest of her show. But The Ellen Show wasn’t the first ones to notice Noriega. Soon after he moved from Peru to New York in 2007 to study acting, he was scouted by Dolce & Gabbana.

His modeling career took off after that, but during his sixth year in America, Noriega felt as though he was already reaching the ceiling.

“I came out of fashion,” Noriega said. “I was tired of that world, looking for something new, so I said: why not studying culinary arts?”

The idea didn’t come out of nowhere. Back in Peru, Noriega’s parents are owners of several restaurants — so he grew up surrounded by people in the food business. He enrolled in New York’s International Culinary Center in 2014 and opening a restaurant after graduating seemed to be his inevitable path.

“It felt very natural to me, going back to my roots,” Noriega said.

Peru has been named “World’s Leading Culinary Destination of 2017” for the sixth year in a row by the World Travel Awards, and its cuisine has become increasingly popular worldwide. Despite the rising number of Peruvian restaurants in New York, Noriega claims that his rotisserie Baby Brasa is unique because it has a healthy twist that the competition doesn’t offer.

“We are a 100 percent organic,” Noriega said. “It definitely makes the food taste much fresher.”

Peruvian food is characterized by its diversity and foreign influences, something that Noriega embraces strongly. His favorite ingredient is rice, not only because it is present in most traditional Peruvian dishes, but also due to its versatility. As he opened his restaurant in New York, he felt introducing American elements into his cooking style would happen naturally.

“Once you get to America, you Americanize everything unconsciously because you are adapting to a new culture,” Noriega said.

Such is the case of the Baby Brasa Burger featured on the Sunday brunch menu, which might not be traditionally Peruvian, but something Noriega made his own by giving it a Peruvian touch. However, he also tries to maintain authentic Peruvian recipes like Ceviche, Lomo Saltado and the restaurant’s signature Rotisserie Chicken.

As a social media addict, the chef admits he isn’t only worried about the taste of his plates, but also their appearance.

“Sometimes I’m in the kitchen, seeing all these plates coming out, and I take pictures of them because they look so delicious,” Noriega said.

Noriega believes those are the pretty pictures that attract new customers to Baby Brasa. He has tried to make his restaurant aesthetically pleasing, making it the perfect setting for unforgettable Instagram stories.

Noriega has recently taken another turn in his career by entering the music field, producing a single in collaboration with the Mexican singer Thalia. However, by no means is he distancing himself from the kitchen. He is working on setting up a new Baby Brasa in Hell’s Kitchen, while eyeing several neighborhoods in New York, Los Angeles and Miami. His most ambitious goal is to expand his business overseas to London.

With an already impressive and successful entrance into the culinary world, the only question that remains is what talent will Franco Noriega surprise us with next.