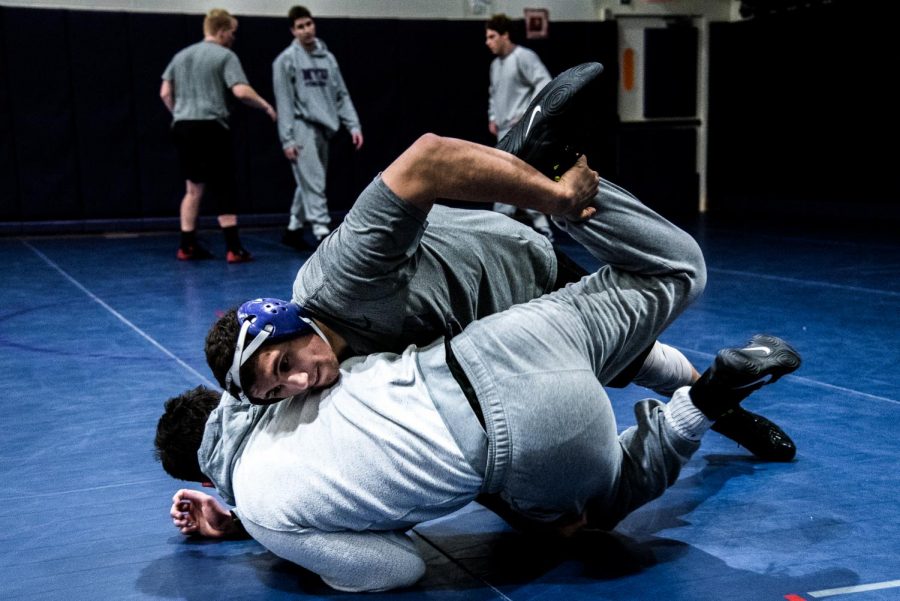 The wrestling team is coming off a strong season, and will look to continue its tradition of success this year.

The women’s basketball team completed its regular season with a win against Brandeis University Judges on Saturday, Feb. 24. The Violets were trailing the Judges 52-53 when senior Kayla Patterson finished a basket with 1.3 seconds left in the game, bringing the team to a 54-53 finish.

This game also marked the 100th win for Head Coach Lauren Hall-Gregory. The Violets will return to the court for the Eastern Collegiate Athletic Conference regional championships, though the schedule of the tournament is undetermined.

Men’s basketball suffered a loss to Brandeis in the team’s final game of the season on Saturday, Feb. 24.

The Judges led a majority of the game, with the final score being 59-97. The Violets’ overall season record now finishes as 10-14.

The highlights of the weekend included Tandon  junior Justina Sanders-Schifano earning first place in the 400m sprint, which also set an NYU record. Also CAS sophomore Evelyn Nkanga earned first place for the second year in a row for the triple jump. Her final distance was 11.76m.

The Violets will return on Friday, March 2 to compete in the All-Atlantic Conference Meet in Ithaca, NY.

The Violets will return on Friday, March 2 to compete in the All-Atlantic Conference Meet in Ithaca, NY.

Women’s swimming and diving hosted the NYU Last Chance invitational on Saturday, Feb. 24. The event was an opportunity for swimmers to make the qualifying times for the upcoming national championships.

Four women’s team members posted times for the event. The Violets will compete again at Middlebury College on Friday, March 2.

Six men competed at the meet and posted top times. The Violets will compete again at Middlebury College on Friday, March 2.

The Violets competed in the 2018 Division III Northeast Regional Championship this weekend hosted by Worcester Polytechnic Institute in Worcester, MA.

The NCAA championship will take place on Friday, March 9 at the Quicken Loans Arena in Cleveland, OH.

A version of this article appeared in the Monday, Feb. 26 print edition. Email Maddie Howard at [email protected]