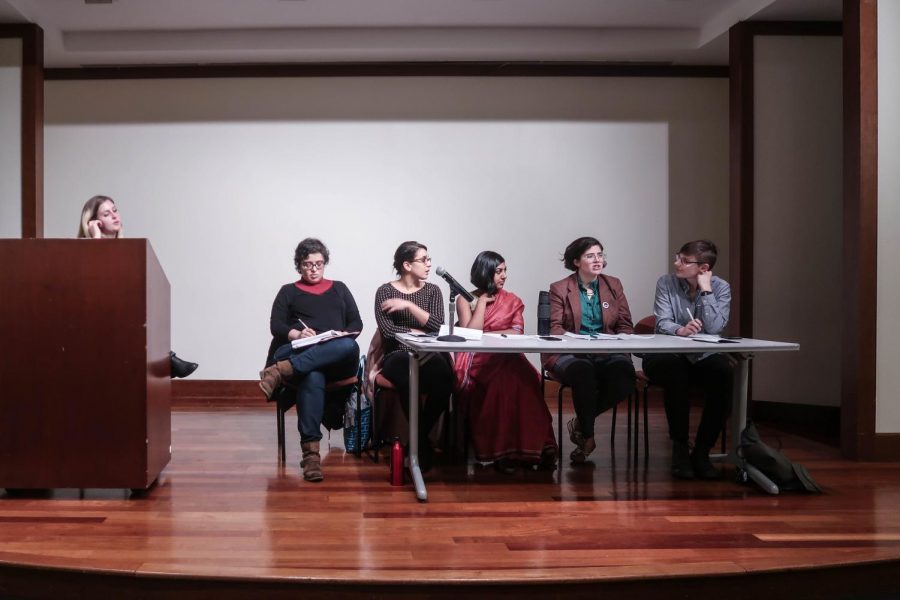 The panel at the event held by GSOC discussing debate and action surrounding Title IX.

On Feb. 20, the Graduate Student Organizing Committee held a discussion on the eighth floor of the Kimmel Center for University Life on Gendered Harassment and Higher Education. The event was lead by a panel of six graduate students who spoke about Title IX — a federal law that prohibits exclusion or discrimination based on sex — and sexual assault in universities. The students were chosen to speak based on their expertise on each topic discussed.

Despite a meager attendance of less than 20 students and faculty members, those present offered engaging comments and thoughtful questions about the subjects tackled by panelists. Pamphlets were handed out that shared some experiences of sexual assault survivors and information about student rights under Title IX were distributed to the audience.

Anne Palek, a fourth-year doctoral candidate in Steinhardt’s department of Media, Culture and Communications who helped lead the event, has been involved with GSOC for over three years.

“We thought that we [GSOC] should, as a union, get together to see what extent [sexual harassment] is a problem at NYU,” Palek said during a phone interview with WSN talking about the event’s conception. “But in the process of doing this we discovered that there were a range of issues and these were very, very broad.”

The discussion, while rooted in sexual harassment, also covered topics such as the complexity of Title IX, power struggles within academia, parental leave issues and work GSOC is doing to campaign for workers’ rights.

Panelist Jackie Cruz, a fourth-year doctorate student in the sociology department, focused on Title IX during the event, as this is the topic of her dissertation.

“When you look at Title IX there is this spectrum of behavior that is occurring,” Cruz said. “If universities aren’t addressing secual violence at the highest spectrum, they are not going to be addressing it in terms of like a professor making a small remark.”

Cruz emphasized that while she believes Title IX is important and must be protected, there are limitations to its influence based on how it is implemented by colleagues at NYU. She also emphasized that Title IX disproportionately affects women, a point she said is often lost in discussions around this piece of legislation.

Eliza Brown, who is in her third year of doctoral study with the sociology department, spoke about the prevalence of discrimination against graduate students who are parents. As of Jan. 1, New York instituted a new family leave law that is the most comprehensive in the country. According to Brown, NYU is applying this law in very narrow circumstances, meaning many working graduate students are not being given their state-protected right to family leave.

“NYU only affords five days of maternity leave to its graduate workers, which is the amount of time that you provide to an animal,” Brown said during the event. “So many of these issues are about cultural change, they are about perpetrators, they’re not things that can necessarily be changed just by implementing a law, [but] in this case it really would just be about implementing the law.”

Moving forward, GSOC is focused on several initiatives, including a rally and hour-long strike on March 8, International Women’s Day. In addition they are campaigning to have their letter of best practices read at meetings in every NYU Department.

The best practices emphasized by GSOC are aimed toward professors to remind them that making sexual advances or sexual jokes, touching, commenting on a student’s appearance or parental decisions, discrimination based on gender and use of inappropriate pronouns are unacceptable forms of behavior in academic settings.

“We want at least all professors to hear once a year … that it’s not okay to touch your students,” Palek said. “It’s unfortunate that this needs to be emphasized, but from what we’ve heard from students organizing around campus, it does.”