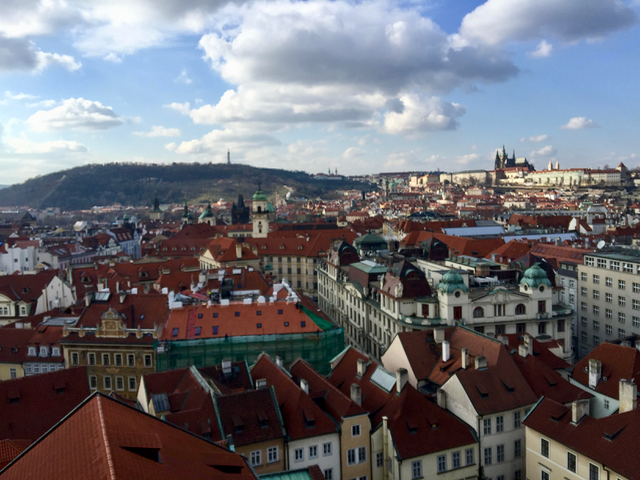 The skyline of Prague.

As I travel through Prague, I am the only non-white person on the tram — the Czech version of our MTA. I’m not used to that. Being from Northern California and going to school in New York City, I’ve never really had to be that one Asian person, a sore thumb sticking out from the rest.

It’s in places like this, unfamiliar and where I’m totally out of my element, that I find myself grasping onto tradition and culture, like the Lunar New Year, all the more firmly. Steinhardt sophomore Candice Shen said that when she was at home in Shanghai, tradition felt less important to her than when she was abroad, either studying in New York or here in Prague.

“When I was home I felt like it wasn’t important; I can celebrate but it doesn’t really matter to me,” Shen said. “When I go abroad I felt like there’s something wrong with me if I don’t celebrate. I feel weird [about not celebrating], maybe I just miss home.”

For Stern sophomore Brian Seam, moving away from home also changed his perception of the holiday. At home, Seam said his family makes traditional food and practices a Cambodian tradition of prayer to the ancestors. Even though he can no longer celebrate in that traditional way, Seam said it was still important for him to celebrate the holiday.

“I want to do it just to know that I’m still doing it, that I haven’t stopped,” Seam said. “Just a personal fulfillment sort of thing.”

I feel similarly to both Shen and Seam. When I was at home, the Lunar New Year was just another holiday to host a party for, the same as Christmas or New Year’s Eve. When I moved to New York, where I didn’t have the familiarity of family but still had a strong community that shared in those traditions, I felt I had to celebrate the holiday just to know I was still connected to my heritage.

And here in Prague, with nothing much to tether me to home beyond my phone and erratic texts with my family over WeChat — the nine-hour time difference is sometimes too difficult to tackle — my desire to celebrate this holiday is anchored to my desire for something familiar.

My family and I celebrate the Lunar New Year with a hot pot dinner and a gathering of family friends. I remember the holidays I spent at home as times of raucous celebration and staying up as late as possible, symbolic Chinese foods and red envelopes.

Rice University junior Christine Lo, studying at NYU Prague this semester, also looks back on celebrations with her family fondly. Her parents live in Taiwan, and she said celebrating the Lunar New Year meant reconnecting with her relatives.

“I get to see my cousins,” Lo said. “I have 13 cousins on my dad’s side and I’m really close to all six of my cousins on my mom’s side; I basically grew up with them. So [Lunar New Year] has kept our families together and kept us close.”

This year, the Lunar New Year is on Feb. 16. I will be traveling to Brussels, but even if I had wanted to, it would have been difficult to celebrate in the way I am used to in Prague — for the simple reason that there is not much that is familiar here. According to a 2013 survey by the Czech Statistical Office, 5,508 Chinese people live in the Czech Republic. (There’s a bigger minority of Vietnamese people in the country — 57,000, though that’s still less than one percent of the country’s population.) Though there are some Chinese restaurants around Prague, I haven’t quite found one that feels the same.

Still, for me, and for Shen, Seam and Lo, celebrations are still on. Just different and, perhaps, quieter.