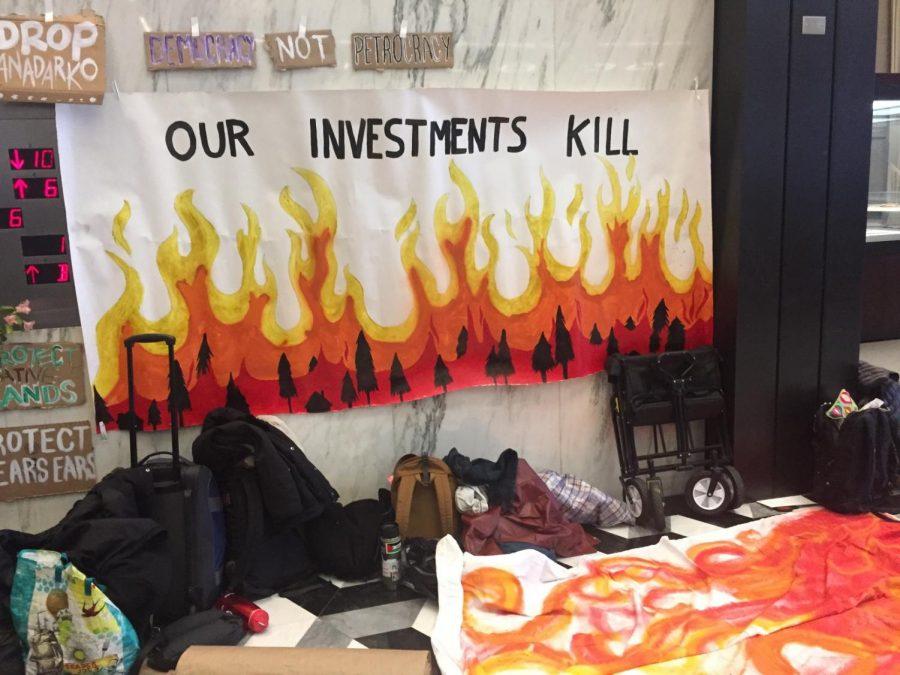 NYU Divest and NYU SLAM attempted conversations with some members of the Board of Trustees with limited success.

Members of NYU Divest and the Student Labor Action Movement occupied exits of the Kimmel Center for University Life to track down trustees following Tuesday’s Board of Trustees meetings. The organizations documented the majority of Wednesday’s efforts on an Instagram Live video, which was posted on NYU Divest’s Instagram account.

At the conclusion of the meeting, a group of Divest and SLAM members attempted to enter the ninth floor of Kimmel, where the trustees met, through the building’s staircase. According to a joint press release published by the groups, they were denied access on three separate occasions. Due to its inability to access the meeting, the group split up and occupied Kimmel’s exits, where members waited for trustees to leave the building.

One group confronted billionaire trustee and NYU Stern alumnus John Paulson as he attempted to leave the building. The group asked Paulson if he was aware of the groups’ campaigns. According to the press release, Paulson affirmed that he was aware of their efforts, and said he felt that their demands are thoughtful.

Another group of organizers encountered Chair of the Board of Trustees William Berkley but were unable to engage in a conversation with him.

The group feels the trustees, in general, attempted to avoid confrontation and evade questioning when confronted by Divest and SLAM. Divest’s Instagram account and the press release recount multiple instances in which trustees attempted to avoid the groups and to covertly leave the building through discreet exits.

“We remain astounded and confused at the fear the world’s most powerful financial figures have shown when faced with a small group of students asking for transparency and accountability,” the press release read. “Their persistent evasiveness and elusion crosses into absurdity and only leads us to suspect there is something they do not wish for students to know about.”

“Students do have access to the Board, in ways both formal and less formal,” Beckman said, citing several instances in which students have previously been able to engage with trustees. “As to NYU Divest specifically, it seems worth noting that they did meet with Trustees as well as senior university officials on several occasions as the Board was proceeding with its deliberations about divestment last year.”

NYU Amnesty International, a student organization, told Divest and SLAM that its pre-planned meeting earlier in that day had been affected by the concurrent Board of Trustees meeting. According to the press release, Amnesty International was allowed to remain in its reserved room, but members had to be escorted off of the floor by campus security upon departing. Amnesty International has not responded to WSN’s request for comment.

“[The actions resulted in] a somewhat improved understanding of Board-student relations for us, and hopefully for the NYU community as a whole,” Shoshana said.

SLAM member Hannah Fullerton said the trustees were fostering an unhealthy relationship between themselves and students.

“What was most evident from our interaction with the trustees last night is the lengths our administration is willing to go to order to keep students and trustees separate,” Fullerton said. “We envision a very different relationship between trustees and students, one marked by transparency and dialogue rather than avoidance and fear.”