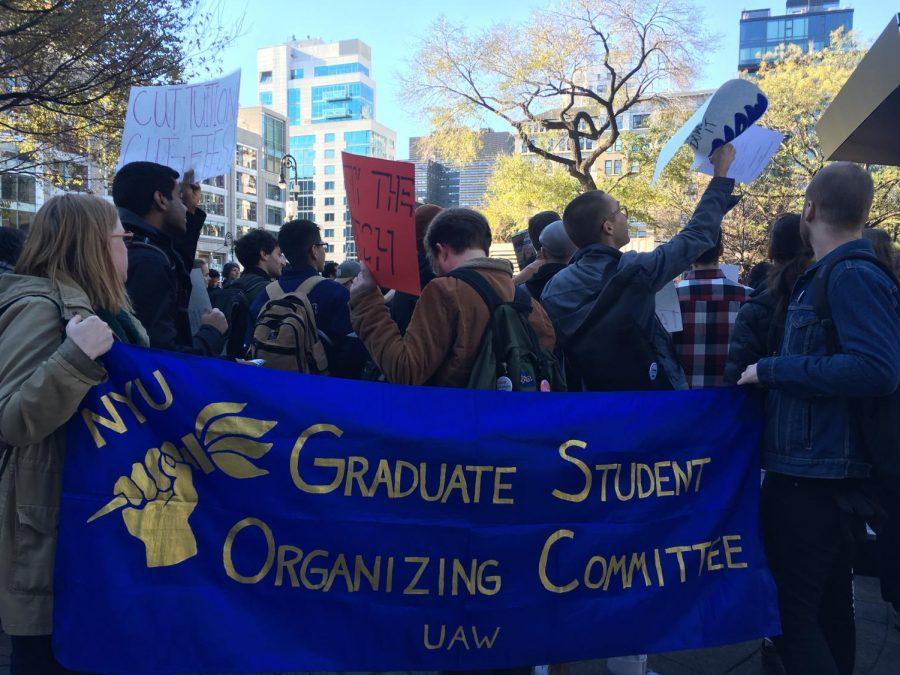 On Wednesday, Union Square Park was occupied by approximately 100 graduate and Ph.D. students from various New York City universities protesting the proposed Grand Old Party tax reform bill that would allow graduate students to be taxed on university tuition waivers, among other things.

The House tax plan would impact approximately 145,000 graduate students across the country who currently receive non-taxed tuition waivers by adding the value of these waivers to the students’ taxable income. Tuition waivers are grants given by a university which reduce or eliminate tuition and other university charges.

For NYU Ph.D. candidate and teaching assistant Ella Wind, her $40,000 tuition waiver added to her taxable income would increase her taxes by around $6,000.

“This would mean a lot of graduate students would have to dropout of university, unless they have wealthy parents or a wealthy spouse that can support them,” Wind said. “[The bill] would be absolutely devastating for higher education in this country. It would probably mean I would have to drop out.”

Representatives from NYU, the City University of New York, Rutgers University, Columbia University, The New School and Princeton University, located in New Jersey, attended the walkout with anti-GOP banners and raised fists. One graduate student even brought her toddler.

“If this bill passes, the university needs to take a really strong stance in making sure this doesn’t affect our incomes,” Wind said. “They need to compensate us for the amount of taxes we will be paying, and they need to promise us that they are going to do that — and they have not done that yet.”

Throughout Union Square, the crowd could be heard chanting, “Tax the rich, not the poor, you won’t have TAs no more.” The group got a few honks from passing cars.

“A lot of us can’t afford to pay tuition, or taxes on tuition, so a lot of us would be forced to drop out,” Clavijo said. “It’s sad because I love what I do and I want to keep doing it.”

Although the bill would not tax undergraduate students, Wind said the tax reform would still negatively impact them.

“I think that any NYU undergrad knows how much work TAs do,” Wind said. “We are sometimes more closely connected to your education than your professors. I would urge you to imagine what it would be like in a university if all the TAs suddenly disappeared because we couldn’t afford to continue graduate school.”