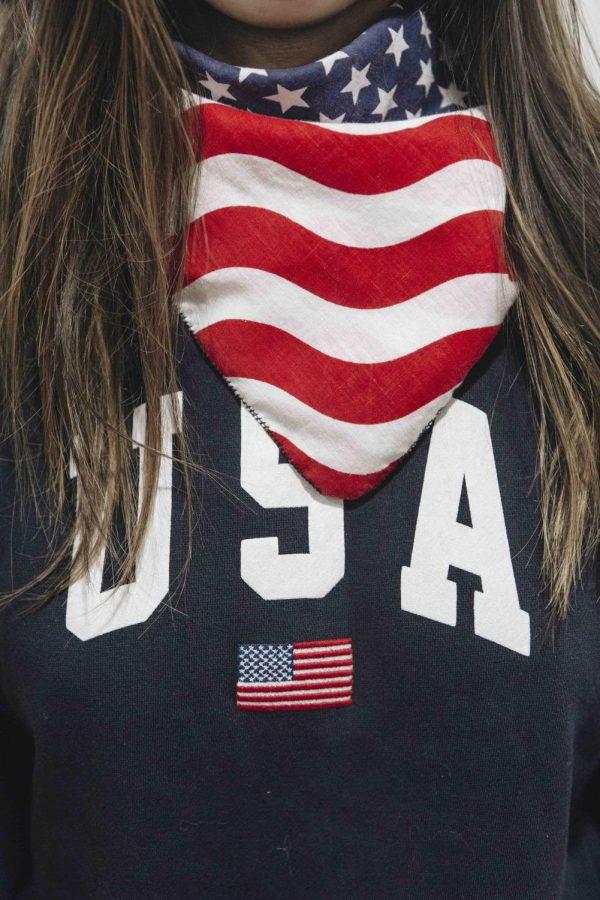 The U.S. flag has appeared on clothing as an icon or a print for decades, but is now being banned from appearing on apparel.

The U.S. flag is an enduring symbol of patriotism, especially among U.S. conservatives. It seems that with the recent kindling of U.S. nationalism and the development of the American so called “alt-right,” the U.S. flag is beginning to represent nationalist or even populist values for some Americans.

Some students around campus aren’t bothered by Lahren’s use of the flag since, in recent events, it hasn’t stood for the U.S. as a whole.

“The flag creates a national identity, but for some people it represents a partisan identity and excludes immigrants or the LGBTQ [community],” Steinhardt senior Amanda Morris said. “To me, the flag is for everyone, which is why I think there shouldn’t be one dictation on how you can use it.”

U.S. conservatives often take flag culture seriously, going so far as to defend the Confederate flag, but since the rise of President Donald Trump, the nationalism associated with the symbol has only become more intense.

NYU students don’t seem to mind so much the use of the flag as a fashion statement, more so the sentiment that the flag represents ideals which go beyond the basic principles of democracy.

“I guess it depends on who’s wearing it,” Tisch sophomore Bre Kelly said. “If I were to see an American flag at a Trump rally, I would find it really intimidating.”

Kelly also brought up the camouflage trend as an instance of utilizing military style in a trendy way, but she said she thinks some retailers like Brandy Melville and Urban Outfitters take the military style too far with mock patches and pins.

Students have a problem with the flag as apparel specifically in the context of Lahren’s hateful nationalist rhetoric. It seems that the flag at one point may have been acceptable as apparel, but with the divisiveness of the current political climate, it can operate as a tool to isolate people of different affiliations even further.

Tisch sophomore Madi Mitts said that the appropriateness of wearing the flag depends on who is wearing it.

“My dad is a veteran,” Mitts said. “So when people like Tomi Lahren wear the flag to be obnoxious, it’s not OK with me.”

A previous correction to this article spelled Madi Mitts’ name as Maddie Mitts. WSN apologizes for the error.

A previous version of this article stated that Maddie Mitts’ name was Maddie Williams. WSN apologizes for the error.

A version of this article appeared in the Monday, Nov. 20 print edition. Email Kate Holland at [email protected]