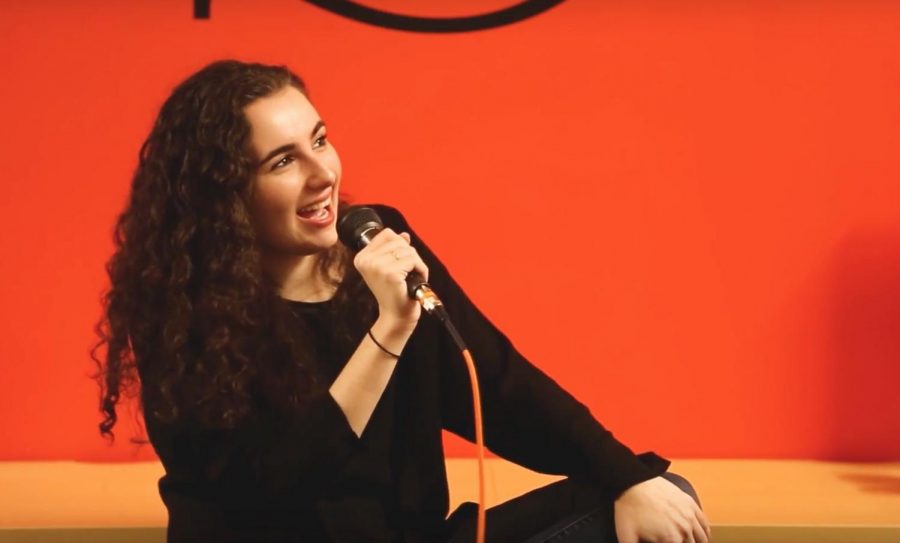 Gallatin junior Lexi Riesenberg is a budding singer-songwriter with a clear passion for her craft. On Nov. 10 the singer, whose stage name is Lexi Riese, gave a heartfelt performance for the WSN staff. Riese played a mix of original and covered music, hitting notes with ease and modulating her tone with deftness and dexterity.

Of particular note was “In or Out,” an original piece featuring her bittersweet vocals balanced harmoniously with the bouncing strum of an acoustic guitar. Her voice has an organic, natural quality that stood on its own throughout the performance. She exuded a balance of confidence and delicacy that is never easy to achieve.

After the performance, she sat down with WSN to discuss how she navigates the world of music. Riese studies Music and Identity in Gallatin, which she describes as the social and cultural context of music. This unique concentration plays a role in the way she makes her music.

“I think it affects my songwriting the most,” Riese said. “When you realize that all of these artists are not just putting out music, it’s more than that. They’re putting out a message and what they stand for and what they represent. When you’re aware of that, and you’re aware of how race plays into that, how gender plays into that and all those kinds of things, it really changes the way you make art.”

Riese went on to explain that she wasn’t afraid of taking influence from other musicians. However, finding originality has never been an issue for her — every musician draws inspiration from his or her favorite artists and she was no exception.

“I love Tori Kelly,” Riese said. “I think she has a great voice. I also really admire that she wrote and produced her first two EPs on her own. I think that’s really cool because a lot of the times we see singers who don’t know what goes into it other than the vocals. I appreciate that she has experience outside of that as well.”

Inspired by people like Kelly, Riese desires to develop a good understanding of the inner workings of song production.

“I don’t necessarily need to produce [a song] on my own, but I would like to understand what’s going on and have input,” Riese said.

Riese is from a suburb of Philadelphia, a place with a very different musical scene than New York. When asked about the transition to New York, she said she was ecstatic about the change in scenery.

“It’s amazing, the best,” Riese said. “Growing up in the suburbs, I didn’t think I could do music or that that was a possibility, but coming to New York you see so many people … doing it and having a great time. There’s just so much access to concerts. There’s a ton of open mics. There’s just every opportunity you could ever want.”

Riese hopes to record some new music and will continue to play at open mics and whatever gigs she can get. You can find her on Facebook and Youtube.

A version of this article appeared in the Monday, Nov. 20 print edition.