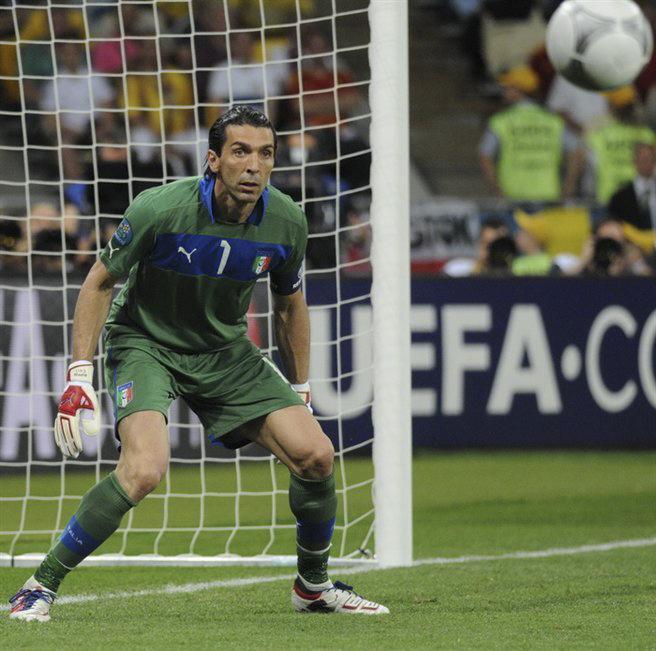 Gianluigi Buffon at the Euro 2012 finals in Kiev, Ukraine.

The final whistle blows. The Swedes go sprinting around the field, screaming shouts of joy, for they have miraculously qualified for the World Cup for the first time since 2006. On the other side of the field, the Italy players collapse on the ground, some stumble around dazed and others find comfort in each other. Then there’s Gianluigi Buffon — the man who has spent the last 20 years playing his heart out for the Italian national team and who has just completed his final match for the Azzurri. Stoic and as sportsmanlike as ever, it doesn’t appear to have hit him yet. He shakes hands with the Sweden players and tightly embraces his friend and compatriot, Giorgio Chiellini, who likely also just put on the blue Italian jersey for the last time. Later, during a post-match interview, Buffon becomes overwhelmed with emotion, and he breaks down in tears on camera.

Whether you are a supporter of the Italian national team, a fan of a different team or neutral, a piece of all our hearts break watching Buffon.

The words legend and “GOAT” (Greatest of All Time) get thrown around a lot these days, but some may argue strongly that Buffon certainly deserves a statue of himself somewhere in Italy. Born in Carrara, Tuscany, Buffon spent his youth playing for Parma before joining Juventus in 2001. He stayed with Juventus, even during its relegation, contributing to the club’s Serie B title and promotion back to Serie A in 2007. Later, Buffon played a key role in Juventus’ historic run, which saw the club win an Italian record of six consecutive league titles between 2011 and 2017. In total, he won a record eight Serie A titles, three Coppa Italia titles and five Supercoppa Italiana titles with Juventus. When describing Gianluigi Buffon, the words dedicated, passionate and fearless are just a few that come to mind. He has inspired and continues to inspire millions of football fans all over the world, with his love for the game and his utter class making him unforgettable in the minds of many and beloved in the hearts of all.

Italy failed to qualify for the World Cup for the first time since 1958. The 39-year-old Buffon fought hard, just as he has in every game he played for Gli Azzurri, making incredible saves and putting his body on the line for his country. It is truly the end of an era for Italian football and for Buffon. Where Italy will go from here, nobody knows. They must not forget this failure, how painful it feels to miss out on the world’s greatest football competition, but they must look forward and work hard to put together a stronger squad in the next World Cup cycle. For Buffon, his time with the national team has come to a premature end. He won’t get the hero’s goodbye he deserves in Russia this summer, but he can have no regrets. Now, he will go back to Turin and play out the rest of his professional career for Juventus, where perhaps he can lead them to their 28th Serie A title.

Buffon has broken multiple records in his career. With the Italy national team, he has been called up for an international record of five FIFA World Cup tournaments (1998, 2002, 2006, 2010 and 2014), he holds the record for the most clean sheets in Series A and with the Italy national team, and he is the most capped player in the history of Italian football, having just played his 175th international cap.

Whether he is the greatest Italian player or the best goalkeeper in the world is a debate that can be argued forever, but no one can say that Gigi Buffon isn’t one of the greatest men in football. As a fan of Azzurri for many years, thank you Gigi for your service, and I will dearly miss watching you between the sticks, defending the Italian goal with all your might.

A version of this article appeared in the Monday, Nov. 20 print edition. Email Bela Kirpalani at sports@nyunews.com.