Macklemore Is Back with ‘Gemini’ 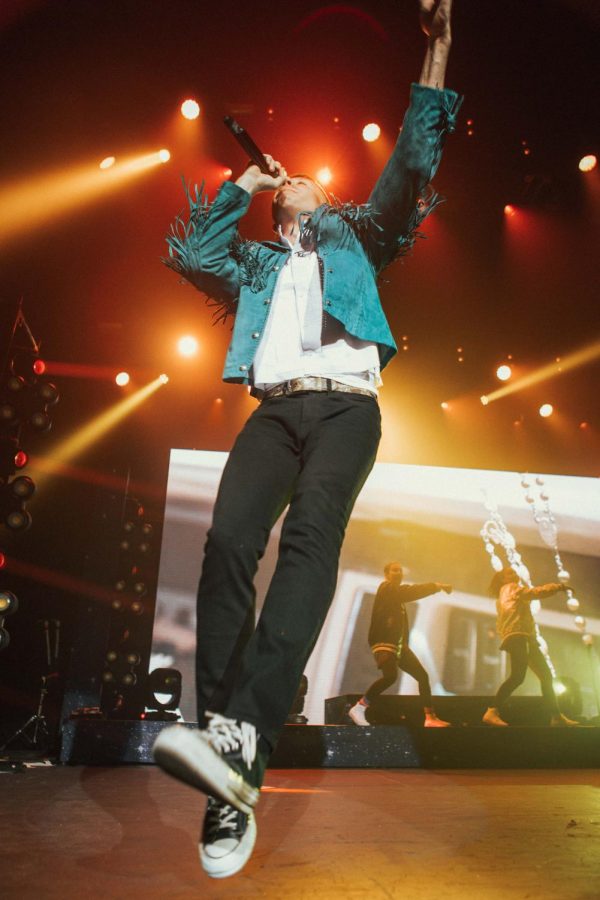 According to astrology, Geminis are expressive, versatile and are known to have a dual nature. Rapper Macklemore, who is a Gemini himself, embodied these traits at his sold-out “Gemini” tour show at Terminal 5 on Nov. 10.

Macklemore performed a range of his best-selling hip-hop music mixed with tracks from his album “Gemini,” which he released in late September. This latest release is his first solo album in 12 years without the guidance of his former creative partner and producer Ryan Lewis, who he’s worked with since 2006, and without the support of a major production company. Macklemore developed “Gemini” from a self-made studio in his Seattle home, bringing in well-known collaborators like Lil Yachty and Kesha while also supporting local talent like up-and-coming 20-year-old rapper Travis Thompson.

At the concert, Macklemore showed off this duality by mixing tracks from his new chart-topping album with songs from his Grammy-winning album “The Heist.” He even included a couple songs from his underperforming 2016 album “This Unruly Mess I’ve Made.” He kept the energy high, literally jumping three feet into the air to kick off his hit “Thrift Shop.” The show was full of movement from the rapper and from the audience. This was exemplified when he brought two people on stage for a dance-off, and by his set, which featured saturated clips that matched the tone of his music — scenes of Oompa Loompas played during “Willy Wonka.”

To balance out the hyped up songs, Macklemore grounded his performance by playing some more serious tracks. Known for tackling politics in his music, Macklemore took a moment to introduce his anthem of acceptance “Same Love” with a statement about how anyone is welcome at his concerts regardless of their skin color, sexual orientation or gender identity. Amid cheers from the crowd, he said that in today’s political climate, joining together to celebrate music is a way to peacefully resist the polarizing president.

Another resounding moment in the show was Macklemore’s acapella rendition of “Otherside.” Macklemore has been transparent about his struggle with addiction throughout his career and continues to express his challenges in his music. More than that, the raw verses spoken without any embellishments and only a spotlight on the performer boiled down the rhythm and rap to their roots in poetry.

Throughout the concert, Macklemore made various quick-changes to fit the tone of each song. The audience anticipated “Thrift Shop” when he shed his opening fringed leather jacket for a long fur coat. For “Willy Wonka” he whipped on a blazer and a top hat reminiscent of the movie character. During “Otherside,” he mirrored the stripped-down performance by wearing a wife beater.

His costume changes, enthusiastic performance and balanced line-up kept the audience engaged until the very end as he closed the show with the leading single “Glorious.” The song’s invincible spirit and message of leaving a legacy closed out the show on a high note. It was the return of the Mack, and maybe he’s back like he never left.