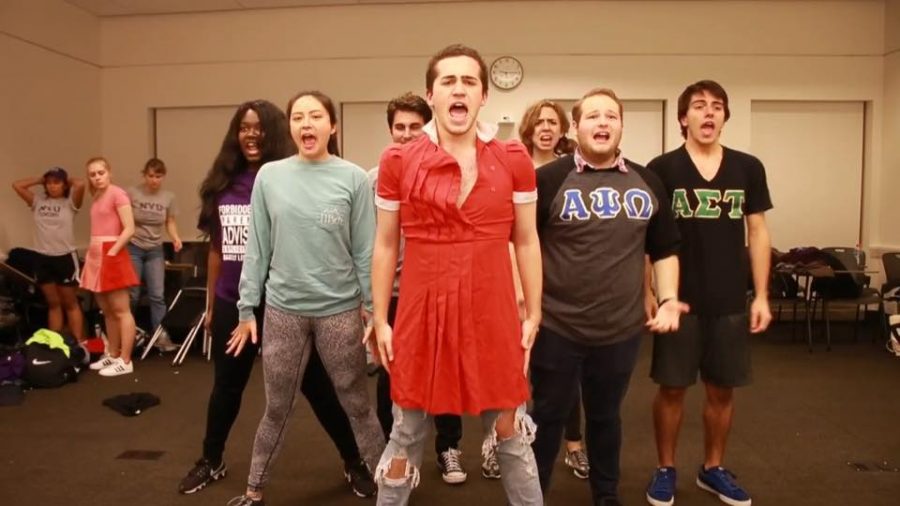 The College of Arts and Science Theatre presented “Forbidden NYU” Friday night, where performers sang classic Broadway hits, but with lyrics to fit all things NYU.

The College of Arts and Science Theatre presented “Forbidden NYU” Friday night, where performers sang classic Broadway hits, but with lyrics to fit all things NYU. They discussed the insane tuition, the cliques and the lack of straight men on campus. The show was two hours of pure laughter that every audience member can relate to in some way or another. The whole magic of the show comes from the relatability mixed with genius lyrics and insanely funny and entertaining performances.

In its 18th installment, Forbidden NYU debuted the barely legal edition where parental advisory was requested. Some highlights of the show included “One Gay More,” a spoof of “One Day More” from “Les Misérables,” where a group of girls laments the struggles of trying to find a straight boy at NYU. Another highlight was “FYRE Shock Tango,” a parody of “Cell Block Tango” from “Chicago,” where the performers relayed the not-so-glamorous aspects of the freshmen Residence Halls.

Co-director Jonah Foxman said that his favorite song the “Straight Guy Song” taken from “Carrying the Banner” from “Newsies,” where the actors make it seem that being a straight male at NYU is just as hard as being a woman or a gay male or any other marginalized community member.

Foxman directed this year’s show alongside Oscar Lopez, whose favorite part of the program was the community seen among the actors, which was evident during Friday night’s performance.

“It’s kind of amazing how much a thing this show has become in its 18 years at NYU, while still resulting in a quality production at the end,” Lopez said.

Although the show was goofy and silly by nature, raw talent was evident in every corner of the performance. With sets, a band and costumes, the performance was ironically serious — as serious as a show could be with a dozen shirtless men waving around pride flags and doing backflips. Fun was poked at every school and every single major. From the struggle to tap your ID when entering a dorm or the upperclassmen’s plight for leftover meal swipes, every audience member could leave laughing at every ridiculous aspect of this school.

More common themes were the lack of sports teams, the portrayal of Sternies as robots and the absolutely insane concentrations found at Gallatin. The show closed with “To NYU,” a parody of “La Vie Boheme” from “Rent” that focused on more of the positive aspects of going to school here. It was enough to make even the freshmen in the room nostalgic.

The songs from the show come from a wide range of students at NYU, so be on the lookout for how you can get involved for next year’s show. Submissions are collected between May and September, and then auditions are held. You could be an actor in the show or part of the creative team. It truly appears to be an amazing community of people who know how to have fun and make any audience laugh. Broadway buff or not, Forbidden NYU hits close to home in the best way possible that leaves the audience feeling mildly offended yet prouder than ever to be a Bobcat, or a Violet,  or whatever.

A version of this article appeared in the Monday, Nov. 13 print edition.