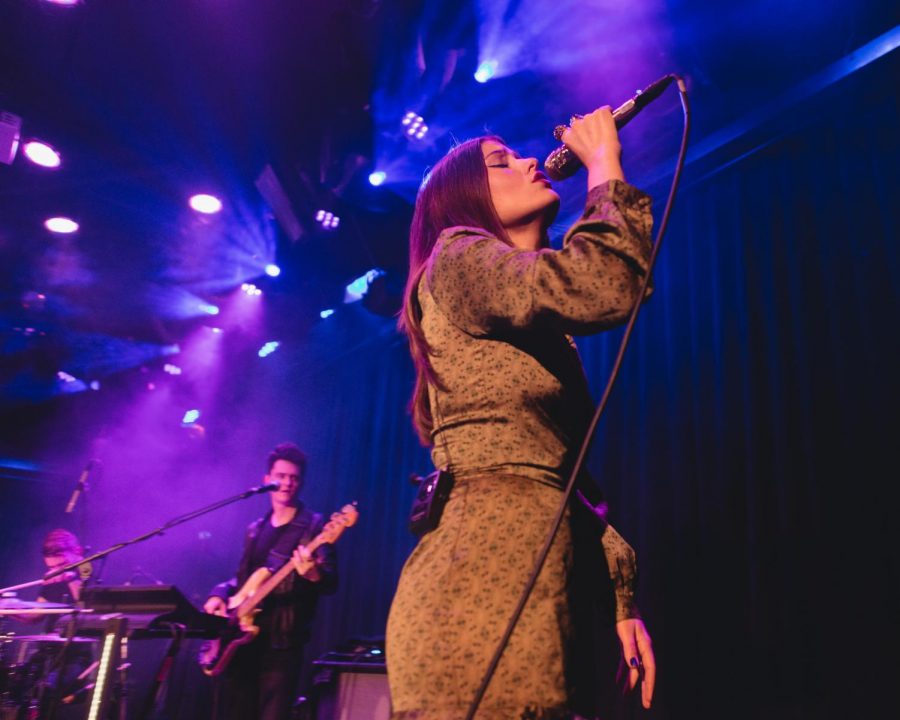 A great singer isn’t always a great performer, just as great performer isn’t always a great singer. Artists who can do both are the ones who last in today’s competitive music industry. If mastering these two skills is the key to being a good artist, then we can expect Swedish singer-songwriter LÉON to be around for a long time. LÉON danced barefoot across the stage at Le Poisson Rouge during her sold out show on Oct. 27, interacting with fans at every opportunity while also delivering solid vocals. With only her band and light-up letters spelling out her name in the background, the focus was all on her. Yet, it felt like there was no separation between her and the fans. They danced and sang in harmony with her, staring into her eyes and savoring every moment.

LÉON knows how to work an angle. Many times she’d lose herself in the music, turning her back to the crowd or only showing her profile. She would then immediately return to the audience, fully present and aware of the eyes on her as she moved back and forth from one end of the stage to the other, gesturing with her hands and entire body. She’s physical in the same way someone like Lorde is, while still remaining graceful and sultry. And as good as she was a performer, she was equally as good a vocalist. Her voice is soulful and expertly controlled — she uses vibrato with intention, smoothing out notes when the melody calls for it and easily flips from chest to a breathy head voice on tracks like “Sleep Deprived” and “Think About You.” Her voice just barely breaks in all the right places. These are all signs of a good storyteller; LÉON understands the message she’s trying to send and knows what musical techniques she has to use to convey it.

If there is one thing LÉON could still improve on, it might be the way her songs build. The choruses of them, especially live, did not feel fully developed — she sang a lot of them at the same volume with the same sort of emotional output. As a result, not enough emphasis was placed on the last chorus, the one where the crowd really wants to hear the singer let loose. Her opening act Wrabel, however, knew exactly how to let a song rise from start to finish. In his song “11 Blocks,” the up-and-coming pop artist started off lower, softer and slower in the verses, leading up to a hook in which his voice truly soars. He took us from having a casual conversation about heartbreak to crying out the pain of knowing someone you used to love is just 11 blocks down the street from where you are, all in just under four minutes.

There was some kind of palpable magic in this journey that LÉON’s set lacked. Perhaps part of the issue with her performance in this regard was that it was too controlled — the precision may have cost her that authentic rawness we expect to be unleashed, at least at the very end of a song. Whatever the case may be, there is no doubt that LÉON’s prospects of becoming the next big thing are looking quite good with the vocal and performance chops of a true professional.