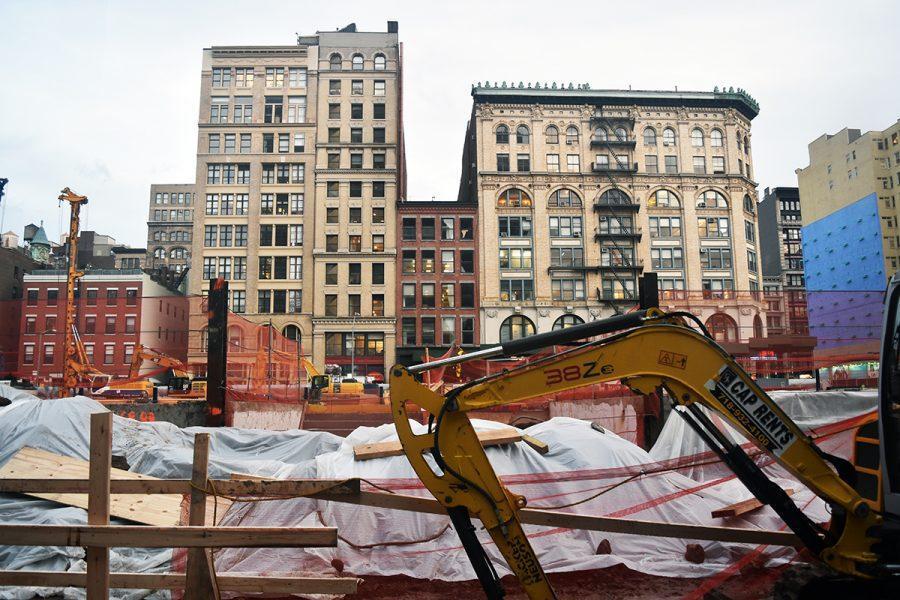 Several local Mercer Street residents have expressed concerns over recent NYU plans for 181 Mercer Street. They cite that the new proposals could impact air quality and amount of natural light surrounding their buildings.

Last year, NYU announced its $128 million structure at 181 Mercer St. that will replace the demolished Coles Sports Center. Ever since the project began, residents of 88 Bleecker St. and 200 Mercer St., as well as members of Community Board No. 2, have been speaking out against the university’s plans.

The building, which is set to open in 2021 as part of a 25-year redevelopment plan by NYU, will include athletic facilities, classrooms and housing for freshmen and faculty, among other amenities.

The latest wave of local opposition came in response to NYU’s newest modifications to its project.

The modifications, which were announced on Oct. 11, include the adjustment of dorm tower sizes, moving a dorm tower closer to Mercer Street, slanting the size of the tower to make the the sidewalk of West Houston Street wider and reconfiguring one section of the building to let in more natural light to buildings on Mercer Street and Bleecker Street.

Andy Amer, president of the Cooperative Board for 200 Mercer St., said to WSN that residents are concerned about the effect these modifications will have on the air quality and amount of natural light surrounding their buildings. Amer also said that these alterations go against a 2012 agreement reached between NYU and New York City councilmember Margaret Chin.

Amer said that as part of this agreement, NYU guaranteed the elimination of a proposed Tower B at the corner of Bleecker and Mercer Streets. The agreement also forced the height reduction of Towers C and D and guaranteed a certain amount of setback space between 200 Mercer and Tower C.

As a response to these modifications, Chin wrote a letter to Chairperson of the City Planning Commission Marisa Lago to encourage the commission to protect the wishes of the Bleeker Street and Mercer Street residents.

“While I appreciate the overall reduction in the bulk of the building, that reduction must not come at the expense of residents of 88 Bleecker St. and 200 Mercer St.,” Chin wrote. “I urge the City Planning Commission and New York University to work together to ensure that the refinement of the building’s design honors the agreement won by our community with NYU.”

“We reviewed these changes and determined that some of them are substantially compliant with the 2012 approvals,” Marvilli said. “Others are included in the minor mod application for the City Planning Commission’s further consideration.”

NYU spokesperson Matt Nagel says that NYU is working with Chin in response to her concerns expressed by residents of 88 Bleecker St. and 200 Mercer St.

Nagel said the project’s design team is considering design refinements to the northeast portion of the structure, including changes to a planned two-story elevator bulkhead that would sit at the base of the northernmost tower.

“The university instructed the design team to look into the council member’s request, and the architects have advised that the elevator bulkhead can be reduced by approximately one-third of its mass at its northeast corner by removing space planned for student activities,” Nagel said. “With this change, the eliminated portion of the bulkhead will become open space as part of the roof terrace.”

This is not the first time residents have expressed their concerns about the Mercer Street project.

Andy Amer, president of the Cooperative Board for 200 Mercer St., said to WSN he and other residents opposed the project before it was even approved, attending community board meetings and writing to State Senators, community board officials and the City Planning Commission.

Amer said that he thinks NYU has, in most cases, rejected appeals by residents calling for project alterations.

Amer said he went to a committee meeting two weeks ago that was also attended by NYU representatives, at which he and residents from 88 Bleecker voiced their complaints regarding the Mercer project. These complaints were not enough to change NYU’s agenda, according to Amer.

“The response from the NYU representatives was basically ‘we hear you but we’re not changing it. This is what we’re going with.'” Amer said. “So, you know, that was that. You know, they listened, but they’re not doing anything to change the current plan in response to our concerns.”

Residents from 88 Bleecker and members of Community Board No. 2 did not comment on the matter.

However, Nagel says that NYU has already made several adjustments to its project in accordance to residents’ complaints, citing the design alterations enforced by the 2012 agreement with Chin that reduced NYU’s building from an approved 930,000 gross square feet to 735,000 gross square feet.

Nagel added that NYU has also agreed to fulfill a series of commitments to the community.

“With the guidance of council member Chin, NYU agreed that in addition to the approved plan, NYU would fulfill a series of commitments to the community,” Nagel said. “These commitments include (but are not limited to) enhancing spaces for public use (the Bleecker Street Landscape and the LaGuardia Street Landscape) and supporting spaces for community use, such as making 6,000 square feet available in WSV 4 for a daycare and pre-K program managed by Creative Steps/University Settlement.”