The Front Bottoms Light Up the Stage in Their Home State 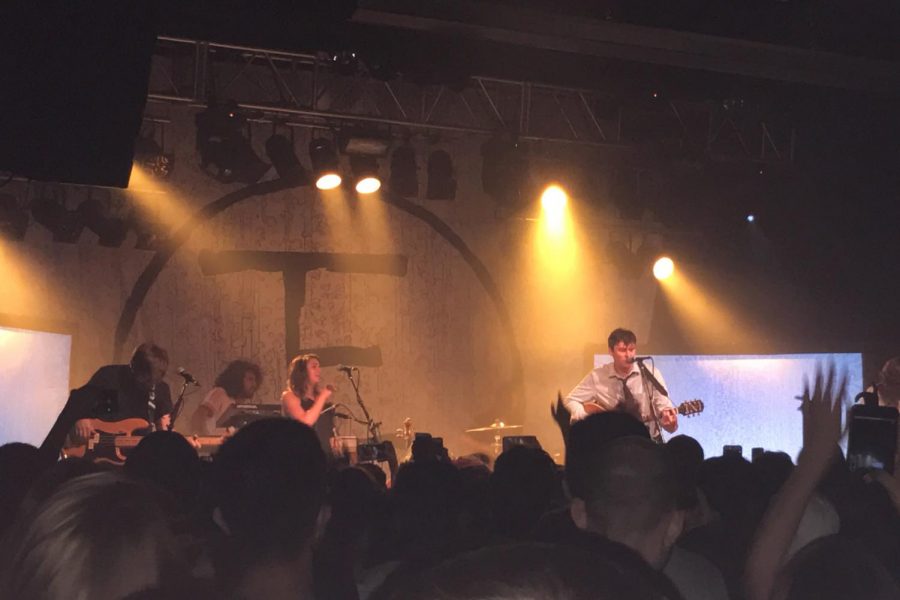 The Front Bottoms were performing at Starland Ballroom on Oct. 21. They are currently on a national tour promoting their new album “Going Grey.”

The Front Bottoms played a sold out show just outside of the city at Starland Ballroom on Oct. 21, about 30 miles away from where the band was first formed in Jackson, New Jersey. They are currently on an American tour promoting the release of their new album, “Going Grey.” The alternative/folk rock band attracts a very diverse crowd, but one thing is for sure — when the band started playing, everyone in the space became one.

The show had two opening acts. First up was Bad Bad Hats, whose chill and alternative sound provided a cheery accompaniment to the quickly populating bar scene at Starland. The other opener, Basement, was much more high energy, with a sound on the verge of metal music. The crowd became excited for the upcoming performance during Basement’s set.

When The Front Bottoms first got on the stage, there was a mad dash to the front, and a mosh pit quickly formed. The band opened with “You Used to Say (Holy Fuck),” the first track off their new album of the same name. Getting the crowd to scream curse words collectively created a sense of camaraderie in the venue. Everyone was dancing, jumping and screaming the lyrics to every song. The entire concert was extremely high energy, and it was more or less a huge dance party with hundreds of people. The band intermingled tracks off its new album with old fan favorites like “Flashlight” and “Skeleton.”

Hints of reggae and jazz were integrated into the band’s unique sound through the use of steel drums and trumpets that were used during different songs throughout the show. While singing their newest single, “Vacation Town,” island vibes transported the audience to a tropical getaway, and the crowd swayed and clapped their hands. The Front Bottoms are known for their interesting and unique mixing of sounds, as well as their unusual and somewhat absurd lyrics. This definitely came to light when the huge crowd started shouting the lyrics “one day you’ll be washing yourself with soap in a public restroom.”

Any audience member could tell just how happy the band was to be performing so close to home. Lead singer, Brian Sella, constantly interjected between songs to relay to the crowd how thankful he was to be there and how excited he was to play for everyone who attended. They truly created a very upbeat and positive atmosphere, consistently making the crowd excited for what was to come. Sella was truly dressed to impress with a button up shirt, tie and dress pants, telling the audience how he had just come from his cousin’s wedding.

The band ended with its most famous single, “Twin Size Mattress.” But, the crowd was not ready to give up. After much chanting, the band agreed to come back for a two-song encore, where they played “Jim Bogart” and “Ocean.” Reluctantly, after those last songs were played, audience members stumbled to their cars and headed home. Everyone left with a positive feeling and memory of a great, high intensity night, filled with energy that The Front Bottoms brings to every show.