‘Félicité’ is a Musical Beauty 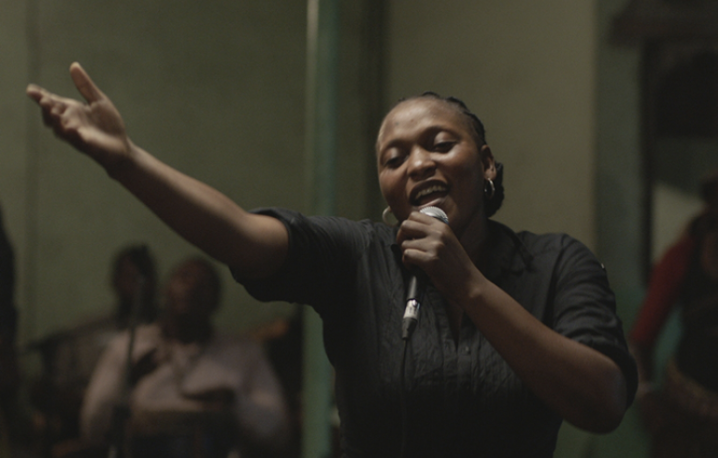 Félicité is a free-willed woman working as a singer in a bar in Kinshasa. Her life is thrown into turmoil when her 14-year-old son gets into a terrible car accident and in order to raise money to save him, she sets out on a breakneck race through the streets of electric Kinshasa – a world of music and dreams.

From its opening song in a club, the film “Félicité” chronicles the journey of a struggling mother in this drama from Senegalese director Alain Gomis. The titular heroine is a single, free-willed Congolese mother working as a singer in a nightclub. After her son is injured in a motorbike accident, Félicité (Véro Tshanda Beya) endures hardships and threatens her own sense of independence so that she can help her son heal.

The director first introduces us to Félicité as she is about to perform. The audience is immediately able to understand her demeanor through her powerful voice and free-flowing personality on stage. As a single mother, she overcame mountains to provide for herself and her only son while also pursuing her passion of singing. Beya is stellar in the role and often goes through multiple scenes with little to no dialogue, having to display waves of emotion with a single expression.

Gomis uses Félicité’s struggling interactions to flesh out the problems plaguing the society surrounding his main character, which includes the harassment a single mother experiences from men and loved ones. There are extended musical sequences where Gomis cuts away from the main character to documentary-like footage of impoverished Kinshasa (the capital of the Democratic Republic of the Congo); alternatively, the camera will follow Félicité, but then drift away to observe other tragedies happening around her. These sequences feel like poetry at times, with the director holding up a mirror on the socioeconomic disparity for ordinary people, including Félicité, who struggle with the system’s indifference to their troubles.

The film does encounter imperfections, though. The first half of “Félicité” is energetic — it watches the fervor with which the main character darts around the screen. Then, the film abruptly slows down as Félicité must rediscover her independence and adapt to a new life with her hospitalized son. Dialogue becomes sparse in the second half, and there are stretches where scenes are made up solely of Félicité’s various solemn expressions. In a sense, Gomis becomes overtly subtle and abstract in his visual storytelling. It takes time to adjust to this new pacing, but the film could have benefited had Gomis trimmed the narrative down by 15 to 20 minutes.

The film also introduces a possible romance between Félicité and Tabu (Papi Mpaki), a raucous regular at the bar where Félicité performs. Tabu is the only man in the film who does not try to control Félicité, but rather aids in her fight to help her son and often comes to her house to try and fix her refrigerator. Their dynamic, before and after it becomes romantic, is unconventional, but surprisingly does not feel forced.

“Félicité” is ultimately a poignant tale surrounding the economic situation and gender politics in the Democratic Republic of the Congo. Gomis’ film is bolstered by strong performances from his leads and extended musical sequences that convey his messages. However, had the second half been edited to allow for more focus, the final product could have been even more effective.