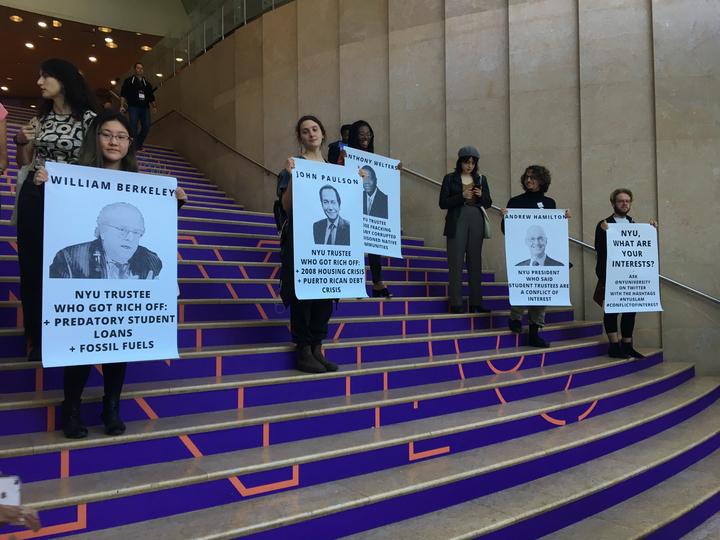 NYU SLAM members made posters outlining how members of the board have ties to other industries that could be deemed a "conflict of interest."

As NYU families and alumni poured into the Kimmel Center for University Life for President Andrew Hamilton’s first “State of the School” address, NYU’s SLAM offered a different perspective on NYU’s most senior administrators.

In response to Hamilton’s past claims that adding a student to the Board of Trustees would be a conflict of interest, several SLAM members rallied in Kimmel — holding posters that described various trustees’ alleged conflicts of interests.

Some trustees targeted in the protests included Anthony Welters, “whose fracking company corrupted and poisoned native communities,” John Paulson, “who got rich off of the 2008 housing crisis and the Puerto Rican debt crisis and William Berkeley, “who got rich off of predatory student loans and fossil fuels.” Protesters aimed to inform parents and alumni, who were visiting the school for Alumni Weekend and the intersecting Parents Day, about their cause. The group asked supporters to sign an active petition to get a student representative on the board.

The protest was held in Kimmel to reach parents and alumni attending Hamilton’s speech in NYU’s Skirball Center for Performing Arts. SLAM hoped to influence NYU donors and inform them about trustees’ ulterior economic ties.

“This is alumni/parents weekend,” explained Gallatin senior and SLAM member Hannah Fullerton. “So we want alumni and parents to know who is currently on our Board of Trustees, and why for some reason we would be considered to have conflicts of interests on the board just by representing our constituency of students. Essentially we’re asking NYU to explain what it’s interests are, and to let alumni and parents know — before they donate — that this is what our administration really looks like.”

“Hamilton has said that getting a student on the Board of Trustees would be a conflict of interest,” Wong said. “However, this is our current Board of Trustees, and they have lots of conflicts of interests including ties with fossil fuel investment companies, student loan companies, possibly ties to profiting off of the puerto rico debt crisis and to the 2008 housing crisis.”

Wong said that the purpose of the protest was to ask why placing a student on the board would be deemed a conflict of interest when current board members are not labeled as such.

“What are NYU’s interests?” Wong asked.

“Some have walked past without a care,” said Gallatin junior and SLAM member Tiger Kneller. “But others are quite surprised, especially when they realize the kinds of people who have a stake in this school, and that the kind of people who are making decisions at NYU have a lot of dedication to institutions outside of NYU.”

Kneller supported his position by explaining that 60 percent of the Board of Trustees is in the fields of real estate, law and finance, and only one member of the board has a background in education.

“Some [passersby] have been very enthusiastic but hesitant to officially sign our petition, but we’re hoping that by engaging them and by talking to them one on one, they will support us,” Kneller said. “The younger alumni seem a lot more enthusiastic than the older alumni — I think because they still have closer ties to NYU.”

“Probably nothing [will come out of the petition], but [a student representative] won’t be with big money,” Caits said. “The point is that unless politicians see votes they’ll do nothing … You ask someone for help, you get two things: silence or request for funds. So maybe a student representative would be supposedly less jaded or more idealistic. It can’t hurt.”

While SLAM has enjoyed the support of several alumni thus far, the group still hopes to recruit more undergraduate student support for its cause.

We hope that this gets out to current students,” Fullerton said. “Because we know that, of the 25,000 undergraduates, most don’t know that these are the people representing us and making decisions for us, so we need to increase the base of people who even know why this campaign is happening.”

Despite SLAM’s desire for increased undergraduate support, Kneller sees this particular movement as merely a step in the right direction, rather than an end goal. She believes that a student on the board would act not only as a decision maker, but also as a liaison between the board and the body it governs, which would allow students to have more of a stake in their university.

“Right now, our only stake is the dollars we pay for tuition, but we need to have a decision-making stake as well,” Kneller said.