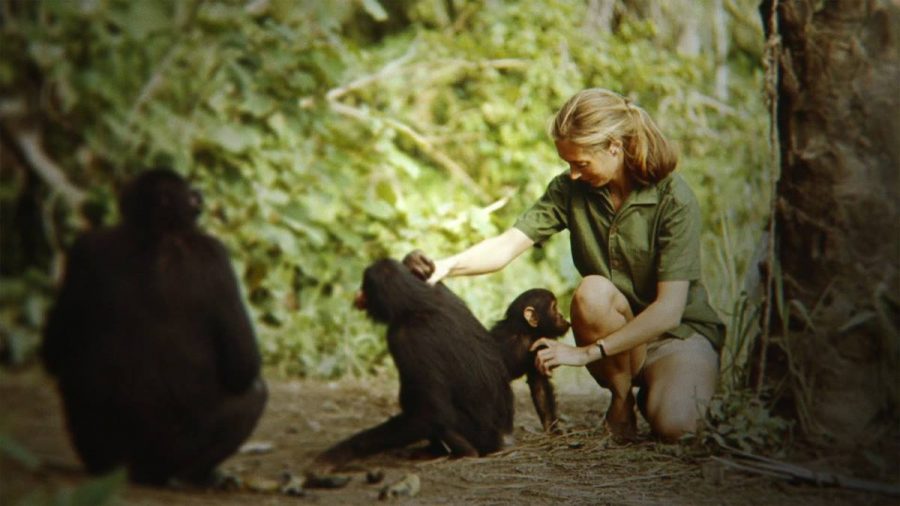 'Jane', a new documentary about Jane Goodall's 1957 expedition to Tanzania to find more information about chimpanzees and human ancestry opens in theatres on Friday Oct. 20.

In 2014, over 100 hours of footage was discovered from Jane Goodall’s 957 Gombe, Tanzania expedition to find more information about chimpanzees and human ancestry. Goodall was a 26-year-old secretary chosen for the expedition because of her love of animals by Kenyan born paleontologist Louis Leakey. Directed by Brett Morgen and set to a heart-wrenching orchestral score by Phillip Glass, “Jane” is an hour and a half of gorgeous and astounding footage that paints a beautiful portrait of Goodall’s remarkable expedition.

Intercut with a present day Goodall, the film switches between a young naive woman who is excited and curious to be immersed in the habitat of the chimps and a charming and knowledgeable woman in her 80s. Despite Goodall’s loneliness and frustration at the start of her journey — it took a substantial amount of time for the chimpanzees to accept her company  — she remained determined. After five months, Goodall was finally allowed into close proximity by the chimps. This was an essential turning point for the expedition; she was now, as she puts it, “able to explore a magical world that no human had before — the world of the chimpanzees.”

“Jane” is full of many striking moments. One in particular occurred when Goodall was still in the beginning stages of studying the chimps. She starts to have a connection with individual chimps, naming them and learning about their personalities as well as their community. There is a wonderfully hilarious scene where Goodall offers a banana to one of her favorites, whom she dubbed “David Greybeard.” At this point in time — the 1960s — it was generally accepted that human beings were the only creatures to have such distinctive brains with individual personalities and attributes as well as the ability to make tools. Goodall’s research changed that.

It is not only Goodall’s relationship with the chimps that is investigated in the documentary — the film also explores her relationship with Hugo van Lawick, a photographer sent by National Geographic. It is his stunning footage that was used to create “Jane.” Despite only having been sent for one assignment, Hugo proposed to Goodall in a telegram shortly after leaving “Chimpland,” the duo’s affectionate name for Gombe, and the two promptly married.

The documentary succeeds in its subtle expression of how much of Goodall’s life mirrors the lives of the chimps that she studies. In the beginning of Goodall’s journey, she was accompanied by her supportive and caring mother, who ended up creating a small clinic for the locals in Gombe. Goodall explains how closely her relationship with her own mother resembled the relationship she witnessed in a chimp mother and daughter. Goodall’s expedition not only changed the research of human evolution, but also changed her incomparable image.