SLAM Plans to Take Matters Into Their Own Hands 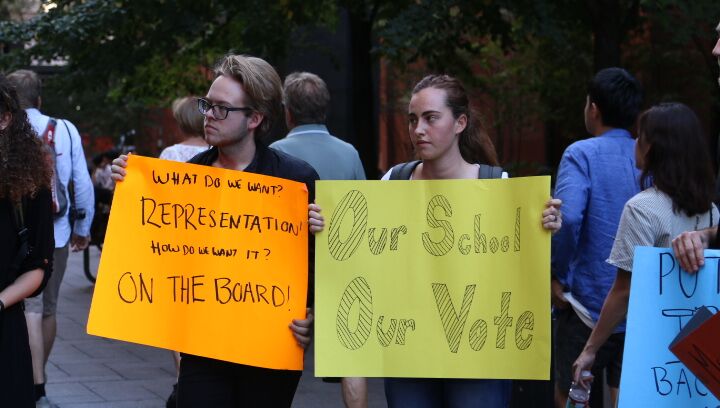 SLAM met in the park to discuss the different ways that the university could be more transparent.

After a three-month break from its campaign to get a student on the NYU Board of Trustees, NYU’s Student Labor Action Movement met in Washington Square Park this past Monday to continue discussing ways to increase transparency at the university.

Gallatin senior and SLAM member Brennan O’Rourke emphasized that they were not stepping down from last year’s mission.

“We’ll continue to work with the administration, but if they continue to show that they’re not open to this resolution, escalation will happen as it always does on campus,” O’Rourke said in an interview.

SLAM is focused on using escalatory measures, a tactic that worked well during their Fight for Fifteen campaign. They specifically plan to use strategies such as letter drops, demonstrations, sharing literature and directly targeting board members

After occupying a town hall hosted by President Andrew Hamilton last spring, SLAM said on Monday that it is time to intensify its efforts. However, they would still like to see the university support students.

“Hopefully they will join us in our goal to increase transparency and increase student representation at this university,” O’Rourke said.

As of today, SLAM has already joined forces with other groups on campus, including NYU Sanctuary and the Student Senators Council. However, these efforts have led to little action on the part NYU. After attempting to use NYU’s legislative process to affect change, SLAM now plans to use other means so that their demands are met.

“We went through the system, we had faculty and students on our side, and the school still has not listened,” one SLAM representative emphasized during the introductory meeting.

Gallatin senior and SLAM member Kendra Prat described the movement as a scale, with the balance in the favor of those on the board who hold most of the power at the university.

“Uniting in numbers can tip the balance in our favor,” Prat said during the meeting.

One way SLAM plans to increase numbers is to continue to hold Freedom Food events, where free food is given to the community to engage students in sharing their story.

CAS junior and SLAM member Rose Asaf reiterated the importance of these Freedom Food events, an effort to help the community at a ground level.

“Students go without food,” Asaf said. “The joke of students looking for free food events is actually a real issue. People rely on free food to get their sustenance for the day and I think that’s a problem.”

You can find these Freedom Food events on the SLAM Facebook page later in the semester. For the time being, the group is focused on demonstrating the need for these events to continue.

“Right now we are currently working out some matters with the student activities board regarding our budget for this,” Asaf said in an interview. “We just need to convince them that this is an integral part of who we are and what we do, and I believe we will do that.”

In the coming weeks, SLAM will be working on their first letter drop of the semester. They encourage any and all students to attend their next meeting and to voice what issues and initiatives matter to them. While this is a troubling and controversial time in the United States, Rose Asaf believes that SLAM is one of the best opportunities for NYU to come together.

“We’re going up against one of the strongest, most cooperate administrations of any university and all of the united states,” Asaf said. “Sometimes it’s hard not to feel small when you’re going up against The Man… but the people with whom I work are brilliant and inspired so they make all of it easier.”